Alex Robertson, a firefighter from Titusville, Florida, is taking the internet by storm by getting up close and personal with all manner of serpents 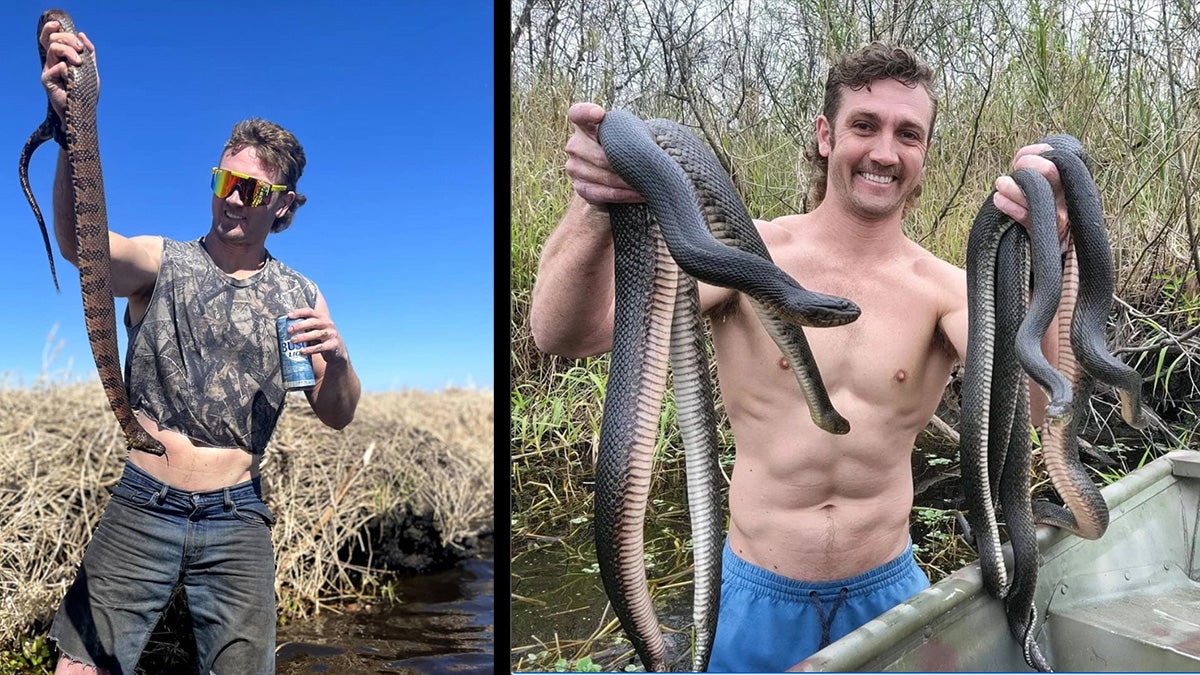 Herping is the act of searching for snakes and amphibians. Alex Robertson
SHARE

Alex Robertson does something that would freak most people out—and often, he does it shirtless. Robertson is a snake hunter—or herper—who looks for and catches snakes and reptiles in the wetlands of Central Florida. Though Robertson has a degree in biology, he’s a full-time firefighter and doesn’t make a living off of snakes. Rather, he snake hunts purely for fun—and he seems to have a lot of it based on the short videos he posts on social media. In fact, Robertson is quickly becoming an internet sensation for his snake hunting escapades, which often feature his classic mullet hairstyle, quick swims in snake- and gator-infested waters, and unusual grip-and-grins with a Busch Light in one hand and a big, old snake in the other. We recently spoke to Robertson about his passion for snakes, why they’re so often maligned, and more. Here’s what he had to say.

I liked bugs and stuff when I was little. I was flipping over rocks to look for slugs and worms. Beneath a rock, there was a little ring-necked snake. I didn’t know what it was and ran inside to get my mom. She hated snakes her whole life, but for some reason, she was like ‘oh, this is a good snake. Go ahead and grab it.’  She knew it wasn’t venomous. I picked it up, and from that second, I was hooked. It was the coolest thing ever.

I’ve always been kind of a freak. When I was growing up, nobody liked snakes around me. I was the odd one out. But when the internet came around with social media, I started getting connected with other people. I was like, ‘oh, you do the same weird thing as me. Let’s hang out and go find some snakes together.’

Herpetology is the study of reptiles and amphibians. Herping is just kind of short-hand for going out and looking for snakes, turtles, frogs, and lizards out in the wild. If you’re interested in getting into herping or snake hunting—I use the terms interchangeably—do your research before heading out. Try to learn the snakes in your area so you’re not going out and accidentally grabbing something venomous.

The majority of my snake stuff is just for fun. To equate it to fishing, sometimes you go out bass fishing, or look for redfish, snook, or tarpon. Well, I can decide to look for rattlesnakes, hognose snakes, water snakes, or whatever. Different species live in different habitats, so you have to target what you want to find.

Snakes really got me into animals, biology, and ecology. The more you learn about them, the more questions you come up with. Every time I go out herping, I see something new. I learn something new. I went to the University of Central Florida for college and got a biology degree. When I was there, I worked on a few different projects on snake species here in Florida, and I got to go down to Costa Rica for a month to do a project on palm pit vipers. They have five or six tree-dwelling pit vipers. We were able to find all of them.

I’ll take people out in the field to go snake hunting and they’ll be deathly afraid at first. Then, they’ll catch a few snakes and see, ‘oh, this snake’s not trying to bite my head off.’ They’re not all dangerous. Most of them don’t even try to bite when you grab them. They’ve all got different personalities. It changes a lot of peoples’ minds when they get to put their hands on and see them in the wild, versus hearing old wives’ tales about them killing everybody.

I’ve been bitten thousands of times. A non-venomous snake bite is really nothing. It barely hurts unless it’s like a 5-foot snake. They can draw a little bit of blood, but it’s not really a big deal at all. Sometimes I’ll let them chew on me in my videos because it’s funny and the blood goes everywhere. But honestly, most of our snakes are very mild-mannered and some of them don’t even bite when you pick them up. If you really don’t want to get bit, you can always grab snakes behind the head and restrain them like that. I don’t like to do that because it puts them in a compromising position. The last thing I want to do is hurt one of the snakes. I’d rather take a couple of bites than stress the snake out way too much by clamping down on them behind the head. I hate it when people do that.

I try not to be too much of a dufus. I used to be pretty bad about grabbing rattlesnakes and cottonmouths and just free handing them. But as I’ve gotten a little bit older, I don’t want to deal with hospital bills or possibly losing my fingers or arms. With venomous snakes, I’m a lot more cautious now. Usually, I’ll just let them be. Otherwise, I have a snake hook, which is like a golf club except with a little u-shaped hook on the end. That is a really good tool for manipulating a snake without putting your hands on them. If I see a rattlesnake crossing the road, I don’t want to reach down and get bit. I’ll just take my hook out of my car and scoop them off of the road before something bad happens.

I strictly do photography with the snakes, then I release them back where they were. Picking up the snakes for a few minutes is not going to harm them. They don’t have any lasting effects. Most of the snakes we find are crossing roads, so we actually save them from getting run over. Tons of snakes die each day on roads. I’ll put short videos up on Instagram because people like to watch them. Sometimes I play it up and act like a goofball, but I’m really just trying to have fun with my friends and catch some snakes.

I like to crush some Busch Lights when I’m out snake hunting. My goal is to become a Busch Light-sponsored athlete.

My favorite snake I ever caught was a rattlesnake species that lives in Costa Rica called the Central American Rattlesnake. It’s basically got a stripe down the first third of its body and then diamonds like a diamondback down the rest of it. That was such an awesome snake to see and one of my big targets when I was going down there. It’s going to be hard to beat.

Almost all of my friends who go herping have been bit by venomous snakes, but I have not…yet. I hope to keep it that way.  There have been a few close calls, which is not the snakes’ fault. If you mess with a venomous snake, they’re probably going to try to bite you. You’ve got to keep that in the back of your mind.

Florida is one of the top places for herping in the entire world. Up until the last few years, we had millions of people moving here and so much of our natural lands getting bulldozed. Florida had so much wildlife, and it still does in certain places. I’ve found more than 100 snakes in one night. We have around 50 different species of snakes including eastern diamondbacks, the largest rattlesnake species in the world, and eastern indigos, which get up to 8 feet long. People never see a lot of these snakes because they’re so cryptic, stay hidden, and live in remote areas. It’s like a treasure hunt to go find them.

A lot of our snakes and wildlife are already under enough pressure as it is because of habitat destruction. The last thing they need is for you to collect all the snakes you find to keep at your aquarium or sell to the local pet store. People poach snakes all the time. That’s totally uncool.

In firefighter school, my friends and I started growing mullets. Well, they all cut theirs, but I didn’t cut mine because I’m not a quitter. I love it. I wish I’d grown a mullet since I was a kid. I missed out on so much mullet lifestyle.