Australian Park Rangers Find Biggest Toad in the World, Then Quickly Euthanize It 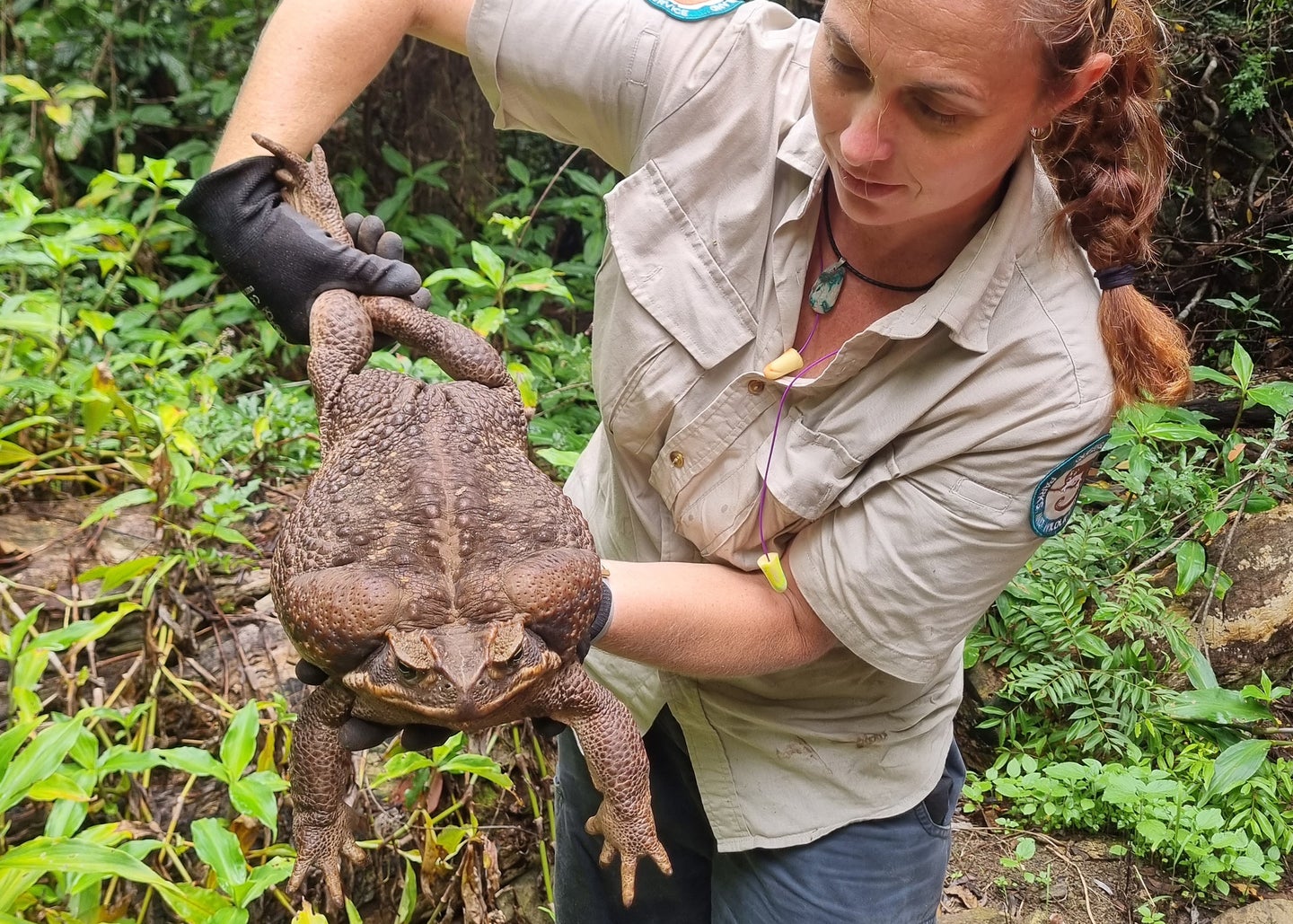 Park rangers in Australia dubbed the creature "Toadzilla" before removing it from the wild. Queensland Department of Environment and Science
SHARE

Park Rangers at the Conway National Park in Queensland, Australia, found what will likely prove to be the biggest toad ever caught and recorded. According to the Queensland Department of Environment and Science (DES), the massive amphibian, which rangers named “Toadzilla”, weighed in at 5.9 pounds. Because invasive cane toads pose a serious threat to the region’s native wildlife, the toad was euthanized shortly after it was discovered.

In a statement issued on January 20, the Queensland Department of Environment and Science (DES) said their rangers were conducting track work in the park near Airlie Beach last week when they encountered the toad along the road. “I reached down and grabbed the cane toad and couldn’t believe how big and heavy it was,” Ranger Kylee Gray said in the press release. “I’m not sure how old she is, but cane toads can live up to fifteen years in the wild—so this one has been around a long time.”

The rangers stored it in a container for removal, since the species is considered an environmental hazard by Australia’s 1999 Environment Biodiversity and Conservation Act. Recognizing that it could be a record, though, they brought it back to their base for an official weigh-in and to submit the proper documentation for verification. They said the toad was likely a female as they are typically larger than males.

Native to Central and South America, cane toads are considered the most damaging invasive amphibian on the planet. They were introduced to Australia in 1935 to combat the scourge of cane beetles that plagued sugarcane crops. But the omnivorous toads have become a far worse problem than the beetles they were meant to control. Known for their voracious appetites, cane toads are poisonous to anything that eats them. And females, like “Toadzilla”, can also lay up to 30,000 eggs in a season.

Read Next: Gigging Frogs with the “Frog Kings” of Upstate New York

According to Guinness World Records, the largest toad ever recorded was a pet cane toad named Prinsen, which was owned by Håkan Forsberg of Sweden. Recorded in March 1991, Forsberg’s toad weighed 5 pounds, 13 ounces and measured 1 foot, 3 inches from snout to vent. In the statement, the DES said they were pleased to have removed “Toadzilla” from the national park. They said on Twitter that they euthanized the toad humanely and have donated its body to the Queensland Museum.