The 5 Best States for a Hog Hunting Adventure

North America is home to millions of invasive wild hogs. Here are the best places to hunt them 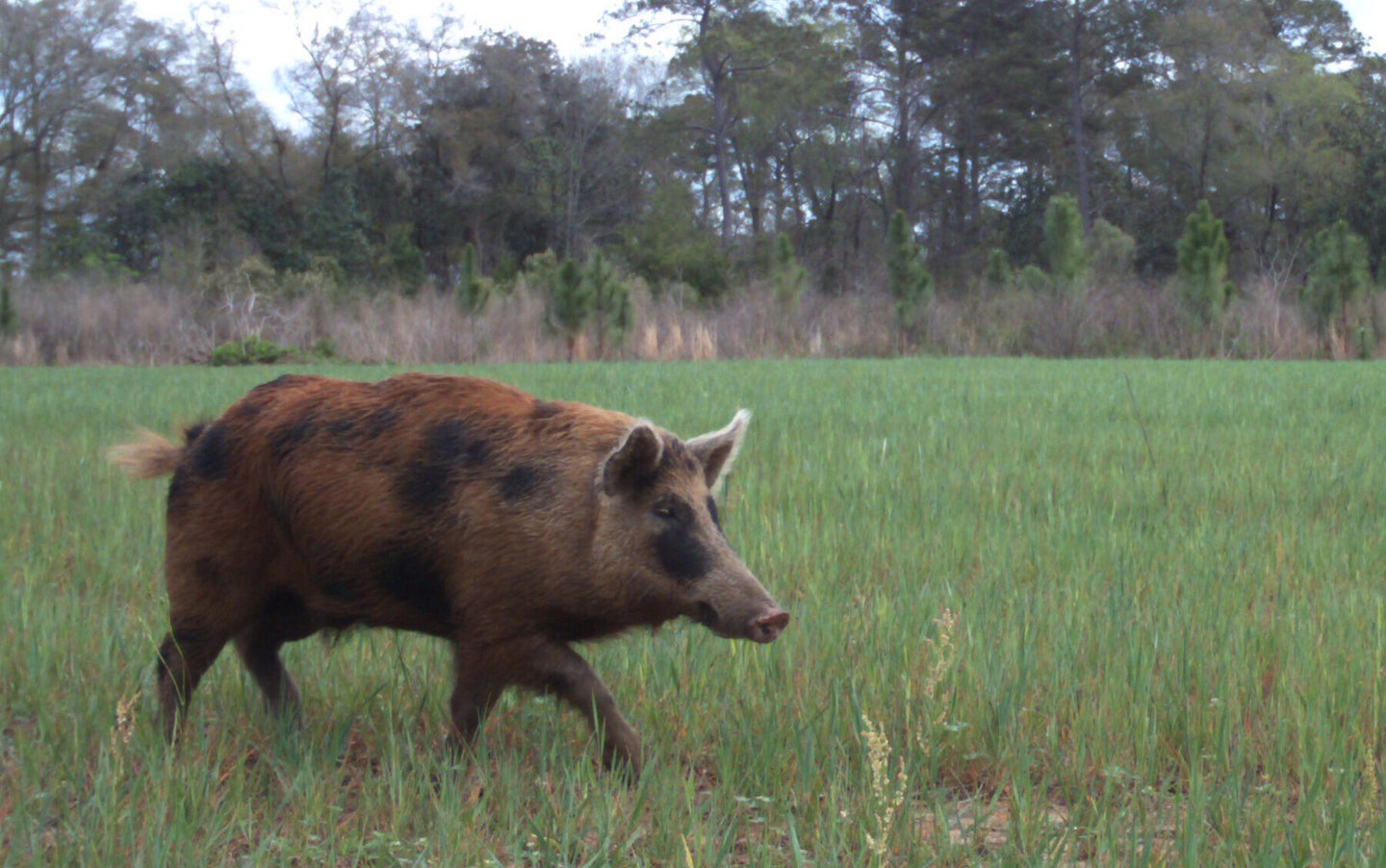 According to the USDA, the feral pigs roaming America today are a combination of escaped domestic stock, Eurasian wild boars, and hybrids of the two. Florida Fish and Wildlife Conservation Commission
SHARE

Wild hogs have inhabited North America since the middle of the 16th century. Brought over as domestic stock by early settlers, America’s earliest farm pigs escaped their enclosures and became feral in no time. The invasive and ecologically destructive species was bolstered even further with the introduction of Eurasian wild boars for recreational hunting in the early part of the 20th century. Since then, pig populations have multiplied rapidly across a wide swath of territory that stretches from the deep South, across parts of the lower Midwest, and all the way into California.

According to the U.S. Department of Agriculture, feral hogs now occupy some 35 states with an estimated population of over 6 million individuals. That population is rapidly expanding, and wild hogs cause roughly $2 billion worth in damages annually.

Read Next: Could “Super Pigs” Spread into the Northern U.S.?

All manner of coordinated efforts—from trapping and bounty hunting programs to aerial gunning and legalized night hunting—are being employed by wildlife management agencies in an attempt to reduce this population. But feral hogs are no gimme when it comes to putting hooves in the air. That said, if hog reduction is a challenge you’re willing to take up and you’re looking for a fun hunt, there are a handful of states where you’ll want to concentrate your efforts. Here are five of the best hog hunting states in America.

The Golden State is well-known for its excellent waterfowling, its big blacktails, and its copious flocks Rio Grande gobblers. But those with a penchant for things porcine will find that California has plenty to offer here, too—including some of the heaviest hogs in the nation. It’s estimated that the state’s hog population runs around 400,000. In an attempt to beat back the invasion, California just passed new legislation that does away with bag limits, lowers hunting license fees, and opens the door for the legalization of night-hunting for hogs.

Public-land hog hunting opportunities do exist in California, with many of these being draw or limited-entry hunts. According to statistics provided by the California Department of Fish and Wildlife, the top three hog counties with some degree of public access include Monterey, San Luis Obispo, and Kern Counties. But the Golden State’s best hog hunting opportunity is on private land. Fortunately, there are plenty of guides and outfitters to choose from, and you can still knock on doors and get access for a DIY hunt—especially if it’s hogs you’re after.

The Florida Fish and Wildlife Conservation Commisssion (FWC) estimates the state’s current wild hog population at roughly half a million animals, second only to Texas. But most ranchers and farmers would put the number much higher.

Florida offers a long list of WMAs that—unfortunately for area managers—support healthy if not booming populations of pigs. What’s more, the FWC does an excellent job of profiling these hog-hunter-friendly public lands on their website , including area-by-area harvest reports as recent as the 2021-22 season. WMA-specific rules do apply in some areas, but most allow hog hunting year-round, except during the spring turkey season.

According to the University of Georgia Extension Service, upwards of 600,000 wild hogs call the Peach State home. The service also estimates that those hogs do roughly $150 million worth of damage to private and public property every year.  Hog hunting regulations in Georgia are relatively relaxed and include a year-round season, no bag limit, night hunting, and the use of bait. Additionally, a special Feral Hog and Coyote season is held in the spring on all WMAs, unless otherwise noted.

Currently, the state boasts over 1 million acres of public hunting land. And like most states with wild hog populations, Georgia supports an impressive list of guides and outfitters, many of whom specialize in pig hunts.

According to the Alabama Department of Conservation and Natural Resources, wild hogs are present in all of the state’s 67 counties, where they’re causing an estimated $55 million worth of agricultural damage each year. Hog hunters will find more than 750,000 acres of public ground in Alabama, most of which welcomes pig chasers with open arms. Only a hunting license and a WMA permit are required to participate in the state’s year-round season with no bag limits. Hunting hogs over bait is now legal in Alabama, but those doing so must purchase and possess a Bait Privilege License, available anywhere hunting licenses and permits are sold. A DIY hog hunt on a WMA is a great option, and there are plenty of great outfitters in the state that specialize in hog hunting.

Of the estimated 6 million feral hogs now roaming the southern half of the nation, approximately half of them reside in Texas. According to the Texas Department of Parks and Wildlife, the hoofed invaders occupy every county in the Lone Star State minus El Paso, which sits on the far end of the state’s western panhandle.

Texas has some 1 million acres of public ground, with the majority of WMAs offering hog hunts in one form or another. Some are archery-only or special permit. Others, like the White Oak Creek WMA in Titus and Morris counties, provide essentially unlimited opportunities and no bag limit.

Read Next: Everything You Need to Know About Hog Hunting

Though most of the state’s 3 million hogs are found on private land, it’s not all that difficult to find a private landowner who (for a fee) will allow access to DIY hunters to hunt hogs. And dozens upon dozens of licensed outfitters offer reasonably priced guided and semi-guided hunts, including after-dark shoots with thermal optics. Or, if you got about $5K that’s unspoken for, you can always climb into the gunner’s seat of a nimble little helicopter, sit behind a belt-fed M60, and put a lot of pork chops and bacon on the ground.