Population Explosion of Canadian “Super Pigs” Could Spread Into the Northern U.S.

A cross between wild boars and domestic pigs, these feral swine can survive cold climates and could create a whole new pig problem for northern states 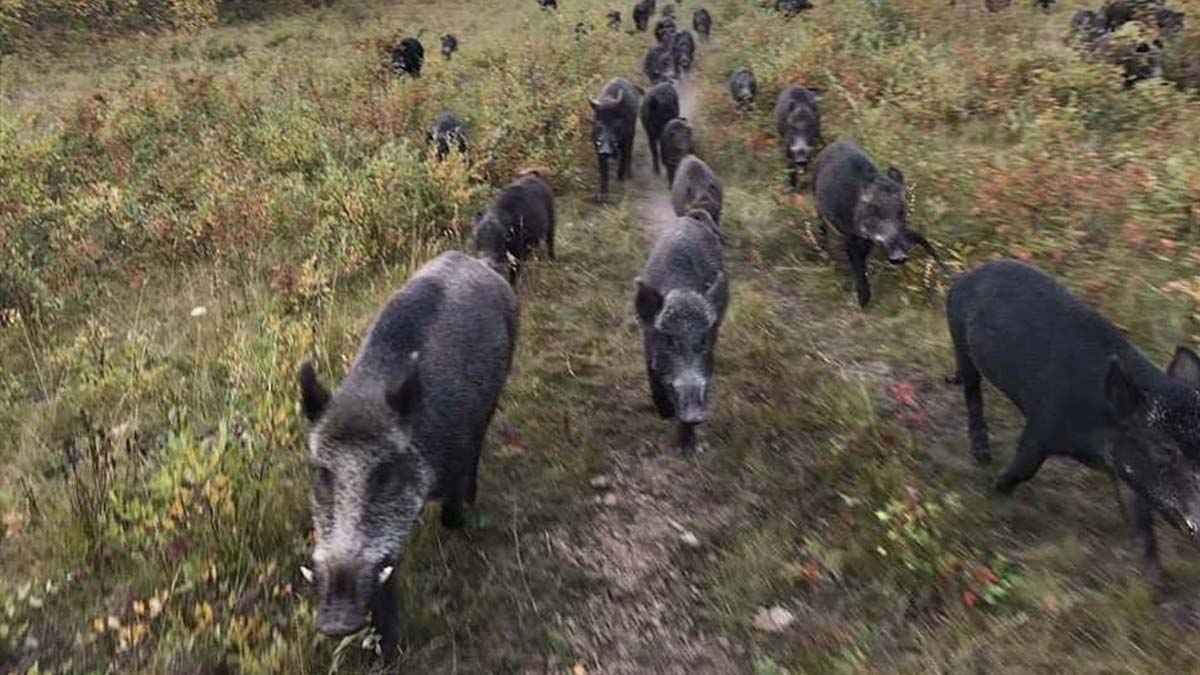 The U.S. may soon have a new wild pig problem. Until now, the invasive species has largely proliferated in warm places like the southeast, Texas, and California. But in recent years, invasive pigs have started thriving in Canada and may spread into North Dakota, Montana, Michigan, and Minnesota.

How Did Wild Pigs Invade Canada?

According to Dr. Ryan Brook, who leads the University of Saskatchewan’s Canadian Wild Pig Research Project, Canada’s wild pig problem is relatively new. “The U.S. has a 400-plus year history with invasive wild pigs, but we didn’t have any here until the early 1980s,” he says. “There was a big push to diversify agriculture with species like wild boards and ostriches. Wild boars were brought in from Europe to be raised on farms across Canada.”

Most of those pigs were kept on meat farms, but some were used on high-fence hunting preserves. Many farmers and ranchers soon crossbred the wild boars with domestic pigs. According to Brook, the hybridization resulted in bigger “super pigs” that could survive in cold climates. “For surviving in cold winters, one of the rules of ecology is: the bigger the better,” he says. “Larger body animals survive the cold better and have better reproduction in those conditions.”

In the early 2000s, the market for farmed boars dropped out in Canada. Some escaped from their enclosures and others were let free without anyone to sell them to. In less than 20 years, the wild—or feral—population exploded, in part due to the species’ extraordinarily high reproductive rate. Wild boars now roam approximately 620,000 square miles in Canada, primarily in the Prairie Provinces of Saskatchewan, Manitoba, and Alberta.

“That they can survive in such a cold climate is one of the big surprises of this issue. The Prairie Provinces are where we have the coldest winters in Canada except for the very far north,” says Brook. “One of the things they do to survive is tunnel under the snow. They go into a cattail marsh and channel into the soft snow and cut nests in the cattails. If you go early in the morning on a cold day, you can actually see steam pouring out the top of the nests.”

For native species, the issue is dire. “Wild hogs feed on anything. They gobble up tons and tons of goslings and ducklings in the spring. They can take down a whitetail deer, even an adult,” says Brook. “Originally, it was like ‘wow, this is something we can hunt.’ But it’s become clear that they’re threatening our whitetail deer, elk, and especially, waterfowl. Not to mention the crop damage. The downsides outweigh any benefit wild hogs may have as a huntable species.”

And unfortunately, the issue may soon spread into the Northern U.S. “We have already documented pig occurrences less than 10 miles from the U.S. border. Quite honestly, I think there have already been some in Manitoba going into North Dakota for the last 5 or 6 years,” says Brook. “There is no physical, biological boundary at the U.S.-Canada border. There is hardly any kind of fencing to speak of. There’s a real risk of pigs moving south into the U.S.”

What’s Next in Canada’s Fight Against Invasive Pigs?

Though there are no definitive population estimates, Brook says it’s already likely too late to eradicate wild pigs in Canada. Doing so, he says, would be “sort of like trying to eradicate mosquitos.” Still, local authorities are doing whatever they can to mitigate the spread of the invasive species. According to Brook, one of the most effective control strategies is ground-trapping entire sounders. His research team has also proven that using a “Judas Pig,” which involves following a GPS-collared pig to help find other pigs—so authorities can then remove them from the landscape.

Read Next: What Role Do Hunters Play in the Fight Against Feral Swine?

One thing that hasn’t proven effective is recreational hog hunting, which disperses sounders and causes some pigs to go nocturnal, making them harder to locate and remove. Brook says the most important thing people can do is to alert authorities. “Report any sightings of wild pigs,” he says. “There’s a Squeal on Pigs program in the U.S. and Canada. You can also report wild pigs to someone like your local game warden. Early detection and action are critical.”