10 of the Most Venomous Snake Species in the World

From rattlers to sea serpents to venomous vipers, these deadly snakes deliver a seriously potent—and toxic—cocktail of venom, bite for bite 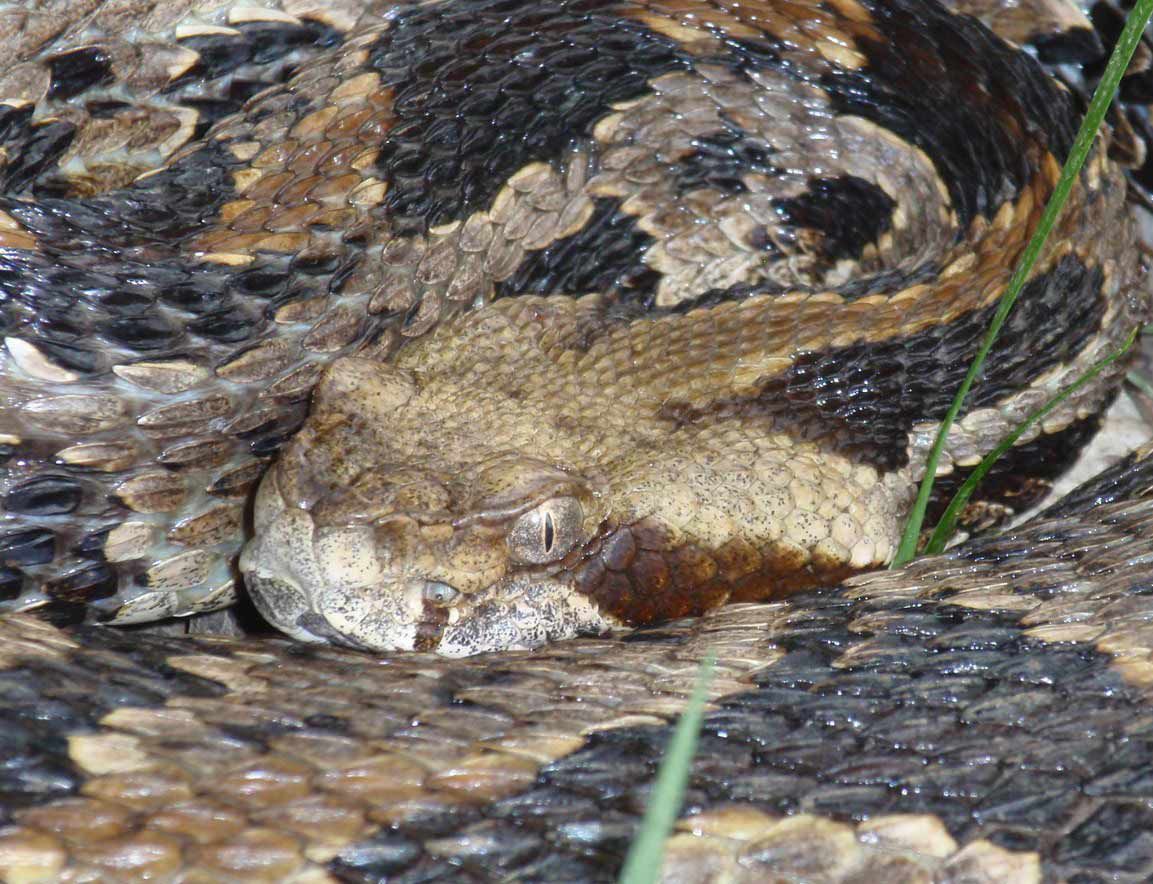 A timber rattlesnake is one of the most most deadly snakes in the world. Luke Welton
SHARE

“What is the most venomous snake in the world?” That’s a question that just about every outdoorsperson has either asked, or certainly wondered. Snakes are highly effective predators, and some species that rely on venom for hunting and self-defense can deliver a bite toxic enough to kill animals many times their size. The bite of a king cobra, for instance, can kill an elephant. Yet, despite the fear of snakes that has such a deep hold on the human psyche, the critters aren’t out to get us. “Snakes don’t attack people,” says Luke Welton, collection manager in herpetology at the Kansas University Biodiversity Institute and Natural History Museum. “They are most often startled or put in a situation where they feel the need to defend themselves, and they do so by the only means they have available—escape, musk, bite. It just so happens that the means these snakes have is venom.”

Read Next: Beware the Gaboon Viper—the Snake You Can’t See

The lethality of venom is determined by a range of factors including toxicity, how much is delivered in a single bite, and where on the body a bite is sustained. But a common scientific measure is LD50—the minimum lethal dose needed to kill 50 percent of animals in laboratory testing. Based on that metric, and focusing specifically on intramuscular bites (those delivered directly into a prey animal’s muscle), these are 10 of the world’s most venomous snakes.

Ranging from eastern North America to as far west as Texas, Oklahoma, and Kansas, the timber rattlesnake is the only rattler species in the populous northeastern United States and is considered endangered or threatened throughout much of that region. Found mostly in woodlands, timber rattlers prey on rodents, birds, insects, and amphibians and are known to hunt during daytime in spring and autumn, then switching to nocturnal hunts in warm weather. The snake’s highly toxic, and relatively complex, venom, long fangs, and high venom yield make it potentially one of America’s most lethal serpents. However, timber rattlers are generally considered shy and nervous and are quick to seek shelter when encountered afield. The species tends to rattle and feint extensively before striking, though it will stand its ground if harassed.

A notoriously bad-tempered snake, the Russell’s viper is responsible for roughly half of the fatal snakebites in its geographic range. That’s remarkable considering that its expansive distribution—from southeast Asia to the Indian subcontinent and east to Taiwan—overlaps with kraits, cobras, and several other noteworthy venomous snakes. The snake’s cranky disposition and its focus on rats and lizards (which often live close to humans) as favored prey might account for this lethality. Another contributing factor is the extreme complexity of the snake’s venom. “A Russell’s venom features a really unique cocktail of components that just hammers all parts of the body,” Welton says. “It’s definitely not a snake you want to tangle with.”

America’s most common venomous snake (and the source of more snakebites in the U.S. than any other venomous species), the copperhead can be found all across eastern and southern North America in a wide diversity of habitat ranging from uplands to woodlands to grasslands. The copperhead is a surprising entrant on this list, given its reputation for many bites and few fatalities. That might be explained by the relatively low volume of venom delivered in a typical strike. Young copperheads are wily hunters, wiggling their green-tipped tail to lure in small lizards and rodents. The neon tail tip disappears as they age. In confrontations with people, copperheads generally favor flight over fight.

Like the other three sea snakes on this list, the Belcher’s sea snake is found from the eastern Indian Ocean through southeast Asia and into northern coastal Australia. The species tends to stick to reef areas, where they prey on fish and go out of their way to avoid human reef divers and snorkelers. “All the sea snakes are relatively docile,” Welton says, “and you really have to pester them to get them to bite you.” In addition, the Belcher’s small mouth and short fangs mean any bite is unlikely to penetrate a wetsuit. If you do encounter one while snorkeling, Welton adds, “Appreciate it as a rare opportunity to see one in the wild, rather than a cause for fear. Unless you mess with it, it’s not going to mess with you.”

The common death adder is one of the deadliest snakes in Australia. But while fearsomely named, this snake annually causes fewer deaths Down Under than a wide range of animals—including kangaroos, bees, dogs, cattle, and ponies. Considered a master of camouflage, this ambush predator covers itself with leaf litter and debris, then lies in wait on the forest floor for small mammals, birds, and amphibians, using its tail—which resembles a grub—as a lure. Curiously, the snake’s appetite for amphibians is making it a lot less common: Adult death adders feed on the invasive cane toad, which is itself toxic, with poison glands that are deadly to the snakes and other reptiles, such as turtles and crocodiles, that feed on them.

The most common sea snake on the northern Australian coast, the olive brown can grow to 6 ½ feet long and can spend two hours underwater before it needs to surface for a breath. Found as deep as 230 feet, this snake more commonly prefers shallow reef flats, where it preys on fish, crabs, and prawns. Like most sea snakes, it has a paddle tail that helps it swim, but the olive brown’s tail also has light-sensitive photoreceptors, which are thought to enable the snake to stay completely hidden to avoid predators. Unlike rattlesnakes and other vipers, whose venom is primarily hemotoxic (causing severe tissue damage and internal bleeding), sea-snake venom is dominated by neurotoxins: A bite often causes little pain at the site but can cause massive systemic failures, including paralysis and respiratory collapse—often with a delayed onset that makes poisonings difficult to reverse even when antivenom is available. The snake’s preference for hunting the same night-feeding fish targeted by bottom trawlers makes it a potential hazard for fishermen hauling nets.

Sharing the same geographic range as the olive brown and Belcher’s sea snakes, the common yellow-lipped sea krait is one of the few sea snakes that comes ashore, which can make a moonlight stroll along a southeast Asian beach potentially perilous. “I’ve been to parts of Indonesia where it’s not uncommon on a good night to see 10 to 20 on the same stretch of beach,” Welton says. Relatively docile in water, they’re even less aggressive on land, because their movements are much more deliberate and awkward. “Most people who get bitten by these snakes likely step on them because they’re not watching where they’re walking.”

In southeast Asia, where the most toxic snakes are sea dwellers, the many-banded krait stands out as a deadly terrestrial species. A nocturnal hunter in lowland marshy areas that preys primarily on fish, the krait is also known to eat lizards, frogs, eels, rodents, and other snakes—including members of its own species. The extremely powerful venom, composed mainly of neurotoxins, has been estimated to produce mortality rates as high as 70 to 100 percent. In 2001, herpetologist Joe Slowinski died 29 hours after being bitten by a krait that had been misidentified as the white-banded wolf snake, a harmless krait lookalike.

Found near coral reefs and rocky areas along the sea shores of southeast Asia, this vibrantly colored 4-foot long serpent was the first venomous sea snake known to science, described by Linnaeus, the father of taxonomy, in his classic 1735 treatise, Systema Naturae. Blue-lipped kraits, docile and slow to bite, inject a venom dominated by postsynaptic neurotoxins that causes little or no local effects but can lead to paralysis, muscle damage, or bleeding within hours. The snakes are known for their unique strategy for keeping warm—by curling up in nesting burrows created by wedge-tailed shearwaters. Research shows the snakes use the body heat generated by the shorebirds to raise their own temperatures by 10 degrees.

Red touches black, friend of Jack. Red touches yellow, kill a fellow. That’s the rhyme millions of schoolchildren learned to warn them that the eastern coral snake is best left alone. Ranging throughout the southeastern and Gulf coasts in the United States, the coral preys primarily on reptiles, including other snakes. One of the few terrestrial venomous snakes in the United States with fixed, hollow fangs, it’s even less prone to confrontation than the copperhead, making it America’s least aggressive venomous snake. It’s also a prime example of an evolutionary strategy known as Batesian mimicry: A harmless mimic (in this case, several species of milk snakes) takes on the physical appearance of a noxious model (the eastern coral snake) to protect itself from predators that have evolved to steer clear of red and yellow snakes.

What Does It Feel Like to Be Bitten By a Rattlesnake?

Now that you’ve read about the most venomous snake species in the world, it’s time to read about what it’s like to be bitten by a venomous viper. While stalking trout along Colorado’s Dolores River, flyfisherman Todd Field was bitten on his ankle by a rattlesnake. Here is his story:

This happened a few years ago, before my wife and I were married. I picked her up for a date one night, but before leaving I took my wading boots out of the truck because I didn’t want the car to stink. A few days later, I had plans to fish the Dolores River in southwest Colorado, and only after I’d driven the three hours did I realize that I’d forgotten my wading boots. So I decided to fish in my sandals.

I was walking up the river and spotted some big trout rising, and as I stalked into casting position, I felt a light prick on my right ankle. I thought it was just a thorn, but when I looked down there was an 18-inch rattlesnake coiled inches from my feet. I swear I jumped 15 feet in a single bound.

For a minute I thought maybe I could continue fishing and my weekend wouldn’t be ruined. Then I thought, You just got bitten by a venomous snake. Get to a hospital! So I drove to the hospital in Cortez about 30 minutes away. By the time I walked into the ER I was already limping. Fortunately the doctors couldn’t detect any venom. The snake only got me with one fang, and it was classified as a “dry bite.” Still, it was a severe injury. My leg swelled 50 percent larger than its normal size, and the entire leg was purple, black, and yellow. It was the worst pain of my life. I was on crutches for two months and needed physical therapy to get it working again. My summer was ruined.

I guess I got off pretty easy, though. I can’t imagine a two-fang bite.