They move slow enough for you to step on but strike with lightning speed. The Gaboon viper has the largest venom supply of any snake in the world. 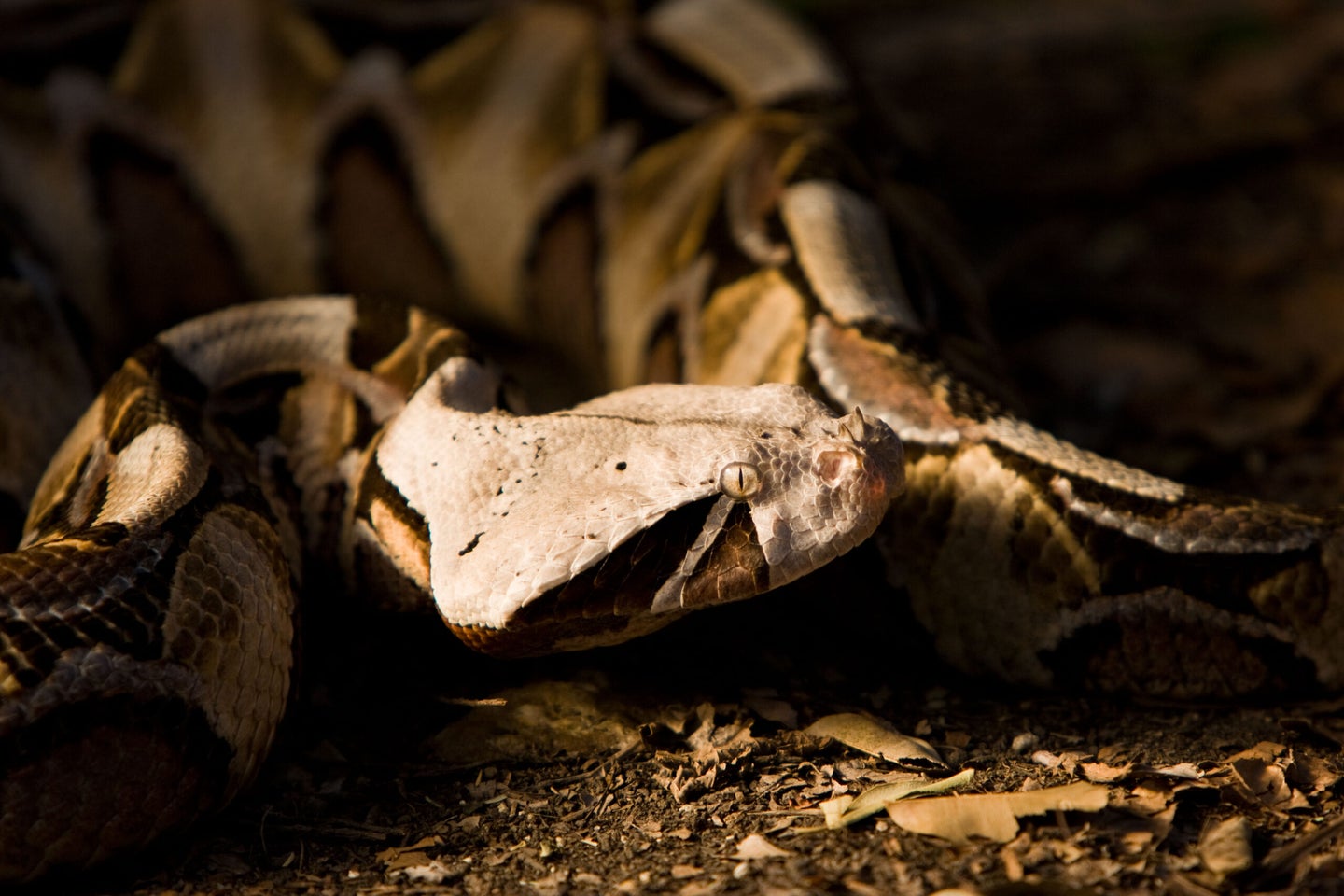 I don’t know why I happened to be thinking of venomous serpents; perhaps because the 2020 presidential election is much in the news. But anyway….

The worst snake fright I had in Africa came in a serpentarium that used to lurk in Victoria Falls in Zimbabwe. The awful beasts were housed in plexiglass boxes, and there was such a box right at eye level that was home to a Gaboon viper.

In case you haven’t met one, it’s the heaviest (18 pounds typically, and up to 25) venomous snake in Africa with a body nearly as thick as a man’s thigh, a length of 6 feet, a small neck, and a massive, wedge-shaped head. Its scales are brown and tan with an edging of pink and purple, arranged in diamond patterns.

You’d think that you would see something like this at a glance, but you’d be wrong. The plexiglass box was lined with dead leaves, and, from perhaps a foot away, I could not see the massive serpent lying among the debris. Finally, it blinked an eye, or flicked its tongue, and it came into focus. I realized that, in the wild, I could be standing on one and still not see it until it asked me to get off, viper fashion.

The Gaboon viper is a creature of contradictions. On the one hand, it has the longest fangs—2 inches—of any venomous snake on earth. The fangs are so big that, after striking, the viper swings them up into the roof of its mouth and then has to work its jaws around to get them back into place.

To compliment the fangs, the Gaboon viper also has the largest venom supply of any snake including the king cobra, which has enough to kill an Indian elephant. It’s a cytotoxic venom similar to that of rattlesnakes, and while it’s not among the most lethal of venoms, roughly 1/1000th of what you get from milking a Gaboon viper is enough to kill a human. It also produces one of the most agonizing snakebites in the animal kingdom.

Despite the fact that it’s sluggish and slow-moving, the Gaboon viper has one of the faster strikes around; its head moves at between 175 and 200 mph. It also hangs on. Unlike the mamba, which administers multiple bites in fractions of a second, the viper takes hold and lets go only when whatever it has bitten is taking leave of Earth.

On the other hand, Gaboon vipers kill few people. They are creatures of the subequatorial African forest, are not common, and are possessed of a tolerant and forgiving nature. Unlike the puff adder, which will cheerfully strike at the slightest provocation and kills more humans than any other African snake, or the black mamba, which is territorial, aggressive, and bad-tempered, the Gaboon viper is not much of a threat.

The perfect illustration of this came, of all places, in Washington, D.C., in April 1983. A 16-year-old named Louis Morton stole two Gaboon vipers from the National Zoo, smashing their glass case and stuffing them into a plastic garbage bag. The snakes, which were not yet fully grown, took this well enough, but when Morton boarded a city bus and slung the bag over his shoulder, the vipers finally decided that enough was enough and one of them bit him in the shoulder.

Morton realized he was in Big Trouble and told the bus driver what was going on. He was rushed to a hospital and saved by heroic efforts, and the snakes were returned to the zoo.

If you’d as soon not steal one, you can buy a farm-bred baby Gaboon viper for only $100. They require little maintenance and can live to be 20 years old. But before you do, consider the case of the late Anita Finch, 33, of Van Nuys, California, who obtained a 2-footer in Texas and added it to the menagerie of dangerous snakes she kept in her trailer. She was apparently handling the animal without a snake stick when it bit her in in the hand. She did not make it to the phone to call 911. Finch had previously been bitten six times by her rattlesnakes, and apparently believed she was now immune to venom.