The surprising visitor is considered "one of the most endangered mammals in the United States." 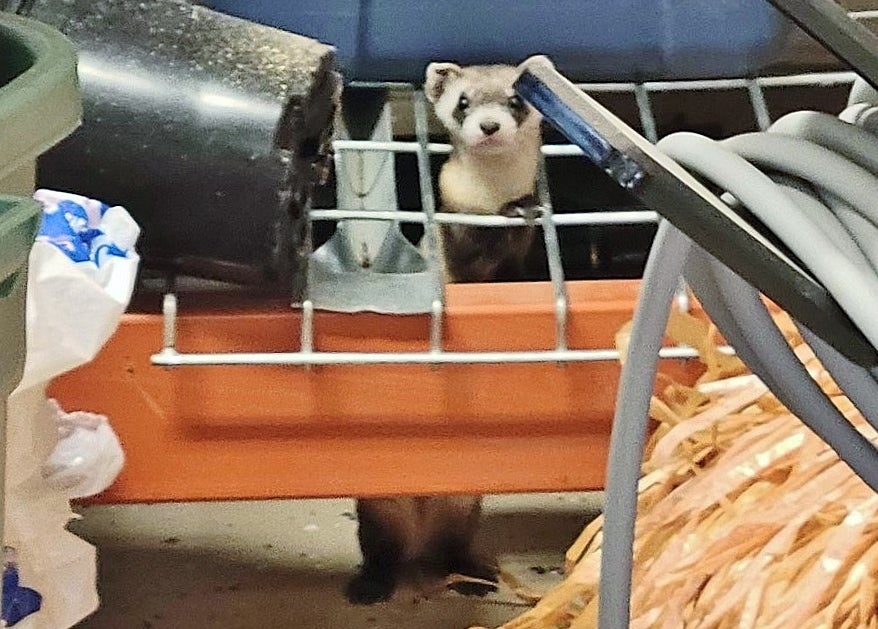 It’s not uncommon to find little critters taking shelter and looking for food in your garage, but most people find unwanted pests like rats and mice. A man in Colorado, however, stumbled upon a particularly rare animal on Monday, November 8, in his home’s garage. He encountered a black-footed ferret and coaxed it into a box before calling Colorado Parks and Wildlife (CPW).

The black-footed ferret is often considered the rarest mammal in North America and according to the U.S. Fish and Wildlife Service (USFWS), is “one of the most endangered mammals in the United States.” In fact, black-footed ferrets were declared extinct in 1979 before a remnant population was discovered in 1981 in northwest Wyoming. That remnant population was used to form the “seed stock” for a captive-breeding recovery program that has spanned decades and recently, even involved a genetic cloning effort.

The ferret found in a man’s garage in Colorado was part of a CPW reintroduction program in tandem with the USFWS’s greater black-footed ferret recovery initiative. The ferret was found in Pueblo West, which is near a tract of land called Walker Ranch, where more than 120 black-footed ferrets have been released since 2013. Reintroduction efforts were put on hold in 2020 due to COVID-19 but were recently restarted, and two weeks ago, CPW released nine ferrets near a 1,600-acre prairie dog colony. Before being released, the black-footed ferrets have a passive integrated transponder microchip inserted between their shoulders. A scanning device showed the garage-invading ferret was one of the nine ferrets most recently released on Walker Ranch.

“We don’t know exactly why this black-footed ferret left the colony,” said Ed Schmal, CPW conservation biologist, in a press release. “We put them into prairie dog burrows, but they may not stay. Sometimes they scramble around the colony to find the right home. This one might have gotten pushed out by other ferrets, and it went looking for a new home. We really don’t know.”

The ferret did not appear to have any signs of injury and was again released back into the wild. Through its recovery effort, CPW has never received any similar reports of a black-footed ferret entering a garage or similar human-made structure.

“This is extremely rare,” Schmal said. “Black-footed ferrets are nocturnal and extremely shy. For some reason, this one left the colony and was seeking shelter. We’re just glad it appeared healthy, not starving or sick, and we were able to capture it and return it to the colony.”