This is the first-ever evidence of any animal in Florida preying upon Burmese python eggs—or, as one scientist put it, "native wildlife fighting back" 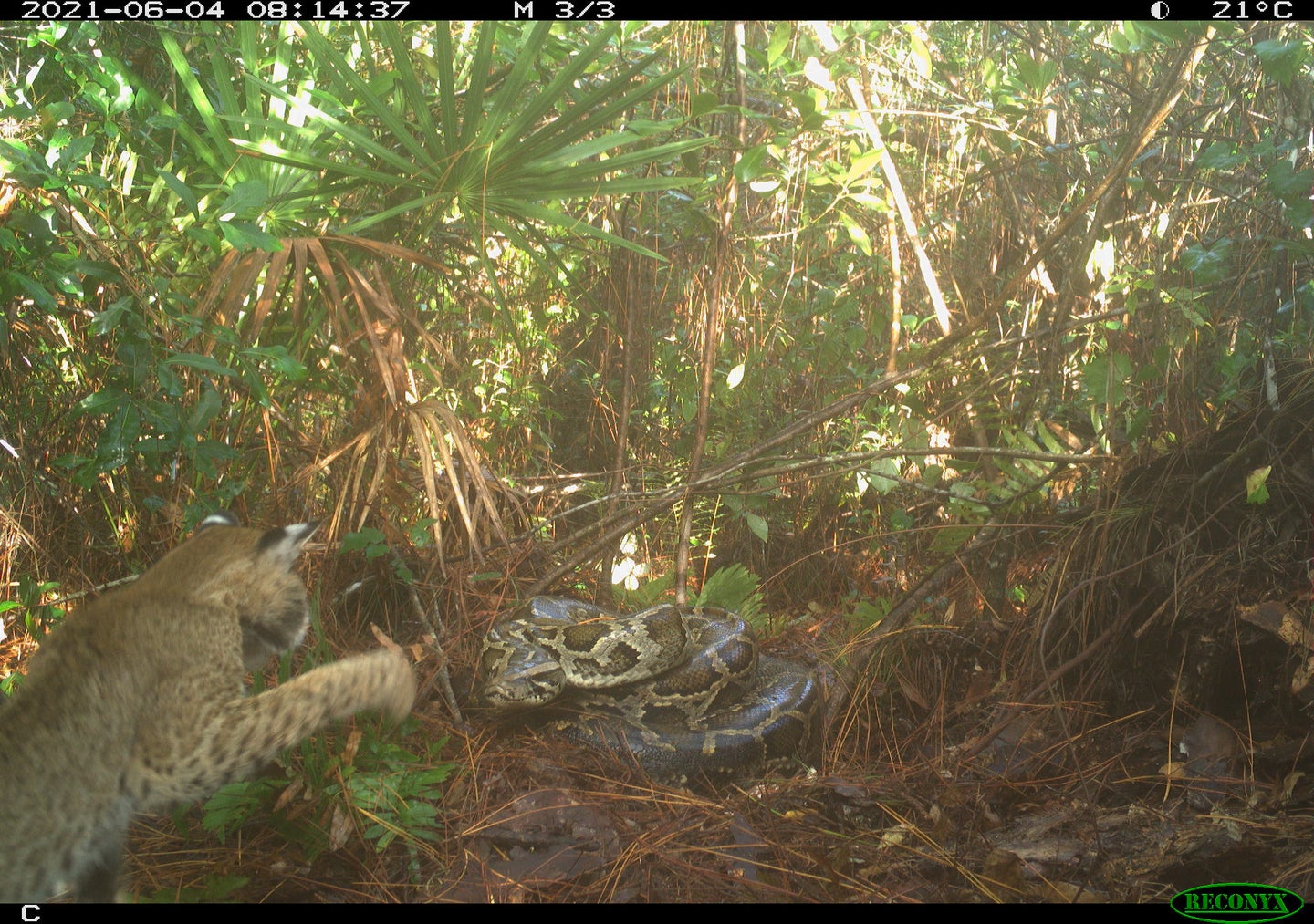 The bobcat was estimated to weigh only 20-pounds, and the python was 14-feet long. USGS
SHARE

Last year, a group of scientists recorded the first evidence of a bobcat raiding the nest of a Burmese python in the Florida Everglades. In June 2021, researchers captured a series of trail cam photos at Big Cypress National Preserve. They recently published their findings—and the collection of stunning photos—in a study in Ecology and Evolution. It’s the first time that any animal native to Florida has been witnessed preying upon the eggs of Burmese pythons—which have been quickly spreading throughout the Everglades, posing a severe challenge to the ecological health of the famed wetlands.

On June 1, 2021, the researchers deployed a motion-triggered trail cam at the nest of a 14-foot female python. That same day, a 20-pound bobcat was seen at the python’s nest while the big snake was away. Over the course of the next two days, the bobcat could “be seen repeatedly approaching the unguarded nest and consuming, trampling, caching, and uncovering the eggs,” according to the study’s authors. On the night of June 3, the bobcat tried to raid the nest while the python was still there—and the two animals briefly faced off before the bobcat retreated. But the next day it returned, and the trail-cam photos seem to show the python striking the bobcat. The cat then swipes at the snake a couple of times but is unsuccessful in pushing her off her nest.

The study’s authors note that this interaction is not only the first time a bobcat has been seen scavenging a python nest—but that it’s also “the first recorded instance of a Burmese python actively defending a nest.”

On June 15, the researchers returned to the python nest to reset the camera. They moved the snake from the nest and retrieved 22 “damaged but potentially viable eggs” to bring to the lab and left the remains of 42 destroyed eggs at the nest. They incubated the potentially viable eggs—but none of them hatched, though other eggs from similar python nests did. This suggests that the bobcat had, in effect, completely sabotaged the invasive female python’s reproductive efforts.

“When you get interactions like this and see the native wildlife fighting back, it’s like a ray of sunshine for us,” Ian Bartoszek, an ecologist with the Conservancy of Southwest Florida, told National Geographic. He also highlighted another recent study that showed how native cottonmouth snakes prey upon newly-hatched Burmese pythons.

“When we see something like this, it’s so exciting,” added Andrea Currylow, a U.S. Geological Survey ecologist who led the recent study. “The native species are learning, they’re adapting, [and] they’re able to be more resilient to an invasive species.”

Bobcats are widely dispersed throughout North America and in Florida’s forests and swamps. They typically hunt at night and eat small mammals such as squirrels, rabbits, and rats. The U.S. Geological Survey calls Burmese pythons, which were first brought to Florida as exotic pets, “one of the most concerning invasive species in Everglades National Park” because of their tendency to prey on native mammals.