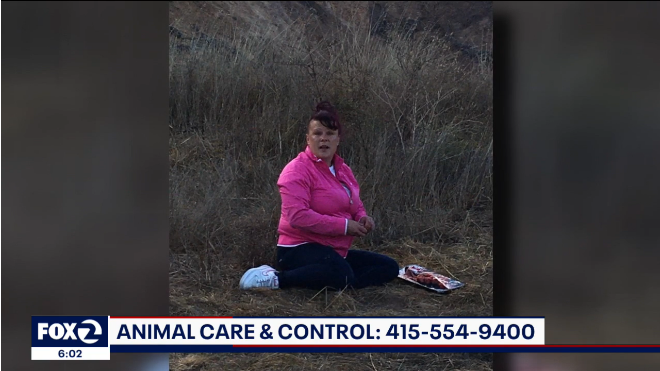 San Francisco Animal Care and Control officials are howling about a woman who was photographed this week feeding raw meat to the city’s coyotes. They posted, essentially, an all-points bulletin with a KTVU Fox 2 video on their social media sites asking the public to help identify her.

The images show the woman sitting on an overgrown slope at Bernal Hill, one of the highest points in San Francisco. The hill’s upper portion includes Bernal Heights Park, which belongs to San Francisco Recreation and Parks. The woman appears to have several pieces of raw meat on a tray covered with aluminum foil. Coyotes are nearby. Virginia Donohue, executive director of Animal Care and Control, reportedly told the San Francisco Chronicle that the same woman may also be feeding coyotes in the city’s McLaren Park.

Reports of coyotes wandering around San Francisco streets have been common in recent years, with 313-acre McLaren Park being particularly attractive to the wild dogs. San Francisco doesn’t have a huge coyote population. Estimates range from 70 to 100 depending on the source, but the animals appear to be increasingly bold around humans, with some stalking children and others randomly biting.

Earlier this year, the city called in federal officers from the U.S. Department of Agriculture’s Animal and Plant Health Inspection Service after one coyote charged toddlers five times at San Francisco Botanical Garden. The coyote was euthanized after it was deemed a threat to public safety. The animal was routinely fed, illegally, by humans.

One aggressive coyote bit five people—three adults, and two young children—in an eastern suburb of the San Francisco Bay. DNA from bite wounds and clothing showed it was the same animal. In February, the coyote bit and scratched a three-year-old girl’s back, leg, and buttocks, leaving the youngster traumatized and undergoing multiple medical procedures, including a series of four rabies treatments. The Chronicle reported that the attacks occurred in a neighborhood near the Lafayette Reservoir and its 928 acres of open space.

A report last year by SFGATE noted that, for many years, police officers used to kill coyotes that crossed the Golden Gate Bridge. Once that control stopped, the animals began making dens around the city. Amy Corso, field services supervisor for San Francisco’s Animal Care & Control, said in 2020, “We’re getting more reports of people being uncomfortable with the amount of [coyote] sightings, seeing them walking by so close to them.” Corso said there have also been reports of coyotes killing small pets left in the backyard, and she encourages residents to not leave cats and small dogs unattended outdoors, especially at night.

“This is 100 percent a human problem,” Donohue told the Chronicle. “We have too many people feeding coyotes or trying to befriend them. Ultimately it ends badly for the wildlife.” Donahue went on to say that the woman feeding the coyotes is a problem, stating, “We need to reach her to put a stop to this behavior.” The woman will likely receive a warning, with subsequent violations resulting in a substantial fine.