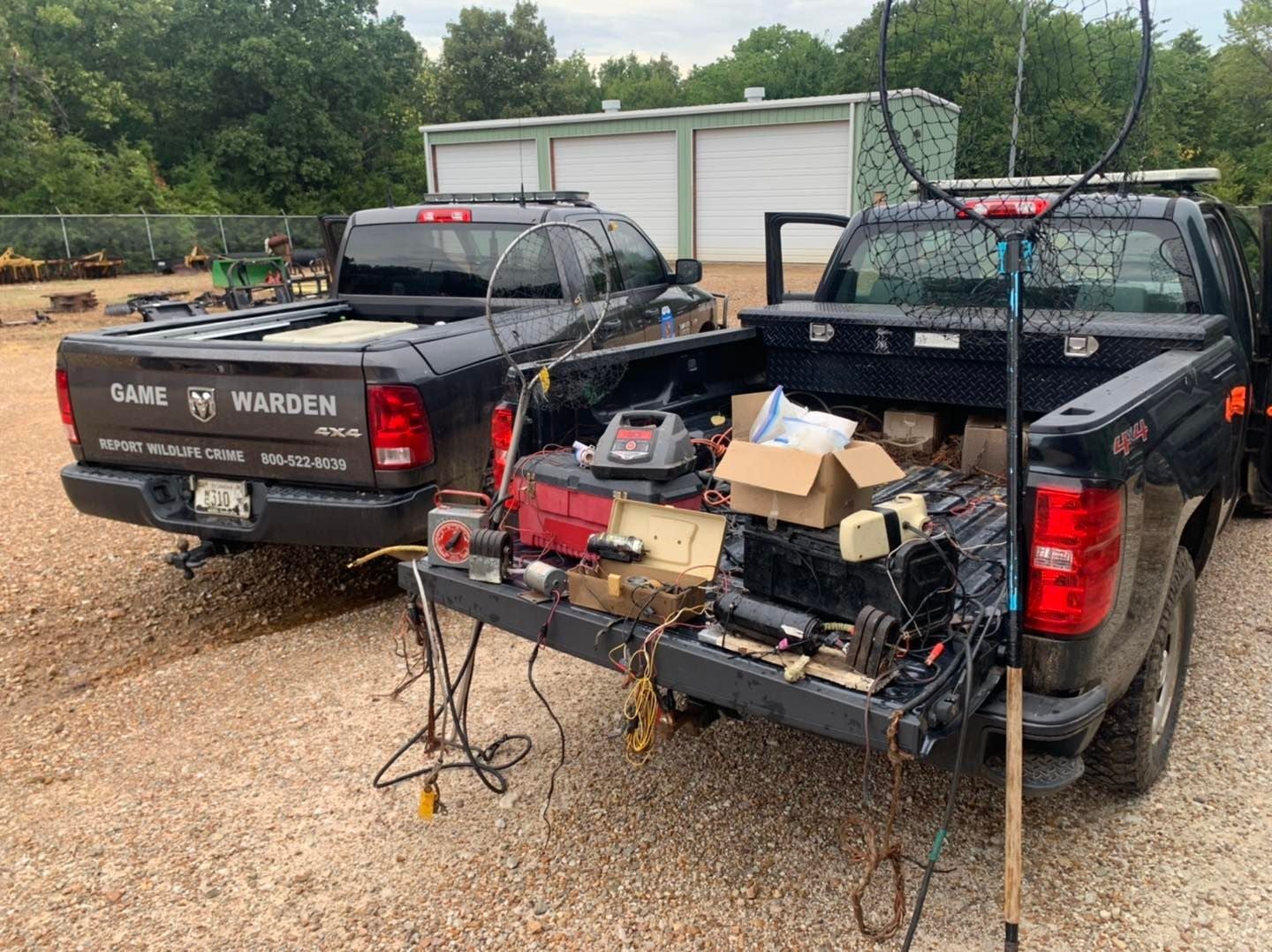 Jay Harvey was bass fishing on Hugo Lake in southeastern Oklahoma on the morning of August 8 when he spotted something suspicious. “My son and I were pre-fishing for a tournament that we’ve got coming up on the lake,” Harvey told F&S. “At the end of the dock there was a tackle box with a bunch of wires protruding out of it, and what looked like an electric motor was sitting next to it.”

“I saw these big dip nets and that’s another obvious clue of people that are shocking fish,” Harvey said. “ My son said, ‘Dad, there’s a telephone right there.’” The “telephone” that Harvey is referring to was actually just the inner parts of an antique wooden box phone. In southeastern Oklahoma and other parts of the southern United States, the guts of antiquated crank phones are sometimes used by fish poachers to send electric currents into the water that temporarily stun fish,  sending them floating to the surface where they can be netted A more formal version of the strategy is often employed by state wildlife biologists when conducting research on freshwater fish species. Recreational “electrofishing”, was outlawed in most U.S. states by the 1950s.

Harvey’s Tip Leads to an Investigation

Harvey and his son quickly alerted Choctaw County game warden Andrew Potter, who called his partner Jim Gillham. The two wardens went to the marina to interview the staff. They found out that the owner of the electrofishing equipment had a houseboat nearby and staked out in the parking lot for six hours until he showed up. “Once he showed up and walked down to his houseboat, we made our initial contact,” Potter said.

According to Potter, the accused fish shocker was primarily targeting catfish. “Catfish are really susceptible to the electric current, and this area—the Kiamichi and Red River Basins—are kind of ideal shocking conditions,” he explains. “They have good sandy bottoms and good water temperature. When you get a little flow, that can be pretty ideal for shocking fish.”

Read Next: Five Poachers Busted with 665 Catfish in Louisiana

Potter says that fish shocking is a long-standing cultural tradition in southeast Oklahoma despite it being outlawed for several decades. He and Gillham average about four fish shocking busts a year in their jurisdiction. “We know a lot of folks that are in their 80s and 90s, and if you were fishing back [when they were young], you were either netting or shocking fish,” he said. “Most of them use old bar telephone buzz boxes, grandpa built it kind-of-things.”

During the course of the investigation, the accused electrofisher forfeited at least three fish shocking devices, multiple wire lead sets, two dip nets, and a cardboard box full of frozen catfish filets. The culprit could face fines in excess of $1,000 and up to 30 days in jail.