Researchers say that coelacanths, which were once thought to be extinct for 66 million years, use a technique called “headstand drift hunting" to catch cephalopods and fish 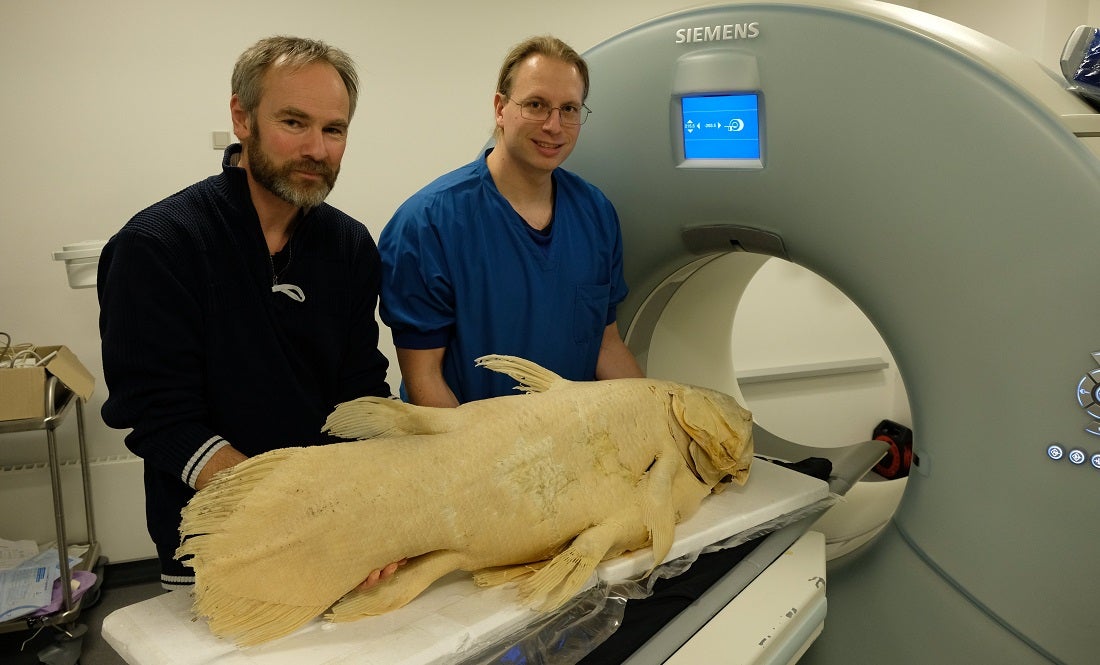 Researchers recently increased their understanding of one of the world’s rarest fish. Using CT and MRI scanners, they were able to expose the physiology of a coelacanth (pronounced SEE-l-kanth) and—found something surprising. The rare, endangered, deep-sea fish is designed to attack its prey while swimming upside down. The scientists call it “headstand drift hunting.”

“It’s quite unique,” Henrik Lauridsen, Aarhus University Department of Clinical Medicine associate professor in Denmark said in a press release. “The heaviest parts are at either end of the fish, which makes it easy for the fish to stand itself on its head.”

Coelacanths have a lot of bone in their heads and tails and minimal vertebrae, so they can cruise vertically with their heads pointed toward the ocean floor as they scan for food—typically cephalopods and small fish. They’re also missing a swim bladder. The fish typically live in caves more than 600 hundred feet deep. Lack of a swim bladder makes them less buoyant so they don’t have to fight as hard to stay down so deep.

Their depth preference also keeps them well hidden from people. A specimen netted in 1938 by a South African fisherman was thought to be the first look at an animal that was previously suspected of being extinct for 66 million years. Only about 300 other coelacanths have been caught worldwide since then. For the recent study, researchers used a specimen that was preserved for more than 60 years.

“Instead of going out and catching new coelacanth, which are both rare and protected, the modern scanning techniques have allowed us to perform exciting new analyses, despite the animal having been submersed in alcohol for decades,” said Peter Rask Moller, University of Copenhagen Natural History Museum of Denmark associate professor and curator. “Having museum collections of rare animals is like entering the world’s best secondhand store, with the wildest array of recycled things that can no longer be found new.”

Read Next: Fisherman Snags 90-Million-Year-Old Fossil in the Missouri River

The entire, intact, specimen that is currently being studied was caught in the Indian Ocean in 1960. It was donated to the Zoological Museum in Copenhagen, where it has been displayed whole rather than dissected. Other samples have been cut up for research, but scientists still know relatively little about these creatures, which can grow to more than 6 feet long and weigh over 200 pounds.