Video: Watch Hundreds of Blackbirds Plummet into the Ground in Mexico 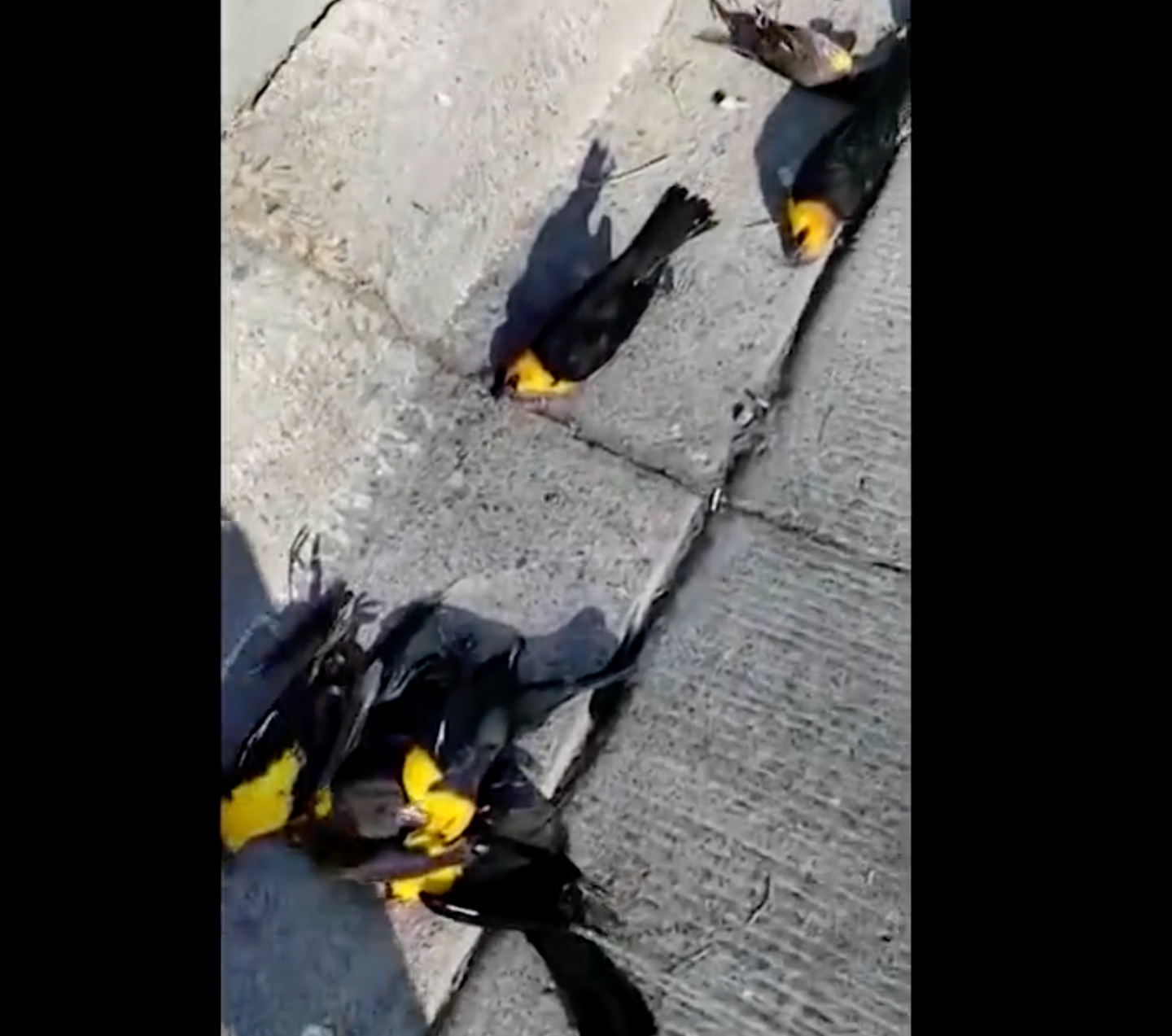 The blackbirds most likely collided into the ground while trying to evade a predator. Reuters via Twitter
SHARE

In the Mexican city of Cuauhtémoc, a large flock of yellow-headed blackbirds was seen crashing to the ground, leaving hundreds of dead birds on the street. The graphic scene, which took place on February 7, was captured by a surveillance camera in a shocking video that has gone viral on social media. In one swift motion, a black cloud of the birds appears to plunge downward, smashing into the asphalt. A second later, many of the surviving birds fly away, but many others lie scattered on the ground. See it for yourself below.

Predictably, the video led to a host of far-fetched explanations from online commenters. Some folks suggested that air pollution was the catalyst, some blamed climate change, and others pointed to the so-called destructive forces of “5G technology.” The most likely explanation of the birds’ strange behavior, however, was likely far simpler.

“Murmuration,” also called “flocking,” is the phenomenon exhibited when birds move in massive, densely grouped formations, executing impressive acrobatics while foraging airborne insects or escaping marauding predators such as falcons, hawks, eagles, and other raptors. While the occurrence is most often observed among starlings, other species can employ the tactic when necessary for survival. In the case of the recent video, ornithologist Kevin J. McGowan told the Washington Post that “this was truly an ‘oops’ moment for the birds. A really big ‘oops’ moment.” Flushed by a predator, the yellow-headed blackbirds likely reacted quickly and misjudged their elevation—striking the earth by mistake.

Ornithologist Ronald L. Mumme echoed McGowan’s sentiment in an interview with Newsweek. Mumme sought to dispel rumors that pollutants caused the birds to drop from the sky. “During evasive maneuvers, the flock members dove, became disoriented, and many crashed to the ground and injured themselves,” he said. “I don’t think any birds were having problems until they collided with the ground or buildings.”

Read Next: Dozens of Geese and Pelicans Mysteriously Found Dead in Iowa

Yellow-headed blackbirds spend their breeding season in a large swath of the Western United States and Canada before migrating to their wintering grounds in northern Mexico by the thousands each year. Sightings of flocks of the size shown in the recent video are not rare. Characterized by their vibrant yellow markings and raspy vocalizations, the species is extremely common. Experts say that the recent incident should not prompt concern for the conservation of the species. While Audubon’s Guide to North American Birds reports that yellow-headed blackbird populations have suffered some declines from habitat loss in recent years, the species remains widespread throughout North America.