The Good, Bad, and Ugly Side of Michigan Grayling

The state is closer than ever to reintroducing this long-lost native species. But many anglers aren’t happy about it 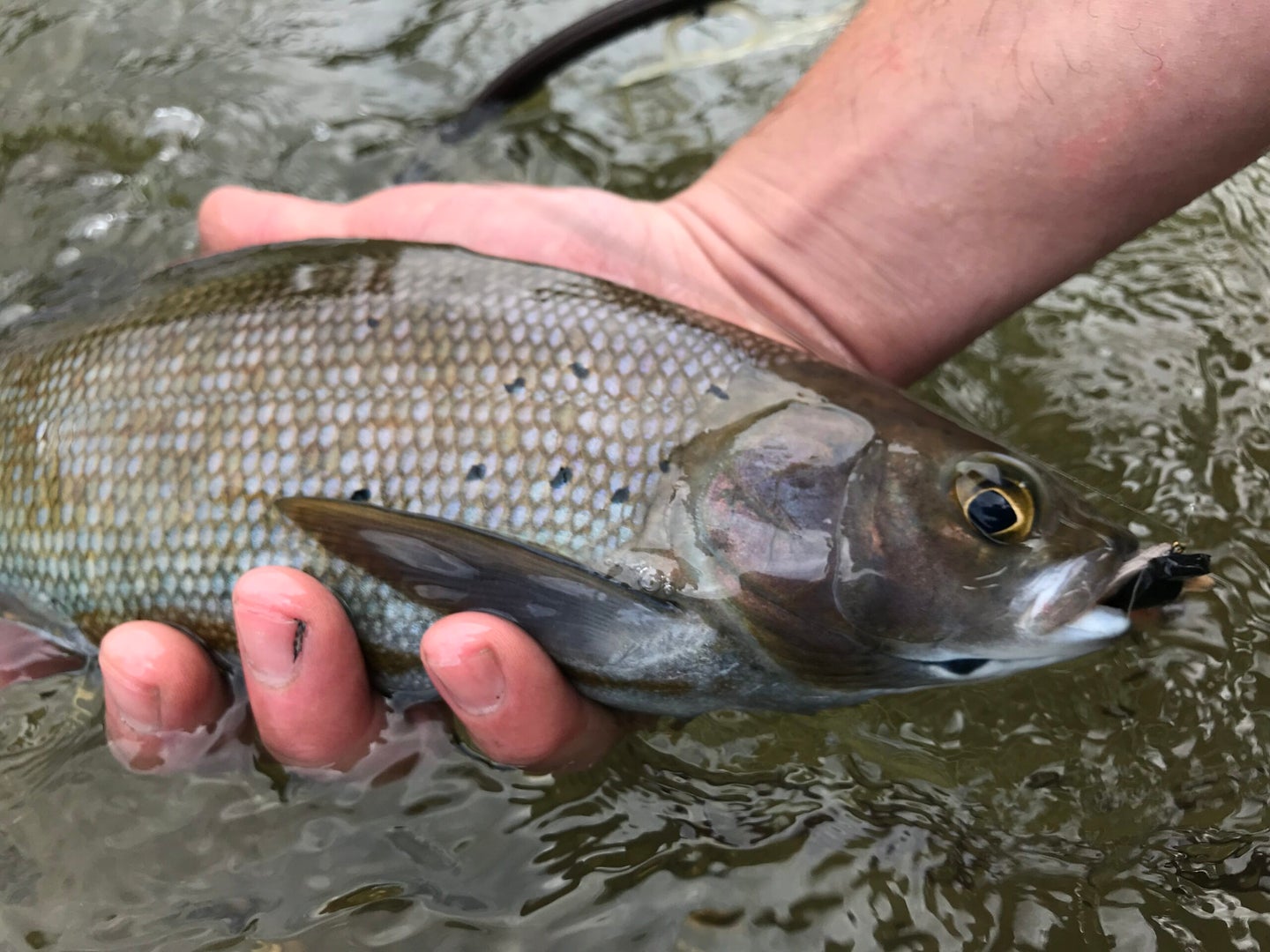 A grayling season in Michigan could soon be an option for Lower 48 anglers. Joe Cermele
SHARE

As sport fish go, grayling are kind of oddballs. Most of us don’t live where they do, which gives these fish an exotic appeal. Growing up, I was enamored with them, often gawking at beautiful images of those huge iridescent dorsal fins lit up with pink, purple, and aqua hues. During my first visit to Alaska in 2007, I couldn’t wait to catch one. I found out quickly that sticking them wasn’t difficult. They’ll eat just about any dry, nymph, or small streamer you want to throw. They also put a hell of a bend in the 5-weight fly rod. I also learned that grayling are so prolific in the far north, they hold very little appeal to the locals. With so many other players like salmon and trophies rainbows in Alaska, not many folks are booking trips to the tundra just for grayling, either.

But would grayling appeal to more anglers if they were more accessible in the Lower 48? Thanks to recent developments at a fish hatchery in Michigan, we may find out in the near future.

A New Plan for Stocking Grayling in Michigan

What many people don’t know is that grayling once flourished in the continental U.S. They were native to Montana and Michigan. But grayling are a delicate species with low tolerances for environmental change. To thrive, they need clear, ice-cold water loaded with bug life, and the freedom to roam for miles during seasonal migrations—which isn’t easy with dams in the way. In 2014, Montana’s grayling were taken off the endangered species list, though even after years of conservation efforts to get that status change, they still exist in only 4 percent of their historical range. The biggest culprit in the demise of Montana’s grayling was the stocking of trout, which started in the late 1800s. Michigan’s native grayling, which are presently extinct, felt the sting of introduced trout as well, though logging and overfishing in the 1930s put the final nails in their coffin. For decades, biologists in Michigan have been trying to figure out how to bring them back from the dead, and after several failed attempts, they may be closer than ever before.

According to this story on Bridgemi.com, past efforts to reintroduce grayling leaned on basic stocking methods used for trout. The fish were reared in hatcheries and transplanted into rivers as young fish. Today, scientists have a better understanding of grayling, and realized that past stockings had introduced the fish to Michigan waters too late. Grayling need to imprint on their birth stream so they can return to it to reproduce. If the fish is too old when it’s planted, it won’t develop that instinctual memory. These early-stocking attempts yielded no reproduction, and most of the fish that survived fell victim to the trout now synonymous with Upper Michigan angling even though they’re ultimately intruders. This time, Michigan is adopting a technique from the playbook of the other Lower 48 state with grayling woes.

According to the story: “Michigan’s new effort borrows a technique from Montana, where species managers successfully introduced grayling by piping water into stream-side buckets containing fertilized eggs. When the eggs hatch, they spill out of the bucket and into the stream, and they’re immediately imprinted.”

Biologists in Michigan are hopeful this technique will work, but reintroducing the grayling is only one part of the battle. The other is the contradictory politics that comes along with it.

But Is Reintroducing Grayling a Good Idea?

Across the country, anglers love to latch onto to crusades against invasive species. There is concern about how snakeheads are affecting bass populations. There is worry about how Asian carp are ruining entire rivers. In some parts of the U.S., smallmouths are threatening native trout. Yet here in Michigan, massive efforts are being made to reintroduce a native species—to right wrongs of the past—and they’re being met with pushback.

The biggest issue facing Michigan biologists is where to put the grayling, because many of the small headwaters where they historically thrived were clear cut. Removing tree removes shade and bug life and raises the temperature of the water. The Upper Manistee, Boardman, Jordan, Maple, and Au Sable Rivers are all being considered for the reintroduction, but for the plan to work anglers have to be onboard, and many are not.

From the story: “The board of Upper Black River Council—a conservation group—signaled in 2017 it wants no part in the grayling reintroduction, fearing the fish could compete with the far northeast Lower Peninsula river’s brook trout.

“And the Michigan United Conservation Clubs, Michigan’s largest statewide conservation group with more than 40,000 members, passed a resolution in 2018 expressing a host of concerns about grayling reintroduction.

“The group worries a focus on grayling could divert attention from other fish conservation priorities, with no guarantee it will succeed. And if the effort does succeed, said Nick Green, the group’s communications director, MUCC is concerned that sportfishers could one day be asked to adjust their habits to protect fragile grayling populations, such as by limiting fishing in areas where grayling are present.”

A line is being drawn in the sand, as concerned groups want the state to decide what’s more important: saving grayling or stream access and economic benefits of recreational trout fishermen.

Some of the antis’ arguments are valid—mainly that climate change is already altering fisheries in Michigan, so work should be done to maintain and preserve what’s already there before trying to bring back an extinct species. The team from the hatchery thinks the sweet spot is the Boardman River, where recent dam removals have lowered water temperature. The hope is that this chill will help thin out the brown trout population (which is already smaller than in other area streams). Likewise, the upper river sees few salmon and steelhead, and, therefore, less angling pressure.

If successful, it would take years for the grayling to reach maturity and hopefully spawn on their own. Personally, I would jump at the chance to target grayling in Michigan someday—although the point of the reintroduction is less about angling and more restoring the roots of a watershed. But if there’s one thing the Michigan grayling saga proves, it’s that whether you’re trying to get anglers to see some benefit in an invasive species or trying to get them excited about bringing back a native species, you just can’t win.