In this edition of The Rewind, a grizzly bear biologist breaks down an epic 2020 video of a grizzly bear hunting a bison in Yellowstone National Park 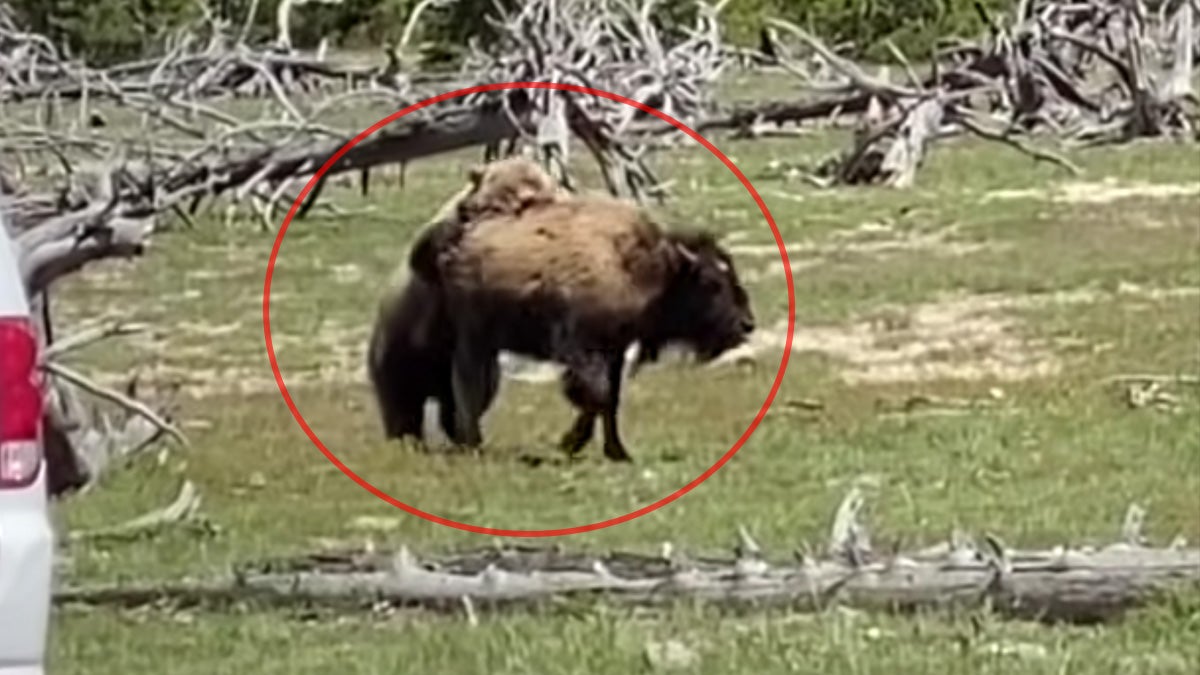 A grizzly bear and a bison faced off near a popular Yellowstone National Park trail in May 2020—and a local family was there to record the epic showdown. Michael Daus posted the video on YouTube. The action occurred at the Grand Prismatic Geyser trailhead.

The video begins with a small bison fending off a lunge from a grizzly, which scrambles to retreat as the bison counterattacks. But the bear soon manages to turn the tables, latching onto the bison’s hindquarters and biting repeatedly at its back in an attempt to sever its spine. But the bison refuses to go down. As the grizzly totters along on its hind legs and tears repeatedly at the ungulate’s hide, the bison walks past a parking lot dotted with cars, crosses a bridge, and plunges into a shallow stream in a futile attempt to get the bear off its back. After a prolonged struggle that includes the pair being swept downstream, the grizzly is finally able to subdue its prey and begin feeding.

A Grizzly Bear Expert Breaks Down the Incident

“We don’t know for sure, but this very well may be this bear’s first attack on a bison,” says Kerry Gunther, bear management biologist at Yellowstone National Park for the past 40 years. The bear is a sub-adult grizzly, likely 2 to 4 years old. “Being young and on its own, it’s probably pretty inexperienced. As a cub or yearling, it would have watched its mother kill bison but probably didn’t participate in the attacks.”

Biting the spine to paralyze prey is how grizzlies typically kill ungulates, Gunther notes. “The bear is going after the right spot, but bison have really thick hides and the bear seems to have trouble getting through it,” he says. “Maybe the jaw strength is not quite there yet, and so it takes longer than average for taking down a small bison like that.”

The bison, judging by its body size and slender horns, is likely a yearling female, and it’s highly unusual that bison of its age and gender is alone. A yearling female typically would be in a mixed herd with adult cows, other yearlings, calves of the year, and a few younger bulls. “When a bear approaches, the older bison will form a line with their heads and horns toward the bear, and the calves and yearlings get behind the adults,” Gunther explains. “That group defense is pretty formidable even to an adult bear with lots of experience killing calves. For whatever reason, this yearling is on its own. Whether it was sick and couldn’t keep up with the herd, we just don’t know.”

Even without help, the 500-pound bison has a fighting chance against the 200- to 240-pound grizzly. “It does a good job in the beginning,” says Gunther. “It’s standing its ground and trying to run the bear off, which is a pretty successful strategy for most large ungulates. Bison, moose, and elk—if they stand their ground and fight back—can usually run a bear off.”

In fact, Bison, in particular, are adept at repelling grizzly attacks. Gunther says he once found the carcass of a 500-pound male grizzly with a puncture apparently caused by a bison horn. “So there’s some risk to the bears, especially if they’re trying to take on an adult bison,” he says. “I’ve seen multiple cases where small groups of bison have been able to run bears off. And often you’ll see big bulls lying in a meadow, and they might not even get up if a grizzly walks by, they’re so confident in their ability [to protect themselves].”

The five-minute YouTube video was edited down from 17 minutes of action. Gunther says the attack probably began well before the camera started rolling. Injuries to the bison’s back are evident at the start, and the animal is already panting heavily. “You can see the bison is already getting tired,” Gunther says. “It becomes a fight of endurance, and the bison tires before the bear does.”

Read Next: Watch a Pack of Wolves Kill a Bull Elk in Brutally Slow Fashion

While the video ends with the grizzly feeding on the still-struggling bison, the drama likely continued beyond the final frame. “With a young bear like that, there’s a good chance a bigger bear came and usurped that carcass,” Gunther says. “Bears have a really good sense of smell, and they can smell a carcass from a couple of miles away.”

That it all unfolded in a well-traveled tourist spot—not in the remote backcountry—is part of what makes the encounter unique. “That doesn’t happen very often,” Gunther says. “But that’s Yellowstone National Park for you. It’s like the Disney Channel live—a place where you can see nature up close and personal.”