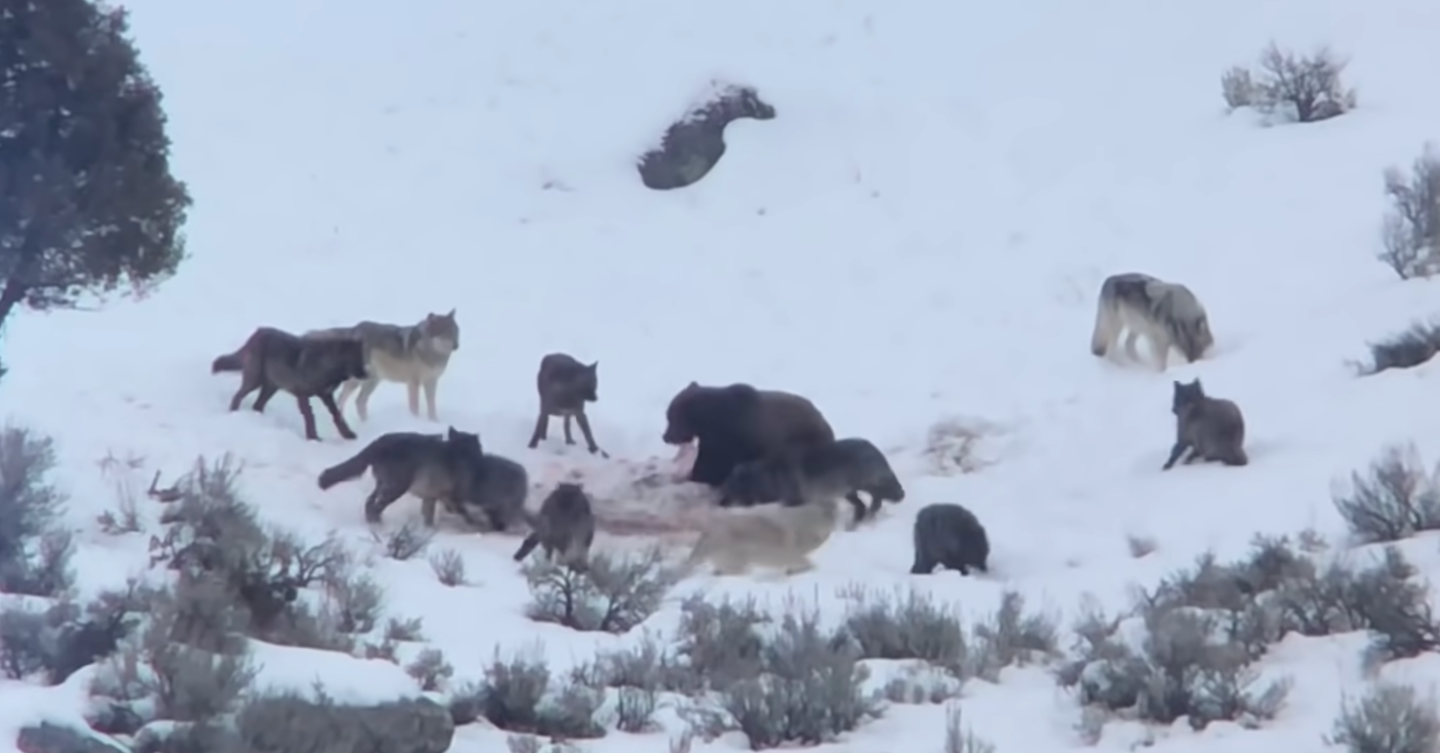 One of the most-watched wolf packs in the world went head to head with an aggressive grizzly bear in Yellowstone National Park in late December 2019. The famed Junction Butte wolf pack struggled to defend an elk carcass from the bruin while Daniel Bradford of BrushBuck Wildlife Tours recorded footage of the encounter from the park’s northeast entrance.

The video depicts an iconic scene that conjures up a dusty old oil painting hung in a Western bar. The roaring grizzly bares its teeth as it is surrounded by at least twelve wolves that relentlessly circle the elk carcass. When one of the wolves makes a bold move to reclaim what’s left of the elk, the big bruin lunges forward and swipes at the canine with one of its massive front paws. Meanwhile, the main beam and two forked tines of the elk can be seen protruding from the snow as magpies and ravens swoop in and out of the frame looking for discarded scraps. See it for yourself below.

“Grizzlies are really good at scavenging and usurping kills,” says wolf expert and Wyoming Game and Fish Department Large Carnivore Supervisor Dan Thompson. “We see a lot of it with hunter harvest. They sometimes take up a carcass before a hunter gets to it.”

In the type of scenario described by Thompson, most human hunters are going to leave the elk to the usurping grizzly. But wolves aren’t so quick to walk away. In fact, a recent study conducted in Yellowstone over the course of several seasons found that the presence of a grizzly bear at a wolf pack’s kill site tends to increase the amount of time that the wolves will ultimately spend there.

According to the study, wolves spent up to six extra hours at carcasses when grizzly bears were scavenging their kills. This type of “interference competition” among apex predators can alter their top-down impacts on entire ecosystems. When a wolf pack spends more time fending off a kill from a scavenging grizzly, for example, they spend less time hunting and killing other members of the area’s ungulate herds.

The study’s authors went on to say that the more evenly matched the competing predators are, the longer they’ll interact at the site of a kill. “While brown bears are often able to dominate carcasses, the outcome of interactions between wolves and bears varies based on the demographics and number of wolves involved,” the authors explain. “Our results suggest that interactions at kill sites between more closely matched competitors are protracted rather than cut short, probably because the potential for reward is greater.”

The Battle Took Place During An Unlikely Part of the Year

The wolves vs. grizzly standoff recorded by Bradford took place in December. According to Thompson, just witnessing an active grizzly bear that deep into a Yellowstone winter is a rare occurrence. “It’s very late in the year,” he says. “We do have some of those boars that’ll stay out and try to find food later, but for the most part, the strong majority of bears have been asleep for at least a month already.”

Wintertime grizzly bear activity may be indicative of a broader trend emerging on the Wyoming landscape. “We’re seeing more bear activity later and earlier,” he says. “If there’s a food source, they’ll stay out and about. They evolved to go to sleep for part of the year because there was less food available.”

As Wyoming’s wolf and grizzly numbers continue to increase, Thompson and his colleagues are seeing changes in the way all big predators behave and interact, not just wolves and grizzlies. “We have increasing carnivore populations, and we’re starting to see things shift, perhaps back toward how they were historically,” he says. “We have areas where wolves have moved in and now there are fewer mountain lions. We see a lot of dynamics between black bears and grizzly bears where black bears are shifting to different daily activity patterns, where they’re more active during the day than at night. It’s interesting to watch.”

As for the outcome of this particular conflict, the wolves eventually moved on, leaving the big bear alone with their kill.