New Study Sheds Light on How Deer Cope with Wildfires 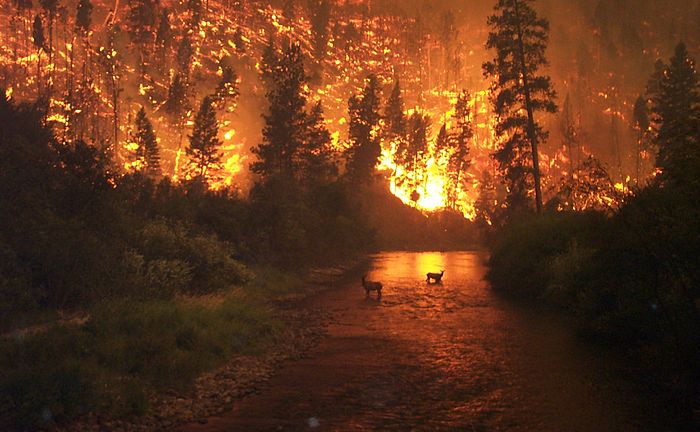 This photo taken by John McColgan during a Montana wildfire begs the question of how wildlife deal when fire ravages their habitat. BLM photo
SHARE

Perhaps the most famous photo ever taken as a wildfire raged is the one shown above, captured by John McColgan during a 2000 conflagration in the Montana wilderness. McColgan was working at the fire under a cooperative agreement with the Bureau of Land Management when he took the photo of two elk standing in a river as flames raged around them.

How varying species of wildlife cope with large wildfires is something researchers have studied extensively since that image brought the issue to the minds of millions of people around the globe.

A study reported in the journal Ecology and Evolution in late October reveals insights into how blacktail deer responded following the catastrophic 2018 Mendocino Complex Fire in California. Somewhat surprisingly, the deer demonstrated a powerful loyalty to their small home ranges, returning soon after the fire and living on the scorched ground, even though high-quality, unburned habitat was available about a mile away.

The research, led by Samantha E.S. Kreling and Kaitlyn M. Gaynor, involved 18 radio-collared deer at the University of California’s 5,358-acre Hopland Research and Extension Center. The center is the principal field research facility for agriculture and natural resources in the state’s North Coast region.

The Mendocino Complex Fire burned some 450,000 acres in northern California, including half of the acreage at HREC. The deer had been collared and monitored with a network of 36 cameras for other research purposes, but the fire offered a unique opportunity to record their movements and feeding patterns before, during, and after the fire. Of the 18 collared deer, 13 had home ranges within the burn perimeter. This let researchers better compare deer movement in burned and unburned areas.

Kreling, a PhD student at the University of Washington, told The Wildlife Society that “We obviously weren’t predicting the wildfire to sweep through…. [M]y mentors were supportive of me taking on the project, so I began pivoting toward this.”

The findings contradicted earlier predictions—and the expectations of the researchers—that ungulates, such as deer, and other large mammals living in California’s shrublands would flee the burn areas and remain in untouched habitat until their home range returned to a semblance of normalcy with some vegetative regrowth.

All collared deer in the study survived, with most returning to home ranges quickly, some in just a few hours. Only one deer, one that traveled four kilometers fleeing the fire, took a couple of days, Kreling said.

As might be expected, the fire left the deer in tough shape, requiring them to use more energy to find food. Using camera images, researchers categorized the animals’ physical conditions on a 0-5 condition scale before and after the fire. Before the fire, most deer were rated between 2 and 3. After the fire, some deer—predominantly in the burned area—scored 0, implying a very low level of body fat. Still, they managed to survive, although it remains unknown how the bodily strain might affect reproductive success in the next couple years.

Upon returning to their fire-depleted homes, the deer gravitated to patches of surviving vegetation and woodland habitat, areas providing some forage and cover. They avoided shrubby areas that had largely burned.

One interesting nugget of behavioral insight is that, both before and after the fire, deer preferred living in areas away from dry streambeds. The thinking is such drainages facilitate predator movement and deer may have learned to naturally avoid them.

There is no denying that catastrophic wildfires scar the landscapes where the high-intensity infernos rage. Complete recovery can take decades. Many animals have learned how to deal with the naturally occurring low-intensity fires that have been on the North American landscape for millennia. These fires often promote healthy regeneration and humans have learned to intentionally “disturb” the landscape, replicating habitat-beneficial fires via prescribed burns.

Still, there are wildlife winners and losers whenever fire rages. The challenge is learning how wildlife might adapt, if at all, to catastrophic megafires that produce damage that can take decades to overcome.