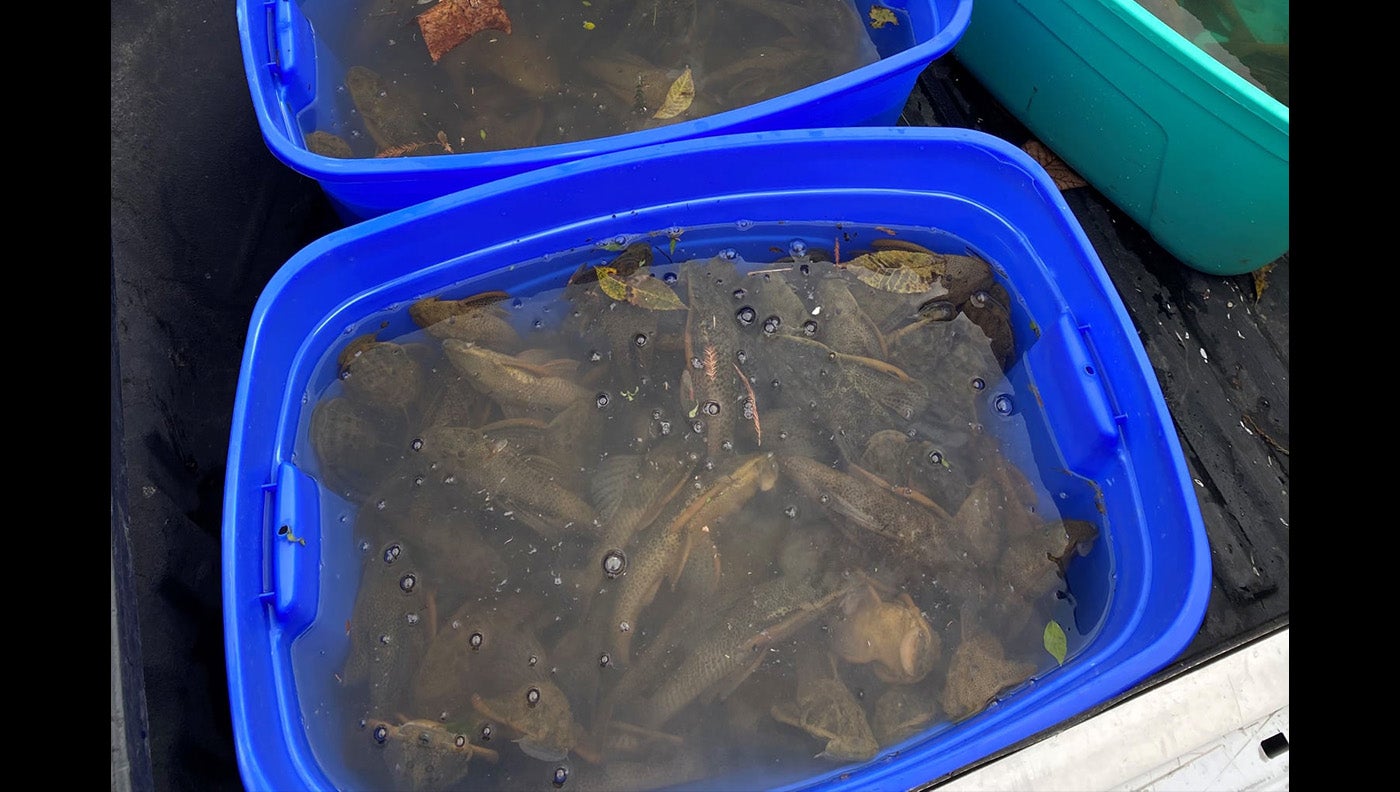 Armored catfish can survive for up to 20 hours without water. Texas Parks and Wildlife via Facebook
SHARE

Researchers from Texas A&M and Texas State University recently removed more than 400 suckermouth armored catfish from the San Marcos River, according to Texas Parks and Wildlife. The agency attributes the presence of the destructive invasive species to aquarium owners illegally dumping their pets in public waters. The fish were removed during a “dewatering event” at Rio Vista Park. The information recorded by the researchers will help state fisheries managers learn more about how to best control the species.

Armored catfish are members of the Loricariid family and are known in the aquarium trade as the “common plecos.” Native to Central America, the species is valued by aquarium keepers for their ability to keep tank walls free of algae. When released in the wild, however, these fish can grow up to three feet long, and their destructive behavior contributes to the erosion of stream banks as the fish are known to be cavity nesters and dig deep burrows that can cause banks to collapse.

Their armored exterior and spiny fins, lack of natural predators in North America, and ability to quickly reproduce (females lay 300 eggs at a time that males guard for up to three weeks) make these freshwater fish extremely difficult to eradicate. “In addition to their successful breeding strategies, Loricariids are hearty fish that can withstand a wide range of ecological conditions,” explains the Texas Invasive Species Institute. “In fact due to their large vascular stomach, the fish can gulp air and survive out of water for more than 20 hours.” Noah Bressman, a researcher at Salisbury University in Maryland, even told the Fort Worth Star-Telegram that some species of armored catfish can even use their spiny fins to walk on land at speeds of 2.3 miles per hour.

Suckermouth armored catfish were first discovered in the headwaters of the San Antonio River in 1962 and are thought to be well established in Texas. They can be found in the San Antonio River, Comal Springs, San Felipe Creek, and the Brays and Buffalo Bayous in Harris County. Outside of Texas, they are known to be established in Nevada, Wisconsin, and Florida, where they’re known to swarm manatees to eat the algae off their backs.

Though fisheries managers are working to limit the ecological impacts of established armored catfish populations, they emphasize that it’s important to try to keep them out of public waterways in the first place. The agency urges Texans to learn responsible ways to get rid of unwanted aquarium life at a Texas Invasive Species Institute webpage called “Never Dump Your Tank.”