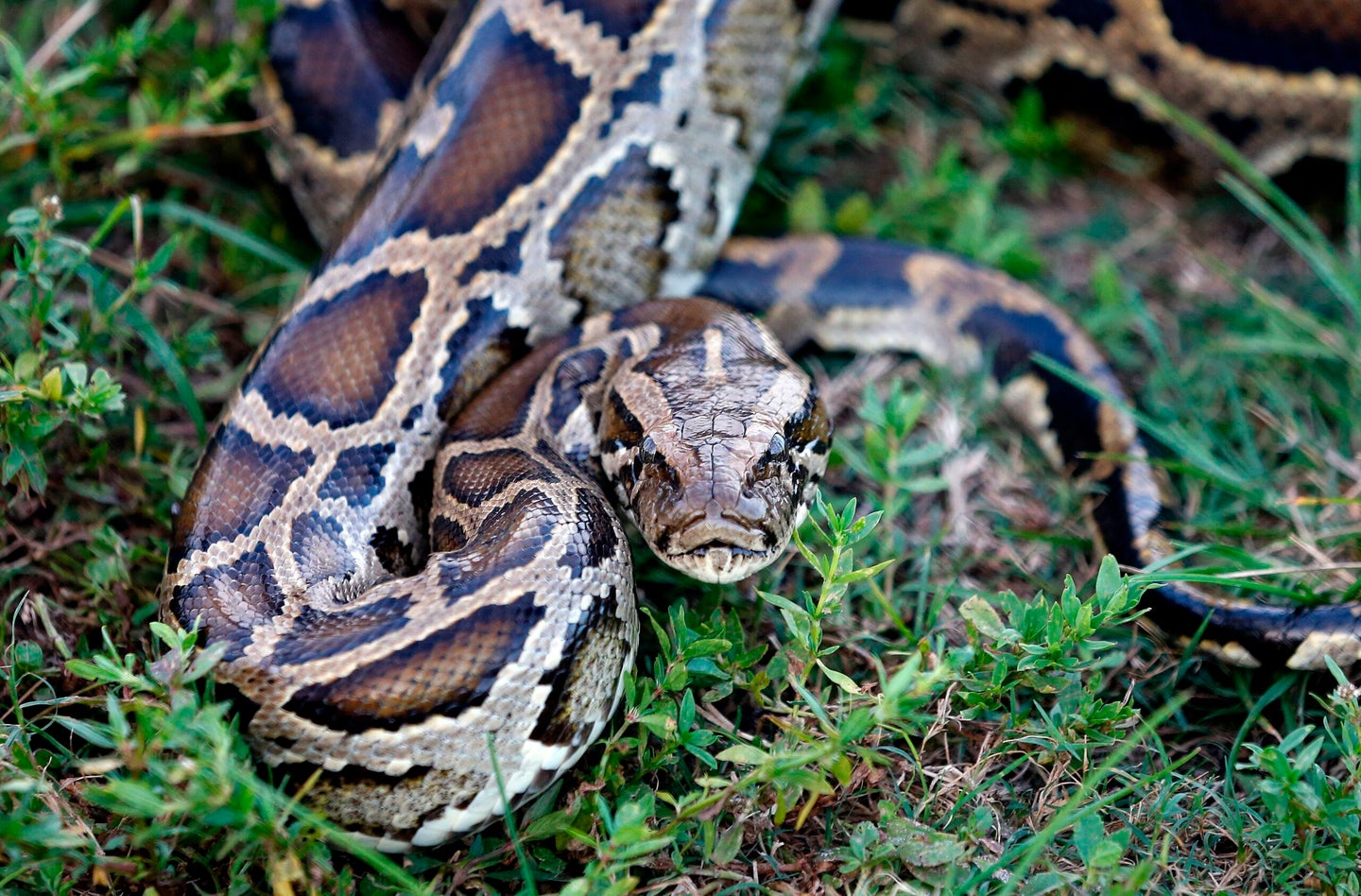 The Burmese python does not have any natural predators in Florida. Rhona Wise/AFP via Getty Images
SHARE

It was only a matter of time. What was considered the last stronghold of the northern Everglades—the Arthur R. Marshall Loxahatchee National Wildlife Refuge—has been invaded by Burmese pythons, a highly destructive non-native species that has plagued South Florida for decades.

“We have finally, unhappily, sighted a Burmese python in the interior of the refuge,” University of Florida wildlife professor Frank Mazzotti told the Palm Beach Post. Biologists had already suspected the snake was living in the refuge after its DNA was detected in the preserve’s freshwater streams. In late October 2021, their fears were confirmed when invasive plant control contractors for the South Florida Water Management District spotted a python. The agency notes that there have also been two other unverified but “credible” sightings at the refuge.

Mike Kirkland, an invasive animal biologist with the water management district, explained that the sightings are “an indication that the population is expanding…The fact that we’ve had a few sightings recently leads me to believe there are more there.”

Responding to the invasive reptiles in the refuge will be a struggle, as it contains 144,000 acres of swampy land that’s largely inaccessible by foot or vehicle. Burmese pythons were first brought to Florida as exotic pets. They gained a foothold in the Everglades after escaping or being set free by their owners. Their rapid is also connected to 1992’s Hurricane Andrew, which destroyed a Burmese python breeding facility, releasing hundreds of individuals into the wild.

Since then, the snakes have caused staggering declines in the area’s mammal populations. In the southernmost part of the Everglades, where Burmese pythons have been established the longest, populations of raccoons and possums have fallen by 99 percent and bobcat numbers have fallen by 88 percent. Marsh rabbits, cottontail rabbits, and foxes have effectively disappeared. The United States Geological Survey calls Burmese pythons, “one of the most concerning invasive species in Everglades National Park.”

The South Florida Water Management District has already established a python bounty hunting program in the Lox Refuge that is among the highest paying in the state. Contractors willing to patrol the refuge can earn 15 dollars an hour compared to the 10 dollar rate in other parts of South Florida. Hunters are also given 50 dollars for each python measuring four feet or longer and an extra 25 dollars for each foot after that. “We don’t expect them to capture a lot of pythons because the populations are very low in the refuge compared to other project areas,” Kirkland told the Palm Beach Post. “We want to keep it that way.”