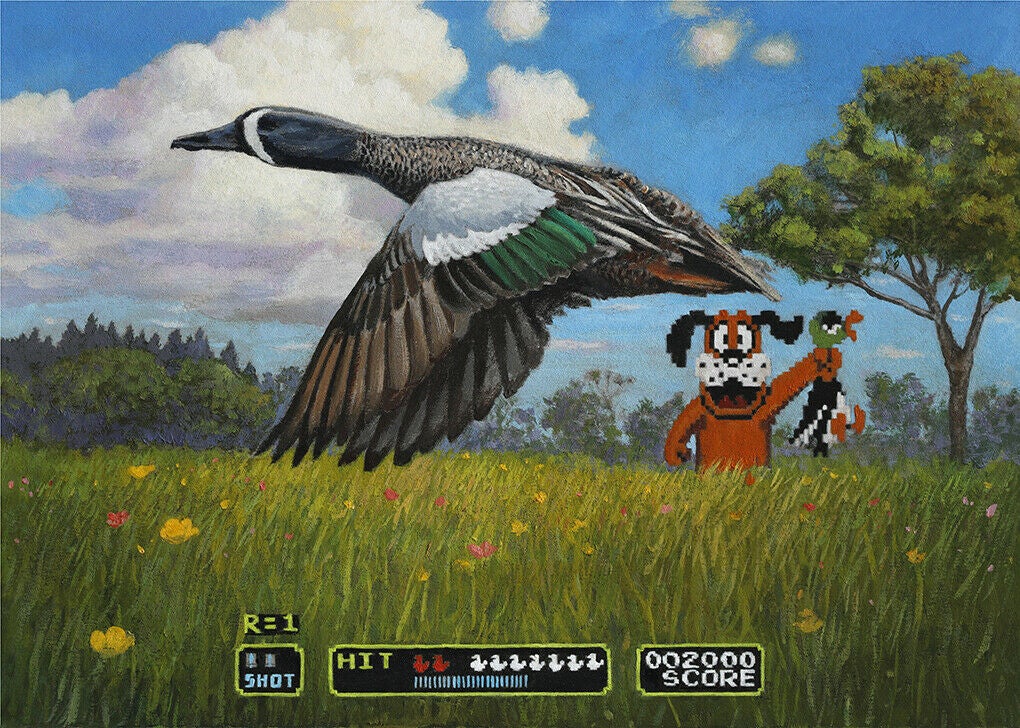 This masterpiece will soon hang in the Field & Stream office. Artwork by Eric Joyner
SHARE

How’s this for an odd duck-stamp story: Last month, folks on social media noticed some unusual entries into the Federal Duck Stamp Contest. It got odder yet, when, on the September 26th episode of “Last Week Tonight with John Oliver,” the host—that would be John Oliver— started talking about, of all things, duck stamps and revealed that his show had commissioned the satirical stamps. When none of them won the contest, he announced that he was going to put them up for auction on eBay, promising to donate all of the proceeds to wetlands conservation through the U.S. Fish & Wildlife Duck Stamp program.

Pretty great, right? What at first seemed like another trolling stunt from anti-hunters turned out to be a wink-and-a-smile strategy to raise money for conservation.

But here is where the story goes from odd to amazing: The folks who own Field & Stream decided to get in on the bidding game for Oliver’s duck stamps, and apparently they had no intention of losing. Because as of October 1, 2021, Field & Stream—the magazine brand that came up with the very idea of the duck stamp—are the proud owners of one of John Oliver’s rejected duck stamps. The winning bid? A modest $33,200.

And here I thought I was doing my part by purchasing two duck stamps each year.

A Quick History of Field & Stream and the Duck Stamp

Let’s go back to 1924, when Ray P. Holland took over as the new editor of Field & Stream. Among his many qualifications for the job, Holland was a migratory-bird badass. According to a history of F&S published in the March 1995 issue:

Among conservationists, Holland achieved near-legendary status for his efforts to enforce the Migratory Bird Treaty Act. Approved by Congress in 1916, the treaty between the U.S., Canada, and Mexico established federal control over the shooting of ducks and other migratory birds. (Field & Stream had championed the treaty as part of its long campaign for uniform game laws and an end to spring shooting, particularly by market gunners, whose unregulated killing had decimated waterfowl populations.) While working as a federal game warden, Holland had arrested Missouri’s attorney general for shooting ducks out of season, in flagrant violation of the act. Holland had then gone on to fight a two-year battle culminating in a decision by the U.S. Supreme Court upholding the act’s constitutionality.

Told you he was a badass. But his vision, and mission, as a conservationist only got more inspiring:

Holland kept Field & Stream in the forefront of conservation. In his first year in the saddle, he established the Field & Stream Conservation Council, a ten-member board devoted to creating a national waterfowl refuge system that hunters would fund through the purchase of “duck stamps” along with their state hunting licenses, an innovative concept which would make the refuges “self-supporting” and independent of Congressional aspirations.… In 1934, following years of efforts by Field & Stream and sportsmen’s groups, Congress at last established a national system of wildlife refuges funded by duck stamps.

Since the Migratory Bird Hunting Stamp Act, known as the Duck Stamp Act, was passed in 1934, the numbers speak for themselves:

That brings us to the latest chapter in Field & Stream‘s history with the duck stamp—as the owners of a $33,200 contest reject. So, why’d we buy it? The short answer is this: While our owners might not have the authority to arrest a poaching attorney general like Ray Holland did, they do share his passion to make a difference as conservationists. As for the official answer? I’ll pass the mic to them:

“Recurrent commits funds every year for nature-based solutions to climate change because conservation and sustainability are vital to our company’s mission,” said North Equity Managing Partner, Matt Sechrest. “This was a unique opportunity for us to support conservation while honoring Field & Stream and Ray Holland. We’re really proud of all the Duck Stamp program has accomplished over the years—thanks in large part to Field & Stream and Outdoor Life readers and writers—and hope this renewed enthusiasm will help the program continue to thrive for years to come.”

What he forgot to mention is how excited we are to hang this masterpiece in the Field & Stream office. It’s really gonna tie the place together.

Back to John Oliver’s Duck Stamps

When I first watched the duck stamp segment on “Last Week Tonight,” I kept asking myself: OK, but when is he going to make fun of duck hunting or duck stamps? And, aside from some objectively funny anecdotes about two rival duck stamp artists (yes, that’s a real beef), he never really did. The whole bit was almost…wholesome. Oliver simply talked about how awesome the Duck Stamp Contest is and how beautiful the winning artwork in the contest always is and how perfectly effective this simply perfect conservation concept is. After all, when five stamps that the Duck Stamp Contest judges rejected quicker than a portrait of an American coot can raise nearly $100,000, you know you’ve found something that works. Even our friends at Ducks Unlimited thought so.

“We’ve seen some interesting approaches to raising funds for wetlands and waterfowl conservation, but this effort by John Oliver had us all smiling,” DU Chief Operating Officer Nick Wiley told Field & Stream. “We’re thrilled that so much money was raised in a short amount of time to support a critical conservation program. These funds are much needed and will be put to great use by the U.S. Fish and Wildlife Service and their partners. The Federal Duck Stamp program is one of the great ways people can support conservation. Since its inception in 1934, the program has raised more than $1 billion to help acquire and protect more than six million acres of habitat in the National Wildlife Refuge System.”

And in case you’re wondering, the actual winner of this year’s Duck Stamp Contest was James Hautman, whose gorgeous portrait of a pair of redheads is his sixth winning painting in the contest. I look forward to purchasing his stamp next summer. But, just for fun, I think I’ll also print a copy of our “Duck Hunt” duck stamp and keep it in my blind bag throughout the waterfowl season. That might sound odd, but I’m proud to have it.