100,000 Lahontan Cutthroat Trout Are Being Stocked Into Lake Tahoe 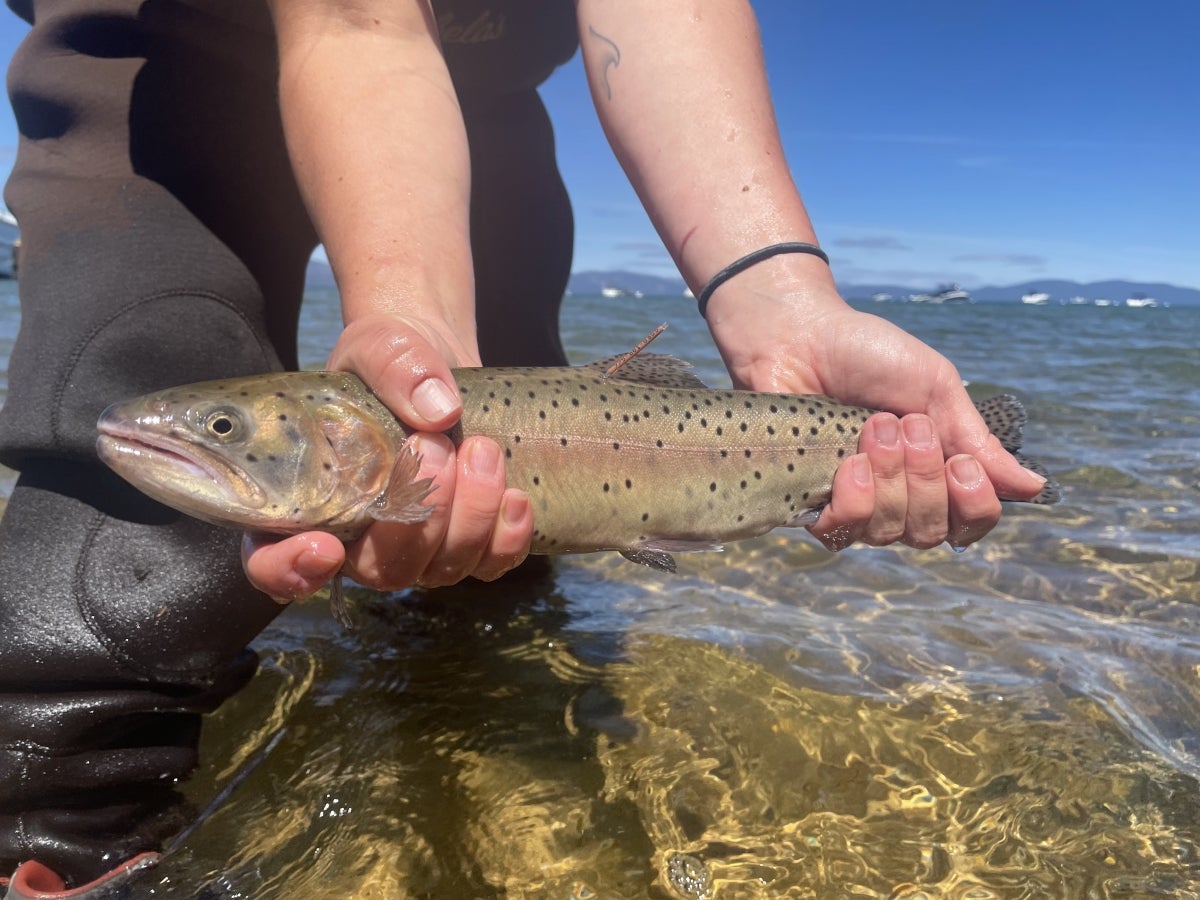 Twenty percent of the trout being stocked are tagged. USFWS
SHARE

An ambitious conservation project by federal, state, regional, and tribal organizations seeks to recover the world’s largest cutthroat trout species to Lake Tahoe. The coalition of agencies has begun stocking the first of 100,000 catchable-size Lahontan cutthroats that will be added to the lake this summer.

The Lahontan National Fish Hatchery Complex in Gardnerville, Nevada, started releasing the fish on June 1 and will continue stocking throughout the summer as conditions allow, according to a press release from the U.S. Fish and Wildlife Service (USFWS). The trout vary in size from 8 to 13 inches and will be stocked at publicly accessible locations in both the Nevada and California sides of the lake.

Lahontan cutthroat trout are the only trout species native to the Tahoe Basin. They have long been prized by the Washoe and other Native tribes for their nutritional and spiritual value. According to the Western Native Trout Initiative, more than 370,000 surface acres of lakes and 7,400 miles of stream habitat were once occupied or had the potential to be occupied by Lahontan cutthroats in 1800. European settlement, which led to overfishing, mining, timber harvest, pollution, water diversions, the construction of dams, and introduction of non-native trout devastated the species. Thought to be extinct by the 1930s, they were rediscovered in the 1970s and have been listed as threatened under the Endangered Species act since 1975.

Lahontans have been the focus of multiple restoration projects, including a $34-million fish bypass system installed in 2021 that allows the fish to get around the Derby Dam and again use the Truckee River to move between Lake Tahoe and Pyramid Lake. Pyramid Lake is home to the same Pilot Peak strain of Lahontan cutthroat that is being introduced to Tahoe. Pyramid Lake has become a bucket-list destination for trout anglers from around the world drawn by the opportunity to catch a giant Lahontan, which can reach weights of over 40 pounds.

Lahontan trout have been stocked in Lake Tahoe intermittently since 2011, but never in such large numbers as this year. “While this summer’s stocking may inform future restoration efforts, it is an initiative to expand recreational trout fishing opportunities for the public, enhance the near-shore fishery, and to foster an appreciation for this iconic native species,” explained the USFWS.

About 20 percent of the stocked fish will be tagged. Anglers who catch a tagged fish are encouraged to report their catch by calling (775) 861-6355. Those reports will help biologists evaluate the success of the stocking effort along with the fish’s survival, distribution, and growth rates. Partners in the multiagency and tribal cooperative effort include the USFWS, California Department of Fish and Wildlife, Nevada Department of Wildlife, USDA Forest Service Lake Tahoe Basin Management Unit, Tahoe Regional Planning Agency, and Washoe Tribe.