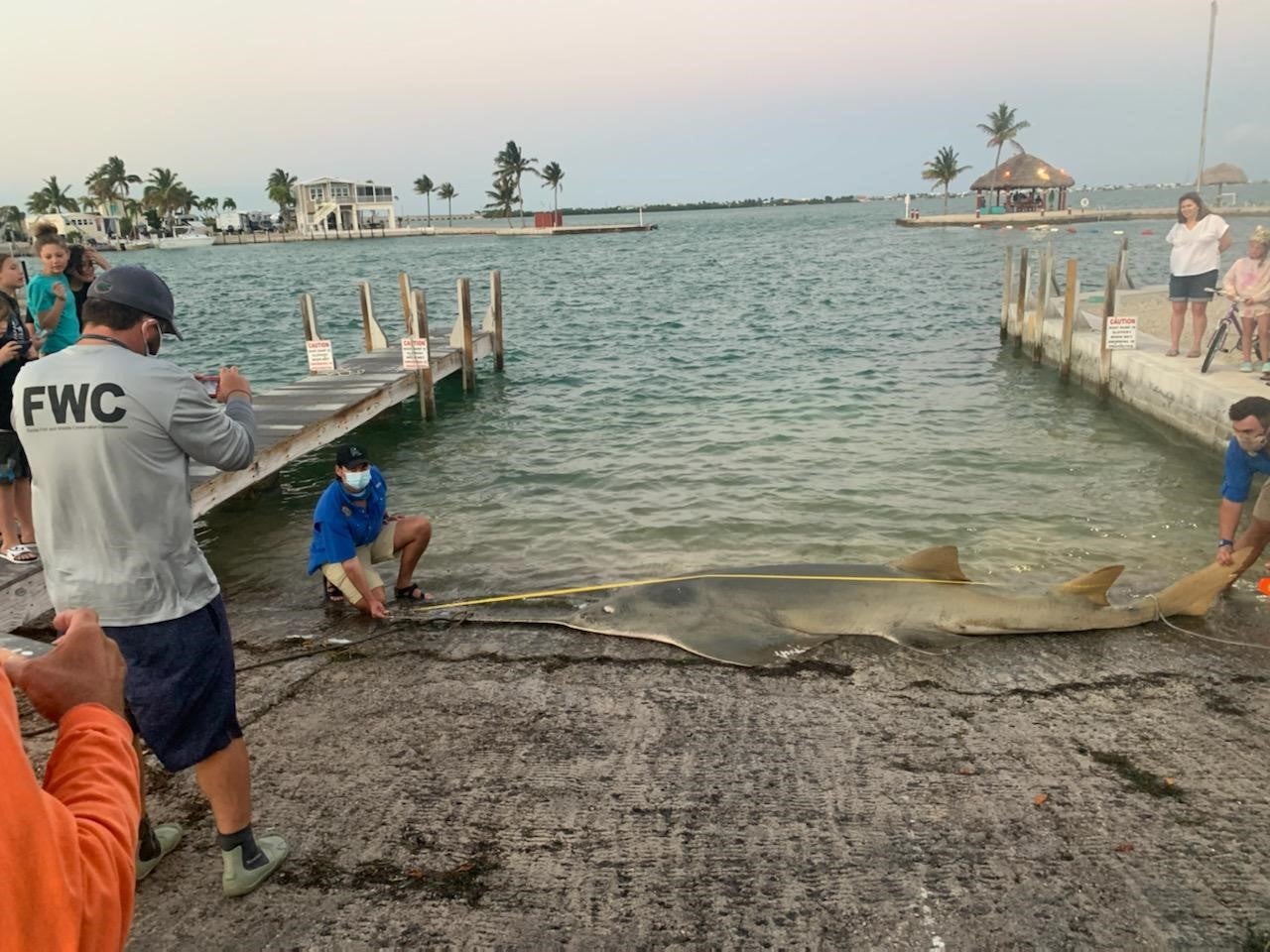 This 16-foot long sawfish was the largest ever recorded. FWC Fish and Wildlife Research Institute via Facebook
SHARE

Last week, Florida Fish and Wildlife Conservation biologists responded to reports of two dead smalltooth sawfish that had washed up on shore in the Florida Keys. The first, a 16-foot long sawfish and the largest ever encountered, weighed an estimated 800-1000 pounds. The second was an immature female at 12 feet, 4 inches long, and weighed an estimated 400-500 pounds. “The 16-foot sawfish is the longest measured by scientists since research began on the species,” said the FWC Fish and Wildlife Research Institute in a Facebook post.

A long, pronounced snout, ringed with teeth, is the hallmark of the smalltooth sawfish. The unusual fish uses its “saw” to attack prey, cutting through schools of fish, stunning some and sticking others. Like sharks, they are skilled hunters that have miniature electro-sensitive organs to pick up finite electric currents produced by shrimp, crabs, and other marine animals. Though they outwardly resemble sharks, they are actually rays, with their gills and mouths located underneath their body.

The odd-shaped fish most often inhabits shallow coastal waters, showing a preference for estuarine environs, and even making occasional forays into freshwater rivers. The smalltooth sawfish’s range in the United States consists of the Southwest coast of Florida, from Charlotte Harbor down to the Everglades. The mangroves in the shallow, warm waters of Charlotte Harbor serve as an important nursery, holding juveniles until they grow to around seven feet. They can also be found in the Bahamas, and anecdotal accounts seem to indicate they may be found in the waters between Cuba, Belize, and Honduras.

Narrow habitat requirements are not a recipe for success, and the smalltooth sawfish became the first marine fish to receive federal protection as an endangered species under the Endangered Species Act (ESA) in 2003. Smalltooth sawfish also take a very long time to reach sexual maturity—about seven years—and must grow to about 11 feet in length, another factor working against them. Litters contain only seven to 14 pups, which take a year to fully develop before being born, and a mother can only give birth every two years. Since they were designated under the ESA, it is illegal to catch, harm, or kill any sawfish.

Read Next: The Fight to Save the Sawfish

The cause of death for either of the two sawfish was not immediately apparent, but FWC officials believe the two mortalities are unrelated. Because of the distance between the two specimens, with one found near Cudjoe Key and the other off Marvin Key, Gregg Poulakis, a fish biologist with the FWC, told Live Science that the “timing is most likely coincidental.” The biologist reports that they typically encounter five or six dead sawfish a year, and glean valuable scientific insights by taking samples from each. This is particularly true when they encounter a deceased adult female laden with eggs, like the record-breaking 16-footer. A necropsy will also be performed.

“There was no obvious cause of death for either sawfish; however, valuable life history information was and will continue to be collected from both carcasses due to the swift response from Keys-based FWC staff and MCSO Florida Keys to secure the carcass for study,” the FWC Fish and Wildlife Research Institute continued in their Facebook post. “Sawfish biologists are working to learn as much as possible from samples they collected. For example, the vertebrae will be used to determine the ages of both sawfish, the DNA will be sequenced to compare to other sawfish that have been studied throughout Florida, and the length at maturity for females will be fine-tuned based on these data.”

You can help with sawfish research by reporting sightings to the FWC: