This is the Farthest Migrating Mule Deer on Record 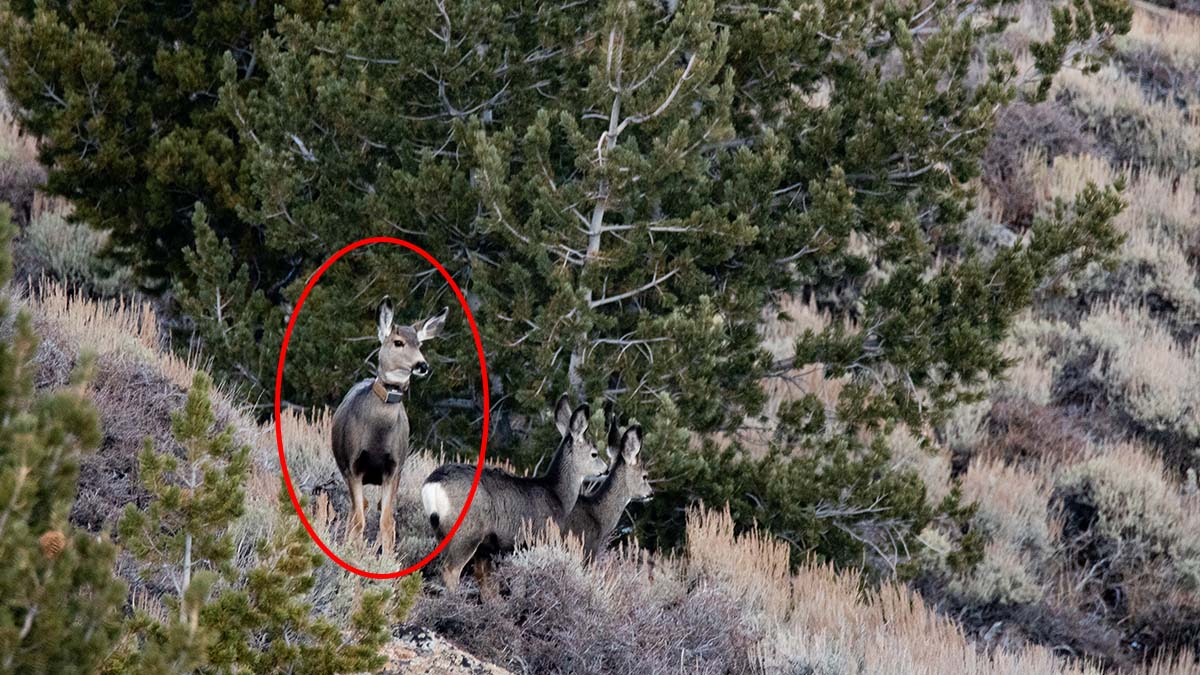 Deer 255 stands with her two fawns at a migration stopover in Wyoming's Green River Basin in fall 2020. Benjamin Kraushaar
SHARE

Scientists have long known that mule deer migrate in the western U.S. But recent research has focused on tracking and mapping their migration routes—and one mule deer has migrated further than any other, according to the Wyoming Migration Initiative.

The muley doe, which is known as Deer 255, was first collared in 2016. Since then, researchers have tracked her as she’s migrated more than 2,100 miles. “What makes this deer really special is that her bi-annual migrations from, the start to end point, is over 242 miles,” Gregory Nickerson, a writer and filmmaker for the Wyoming Migration Initiative, tells F&S. “Of all the deer we’ve collared, she’s the one that’s had the longest yearly migration.”

The data for Deer 255’s migration animation is from the Red Desert to Hoback mule deer study, which was led by University of Wyoming Ph.D. students Anna Ortega and Luke Wilde. Her migration was recently featured in a film edited by Patrick Rodgers of the Wyoming Migration Initiative. Her route includes a checkerboard of public and private land, as well as more than 100 fences. “When we started tracking her in 2016, she went up 160 miles from Red Desert to the Hoback Basin, which a large herd does,” explains Nickerson. “That in and of itself is a long migration. But then she continued on further for almost 100 more miles up into Idaho.”

Nickerson says that out of the thousands of deer that have been collared, the Wyoming Migration Initiative has only identified one other deer with a migration route over 200 miles. He adds that mule deer do not typically migrate over 100 miles. Mule deer migrations from winter to summer ranges are typically timed to coincide with forage availability, allowing deer to feed along the “green-up” each spring.

“Deer 255 is most likely representing a migration route that was identified by previous generations of mule deer,” says Nickerson. “She is traveling to and from habitat she either learned from her mother or some other dispersal event. While a lot of these animals do learn from their mothers, there is a lot of exploratory movement that can happen earlier in their lives. She was likely born in Idaho and spent her first migration going down to the Red Desert and has continued to pursue this ultra-long-distance migration strategy.”

“It’s really hard to say why she does it,” he says. “Mule deer migration is driven by memory.  This migration must’ve been a successful strategy in the past, and so she’s continuing it. There are good habitats that she could’ve stopped at earlier. But by making the super long spring migration, she’s extending the amount of time she can gorge on freshly sprouted plants. She’s a very big deer compared to the average.”

There are no population-level indications of whether mule deer migration distances are increasing or decreasing. That said, drought and changing weather patterns in the last decade have shortened the seasons of peak forage vegetation for mule deer in many parts of the West. Additionally, people are creating more and more migration obstacles with development, roads, and fences.

“As research continues, I’d love to find a deer that travels even further than Deer 255,” he adds. “More research will yield even more fascinating examples of deer migration.”