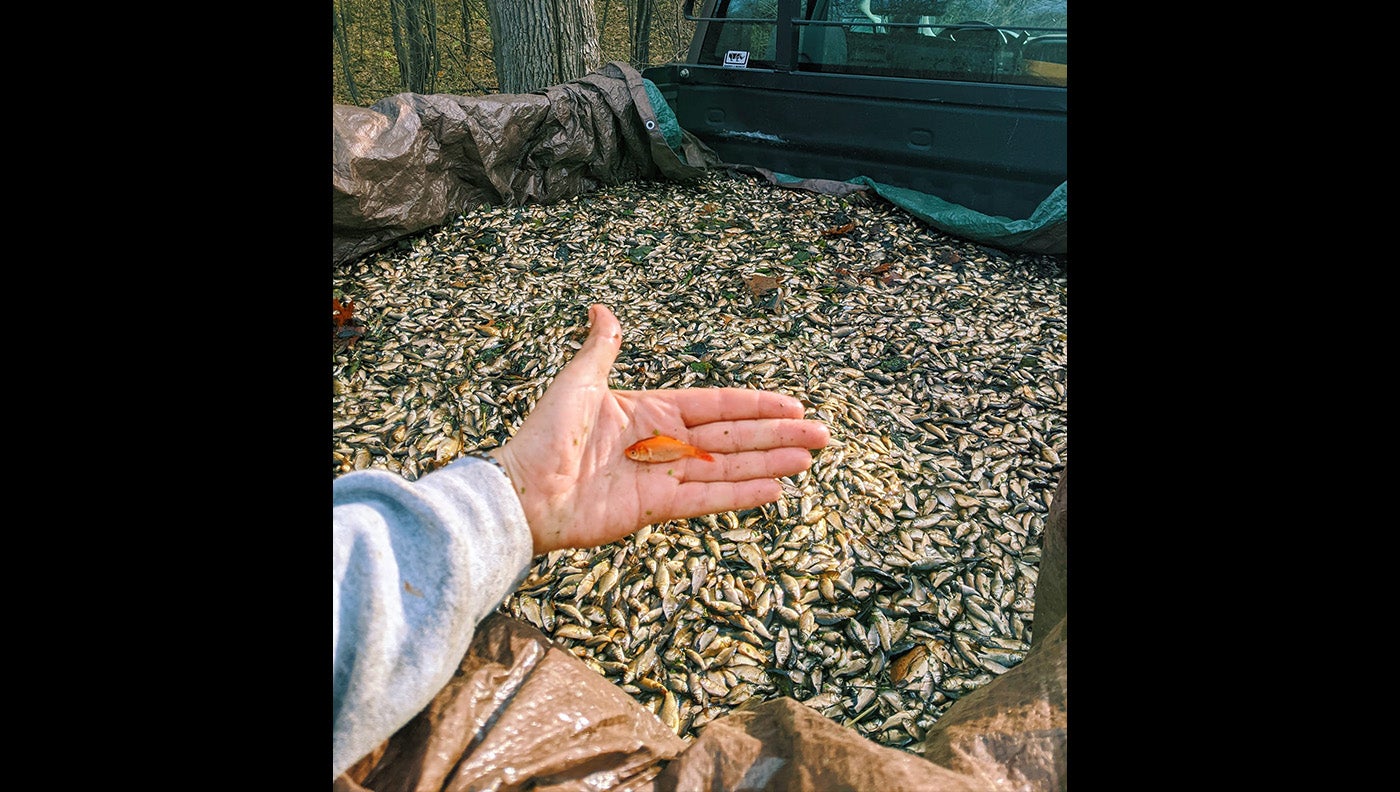 If you need proof that fisheries managers aren’t just blowing smoke when they warn people about the potential ecological harm of releasing unwanted aquarium pets into public waters, look no further than the Grace Chain of Lakes in Minnesota. Employees of the Carver County Water Management Organization (CCWMO) removed a whopping 5,000 pounds of goldfish from Big Woods and McKnight lakes this November. The haul is part of a multiyear reclamation and research project spurred by the 2019 detection at Big Woods Lake of “the most densely populated discovery of goldfish” staff had ever seen. Scientists estimated that 300,000 to 500,000 goldfish may live in the five lakes that make up the Grace Chain, which also includes Lake Grace, Lake Jonathan, and Lake Hazeltine.

With no natural predators, illegally dumped goldfish can multiply rapidly, and because they are hardy, long-lived, and destructive, their impact on ecosystems can be severe. Goldfish can survive the bitterly cold water temps and low oxygen levels during Minnesota winters, can live up to 25 years, and, like their relatives the common carp, stir up sediment, uproot plants, and compete with native fish for food and shelter. “They’re perhaps the only vertebrate animals that can live without any oxygen, which is remarkable,” Peter Sorensen, a fisheries biologist professor at the University of Minnesota told Minnesota Public Radio News. “They can go what we call totally anaerobic, and they just live off sugars and produce alcohol.” This allows them to survive even in shallow lakes that completely freeze over in winter.

After discovering the infestation during routine monitoring in 2019, CCWMO stocked two dozen northern pike at Big Woods Lake to help control goldfish numbers. They also captured and tagged 500 goldfish with transponders to collect data on fish movements to better understand the fish and formulate a plan for their removal. In 2020, the CCWMO removed more than 100,000 goldfish from the lakes. The staff typically uses box nets, seine nets, and dip nets for their removal efforts, but they’re also studying new techniques, including electroshocking, to remove smaller goldfish, which are more numerous and harder to catch. This November’s removal at Big Woods and McKnight focused on culling these smaller goldfish while sparing native species. CCWMO officials reported a by-catch rate of less than 2 percent for non-target fish like fathead minnows.

In a Facebook post detailing the removal effort, CCWMO explained that while many of the fish they collected do not look gold, they are still goldfish. “The goldfish breed their color out eventually because the charcoal gray/burnt orange is more favorable in the environment,” writes the organization. “There are definitely a lot less goldfish with bright colors in this younger population compared to the larger goldfish we removed last fall.”

Minnesota fishing regulations allow anglers to fish for goldfish with hook and line but prohibit their live transport or use as bait. Wildlife officials urge anyone looking to re-home a pet fish to consider taking it to “surrender events,” which are often hosted by the Minnesota Aquarium Society, or check with local veterinarians and pet stores for suggestions on how to place their goldfish with a new owner. Releasing pet goldfish into public waters is prohibited under Minnesota state law.