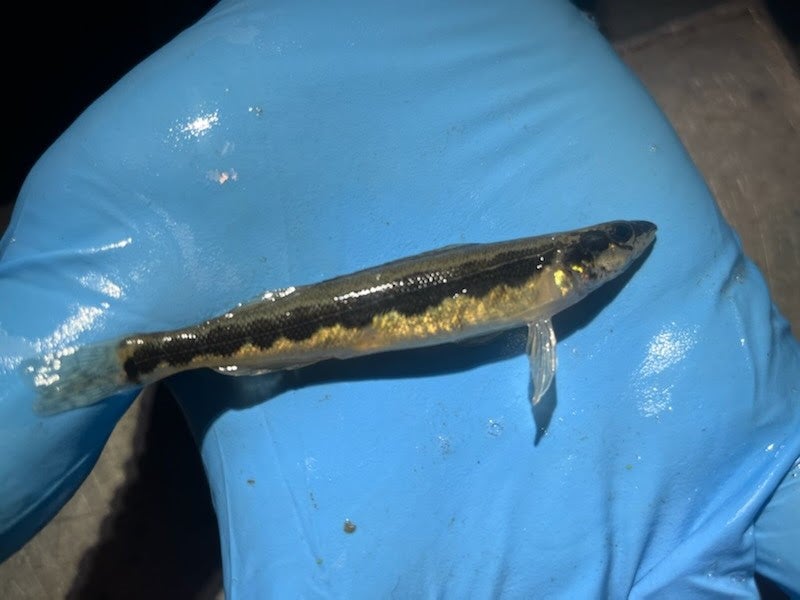 This is the first time this species of fish as been seen in Ohio waters since 1939. ODW via Facebook
SHARE

Last fall, crews from the Ohio Division of Wildlife (ODW) were conducting electrofishing bass surveys in the Ohio River when they made a surprising find: They captured two longhead darters, a species of fish that hasn’t been found in the Buckeye State since 1939.

“Who dis (sic)?” wrote ODW officials in a Facebook post. “Believe it or not, it’s a longhead darter! Why are we so excited? This striking creature, native to Ohio, was thought to be extirpated from the state.” A species is considered “extirpated” when it goes extinct locally but still lives on elsewhere.

According to John Navarro, the administrator of the ODW aquatic stewardship program, the fish were found in two separate locations on the Ohio River. Navarro told the Cincinnati Inquirer that he “definitely” thinks longhead darters are making a comeback in the state and the Ohio River, thanks to reduced runoff and improving water quality.

Longhead darters have distinctive olive-yellow bellies and a splotchy black stripe down the length of their bodies. They can reach about five inches in length and thrive in clean water, swift-moving currents, and rocky stream beds. Not much is known about the lifecycle of the species, but biologists believe that they spawn between March and May. Adult longhead darters eat crayfish and mayflies, according to the Guide to the Fish of Ohio.

According to the New York Department of Conservation (DEC), longhead darters have been known to live in Kentucky, New York, Ohio, Pennsylvania, Tennessee, and West Virginia. The DEC says the fish is “uncommon” and considered “threatened in all states where it occurs.” The longhead darter is so rare and difficult to study that the International Union for Conservation of Nature, which keeps tabs on populations of different fish species worldwide, is unable to list the status of the longhead darter due to a lack of data.