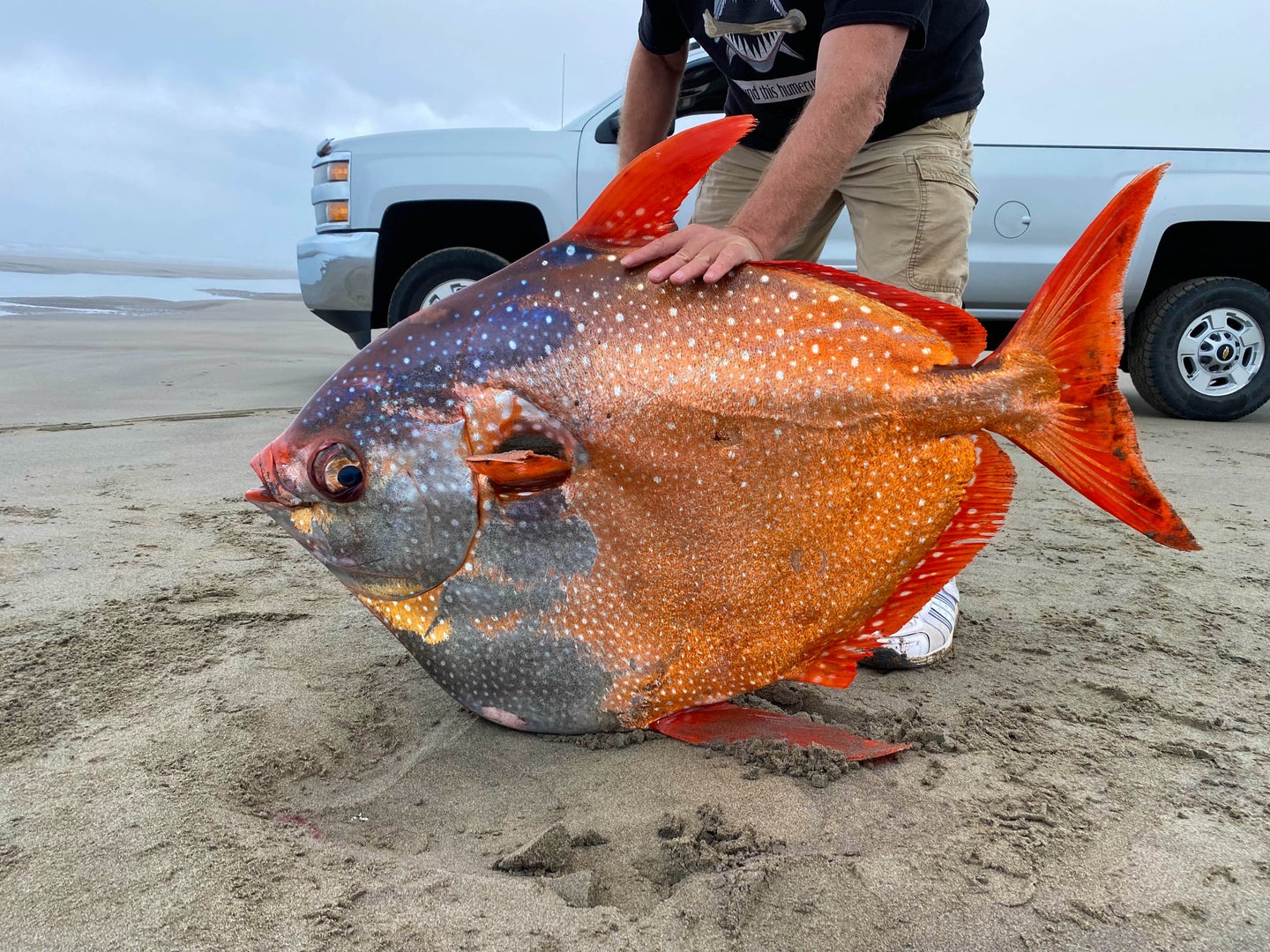 A 100-pound opah washed up on Sunset Beach in Northern Oregon last week. The strikingly colored, oblong-shaped fish was a unique—and rare—find. Beachgoers quickly alerted staff at the Seaside Aquarium, which documented and collected the beached fish.

“I wouldn’t expect an opah that size to normally be off Oregon,” National Oceanic and Atmospheric Administration (NOAA) Fisheries biologist Heidi Dewar told the Washington Post, noting that warming water temperatures have been pushing many species of fish north.

The opah, which are also known as moonfish, was 3 ½ feet long and nearly as broad. The specimen’s orange and baby-blue coloring with white speckles were still vivid, meaning the fish had likely died recently. It was the first opah found in the area in recent memory and, according to a Seaside Aquarium Facebook post, “created quite the stir.” The Seaside Aquarium quickly partnered with the Columbia River Maritime Museum on plans to give local students an opportunity to dissect the fish this fall. Samples from the fish will then be used for scientific research.

What is an Opah?

Scientists know relatively little about opah, but here’s what is known:

Can You Fish for Opah?

Moonfish are not a popular target for sport nor commercial fishermen, which is one of the reasons that so little is known about them. That said, they can be caught—though targeting them is extremely difficult.

Commercial anglers occasionally catch opah while long-lining for bigeye tuna off Hawaii. NOAA studies also suggest that a good-size population of opah exists off the coast of Southern California and Mexico’s Baja Peninsula. If you’re set on catching an opah, try one of these regions.

Opah are difficult to catch because they live so deep below the surface, though some surprise catches have occurred near the surface and in shallower areas. One of the best-known ways to catch opah is by getting a heavy jig deep, twitching it a couple of times, and then retrieving it quickly.

“The guys who have caught [opah] have often inadvertently let the jig drop deep while they picked out a bird’s nest or an under-wrap,” Capt. Aaron Remy of the Searcher told Salt Water Sportsman. “Once they’re done, they bring the jig in quickly, and that’s when they get bit by an opah. But you’ll have to be patient and focused. It’s hard to bet on a long shot at hooking an opah, especially when we have tuna foaming off the transom.”

NOAA longline surveyors have used frozen mackerel to catch opah for scientific studies. Recreational anglers could also consider a bait-soaking strategy, using soak frozen squid or mackerel at varying depths. Catching an opah on a hook and line would make for a rare—and potentially tasty—catch for any angler. Opah are known to have a light flavor and are not currently a protected fishery.