Opinion: Why Relisting Gray Wolves Is So Wrong—and Hunting Seasons Are So Necessary

A U.S. district judge’s decision to restore federal protections to gray wolves under the Endangered Species Act has our Midwest-based field editor befuddled and angry 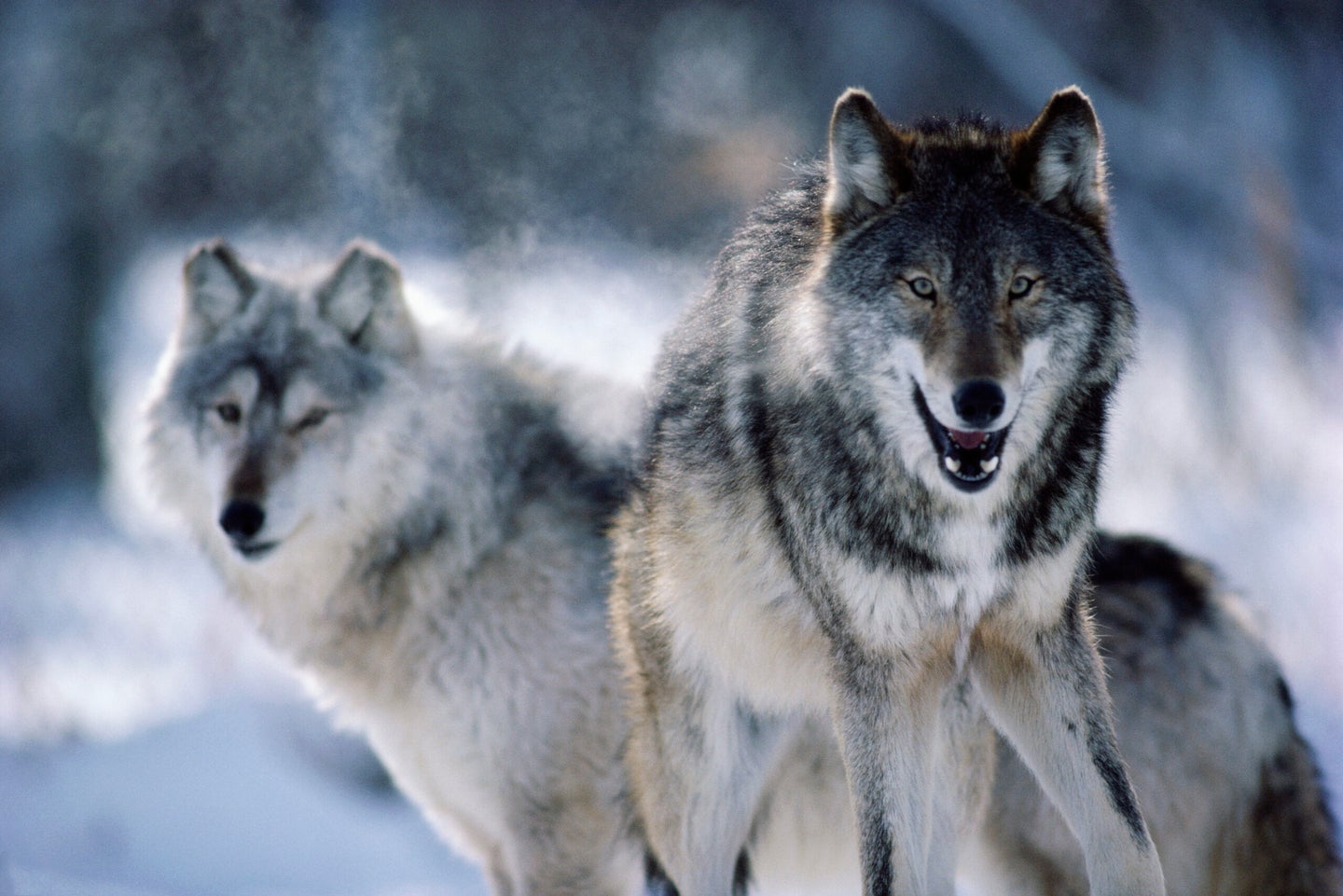 Gray wolf conservation is a success story. Why are they back on the Endangered Species List?. Layne Kennedy via Getty Images
SHARE

Wolf management continues on a roller-coaster ride wild enough to be featured at an amusement park. Except there’s nothing amusing about it. The latest hairpin turn occurred last Thursday, February 10th, when U.S. District Court Judge Jeffrey White of Oakland, California, sided with an array of environmental and anti-hunting groups, including the Humane Society of the United States, and ruled that wolves–removed from protection by the Endangered Species Act (ESA) last October by the U.S. Fish & Wildlife Service (FWS)–must be returned to that list.

While Judge White’s ruling does not impact wolves in the Northern Rockies, where the predators were delisted back in 2011, it immediately restores federal protections to wolves in other parts of the West and in the Upper Midwest, where the largest populations of gray wolves in the Lower 48, by far, reside. I live here too, in Minnesota, and while I’m certainly not shocked by this decision, I will say that as a hunter, and a person who lives in wolf country, and one who believes that these creatures belong on the landscape, I am befuddled—and angry.

Wolves Are a Success Story

The gray wolf should be the poster child for the Endangered Species Act—a shining example of how it should work. Their numbers were as low as 350 animals in Minnesota and a mere handful in Wisconsin and Michigan as recently as 1960. Now, midwestern populations total more than 10 times that. We should be celebrating the success of this recovery. Instead, by re-listing gray wolves, Judge White has essentially called it a failure, snatching defeat from the jaws of victory.

How a judge whose bench is comfortably situated in California could ignore actual numbers on the ground here and the expert opinion of local biologists is befuddling to say the least. Minnesota wolf populations have hovered between 2,500 and 3,000 for years, and the Wisconsin DNR estimates that as many as 1,300 wolves inhabit that state. The Upper Peninsula of Michigan harbors around 700 wolves. All three states have long ago met or exceeded original management goals, and, if estimates of nationwide wolf numbers of 6,000 are correct, this area hosts nearly 70 percent of the U.S. population of gray wolves. These populations are simply not endangered, and the numbers prove it.

3 Reasons Hunting Needs to Be Part of Wolf Management

Hunters, of course, are often accused of the basest motivations in this arena, despite our leading role in conservation and our rich history as naturalists. So I’ll just point out here that my personal desire to kill a wolf hovers only slightly above the “zero” mark. I think I join most outdoorsmen and women in celebrating the wolf’s recovery and recognizing that these apex predators belong on the landscape. But make no mistake that proper wolf management must include regulated hunting and/or trapping seasons, and the authority needs to return to the states as quickly as possible—for scientific, practical, and social reasons.

Let’s take science first. While most wolf proponents would be happy to never see a single animal killed, all but the most deluded must recognize that this is a fantasy. All animals–but especially megafauna–have their place in an ecosystem, and while too few is a sad situation, too many can have troublesome biological repercussions. Wolf numbers have to be in tune with a landscape, and who better to do that job than the state biologists who continually study and monitor local populations. At the time of Judge White’s ruling, Midwestern state biologists were in the midst of re-assessing exactly that and updating management plans. Now, with management shifting from state to federal oversight, it’s not clear that this vital work will continue.

L. David Mech, the Minnesota-based researcher who has studied wolves more intensely than anyone and helped create the International Wolf Center, an educational institution revered by wolf proponents, supports this view. On his personal website, Mech responded to the 2020 delisting process by saying “I believe that the way wolves should be managed is whichever way each state decides. Individual citizens have individual opinions about wolf management. State legislatures and Departments of Natural Resources must balance all these many conflicting views while ensuring that their wolf populations survive but conflict minimally with humans. As long as the wolf is no longer endangered in a particular state, I support that state’s approach to managing its wolves.”

On the practical side, dealing with depredating wolves–an increasing problem as wolves expand their range and encounter more farmers and ranchers–is expensive and time-consuming. Though few outside of wolf range might realize it, federal trappers remove scores of wolves from the landscape each year, and those trappers don’t work cheap. In my home state of Minnesota, about 200 wolves are trapped and killed annually, which is only slightly more than the number of problem wolves removed in Wisconsin and Michigan.

Dollars raised from license fees and preference points for a limited number of wolf hunting and trapping licenses can offset the expense of USDA trappers. Wisconsin hosted a lottery-based wolf hunt from 2012 to 2014 (when wolves were finally, though briefly, delisted), and in 2012 alone, revenue from wolf applications and license fees raised $289,865 for the DNR, a number that nearly matched annual expenses for federal trappers. Obviously, money spent in restaurants, hotels, sporting goods stores, and bars located in wolf range (typically small, northern towns that benefit hugely from tourism dollars) are an added benefit.

The social benefits from ceding wolf management to states is probably the biggest win of all. While wolves have many ardent and vocal champions, the ones who speak loudest rarely live where wolves do. I’ve spent lots of time in northern Wisconsin and live in Minnesota, and I know that tolerance for wolves is decreasing annually among residents there, especially if your annual calf crop is raided or your favorite bear hound or bird dog encounters a wolf pack and is killed. When an animal that’s relatively common is not only doing damage, but under Federal protection (fines for killing a wolf can approach $5,000), any warm-and-fuzzy notions of the wolf’s place in the ecosystem erode and, in some cases, leads to poaching.

In a 2019 interview with Michigan Live, Kevin Swanson, wolf wildlife specialist with the Michigan DNR, said “If the Michigan DNR had the ability to manage [wolves] sustainably as we do with black bears, bobcats, and many other game species, that would serve to protect wolves. It wears on people after a while; when they know we have a recovered population that should not be considered an endangered species. A lot of animosity builds when wolves are protected when they shouldn’t be. People are frustrated with the back-and-forth relisting and delisting.”

Finally, I’ll end where this latest ride on the wolf roller coaster started: the wildly controversial February 2021 hunt in Wisconsin, which set off a national firestorm of protests that is undoubtedly linked to Thursday’s ruling. Wolf advocates pointed, and still point, to that hunt as the perfect example of why management should not be left to the states and/or should not include hunting and trapping. I’ll be the first to admit that the hunt was far from ideal, but I will also argue that when considered logically, as opposed to emotionally, the Wisconsin hunt is the perfect example of just the opposite—why management must be led by state biologists and not the courts.

During that fiasco, a pro-hunting group based in Kansas, no less, won a court decision that basically demanded that the state host a wolf hunt, and immediately—which was much much sooner than DNR biologists advised. Hunters blew past the agency’s hastily decided pre-hunt quota of 119 wolves (not including 81 animals allotted for Native American tribes) and killed 216 animals in just three days. The backlash took even less time. But ask yourself: Is this an example of bad management by the state? Or is it an example of a court ruling getting in the way of proper management by trained professionals?

There’s another key take-away from that Wisconsin hunt, and it is the simple fact that hunters were able to kill that many animals in just a few days. For better or worse, it absolutely proves just how abundant wolves are in parts of Wisconsin. These animals are well-established and will continue to be a vital part of the wild landscape. But keeping their numbers in tune with the available habitat and with minimal conflicts with humans will never be properly accomplished by animal-rights groups, or judges in distant states, or any other courts for that matter. Wolf management is best left to boots-on-the-ground professionals who live and work in the states that host the animals themselves—and as long as the numbers warrant it, as they do now here in the Midwest, that management must include hunting and trapping seasons.