Are Game Wardens Watching You? – Part 1: The Case of the Hidden Trail Camera

What would you do if wardens planted a trail camera on your property to spy on you? Hunter Hollingsworth sued and won—and now game-law enforcement may never be the same 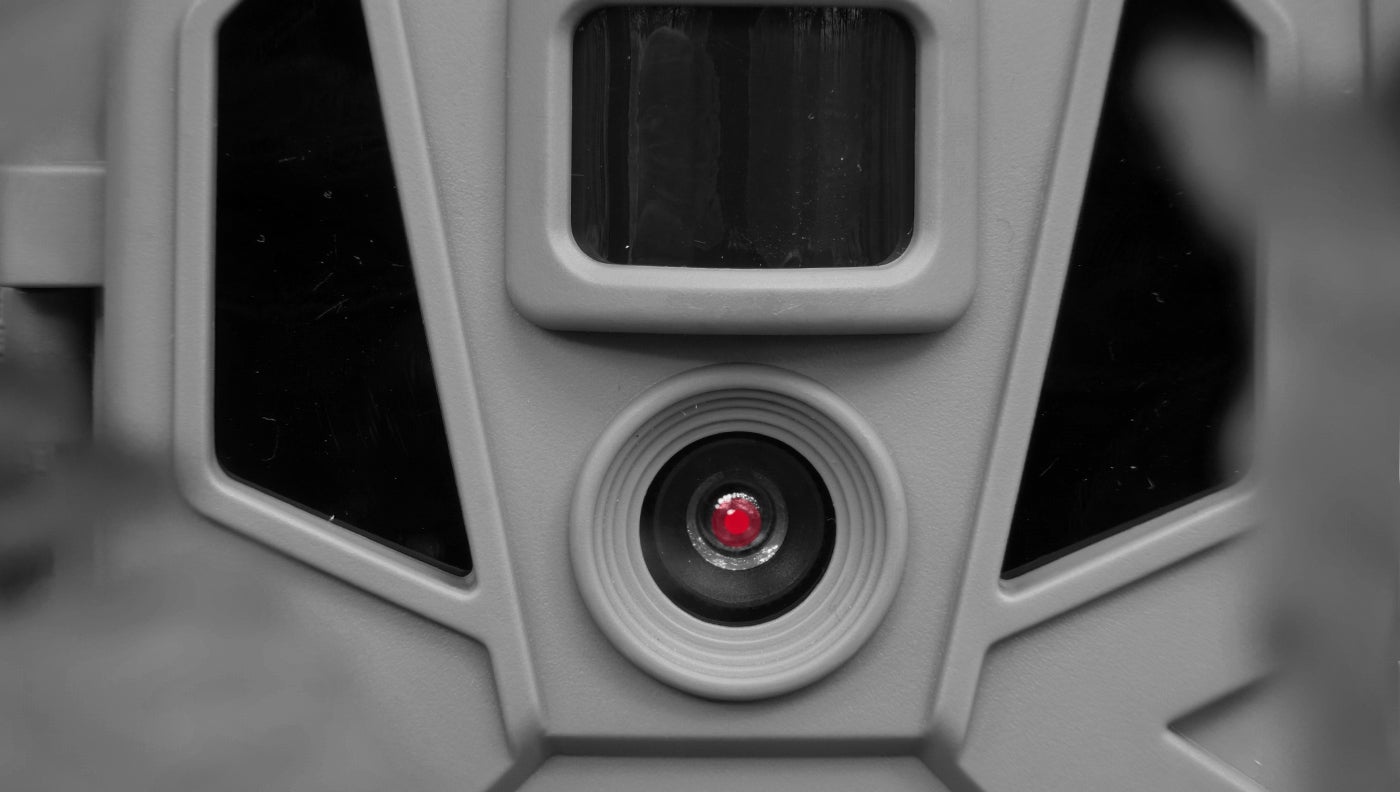 “Are Game Wardens Watching You?” is a three-part F&S exclusive. Here, in Part 1, we dive deep into the unlikely story of a private-land hunter who sued game wardens after they a planted trail camera on his property—and ultimately won in a state court. Should we see this as a victory for hunters—or as a threat to the North American model of conservation as we know it?

Imagine you go hunting one morning, on your own land, and you find a cellular trail camera that isn’t yours. Now imagine that the camera was obviously placed in such a way as to be entirely hidden from you—except for a hole cut through the brush so that it could surveil the comings and goings on your property.

You’d probably be creeped out and pull that camera down, right? That’s what Hunter Hollingsworth of Camden, Tennessee, did when he spotted an unknown trail camera pointed toward the gravel road through his family farm.

Then a few months later, he found his home surrounded by armed law-enforcement officers who threatened to kick his door down if he didn’t let them inside to search for the camera. This was just the beginning of a series of events that snowballed into a lawsuit that would eventually put a national spotlight on the near century-old practice of game wardens entering private land without a search warrant. The case would go on to fundamentally change how officers with the Tennessee Wildlife Resources Agency are able to do their jobs—and it could set precedents for similar cases in other states, too.

But no matter where you live and hunt, the Hunter Hollingsworth case—and the cases it continues to inspire—could ultimately decide whether you might one day find a camera hidden in your trees, or a game warden on your property without a warrant.

A Wiretap with Trail Cams

Camden, located in western Tennessee, is a town of less than 4,000. Land Between the Lakes, the Tennessee National Wildlife Refuge, and several WMAs are all within an hour’s drive. It’s a storied waterfowl hunting area, with numerous draw blinds and plenty of private, managed duck holes. In other words, it’s a great place to live if you love to hunt and fish. Hunter Hollingsworth, 31, grew up in Camden. His dad was a family doctor with a local practice, and his mom was a school nurse. Hollingsworth graduated from UT Martin with a degree in Wildlife Biology and works as a railroad technician for CSX Transportation.

The Hollingsworths own land—though not a sprawling amount at around 90 acres. Growing up, Hollingsworth spent much of his time on the family farm, hunting with his dad or his buddies, or working on dove fields, duck blinds, and food plots to get ready for the next season. He still takes friends and their kids hunting on the property, and he used to camp there frequently. When he and a buddy were driving through the property before daylight on January 26, 2018, to go duck hunting, something out of place caught Hollingsworth’s eye. This was at the end of duck season when the woods are mostly barren, but a pair of small scrub oaks in the bend of the road had held their leaves all winter, and there was something reflective up in them, maybe 12 feet high.

Initially, Hollingsworth thought it was the glowing eyes of a raccoon. When he shined his flashlight into the tree, though, he realized it was a trail camera—and not one that he recognized. “I saw that the antenna of it was taped in camo tape,” Hollingsworth told F&S. “I knew Dad wouldn’t have put a camera up in a tree that high or on the road, and I knew I didn’t put it there. When I saw the antenna, I knew it was the type that sent stuff to an e-mail or phone. So I came up behind the camera and took it down.”

Some other friends were meeting Hollingsworth at the duck blind later that morning, one of whom happened to be an attorney. Hollingsworth didn’t know for sure who’d placed the camera on his property, but, given his recent run-ins with the TWRA, he suspected game wardens had done it. In December 2017, Hollingsworth had been checked while duck hunting on his property by two TWRA officers, including Officer Kevin Hoofman. Hoofman and another officer had checked Hollingsworth earlier in the fall, too, during a September dove hunt. They entered the property both times with a warrant—which they told Hollingsworth they didn’t need. Hollingsworth claims he was being harassed.

After the duck hunt that morning in January, Hollingsworth took the camera home and plugged the SD card into his computer. Sure enough, he saw photos of Hoofman as well as U.S. Fish & Wildlife Special Agent Kyle Lock, another officer from the area. Time stamps on the photos showed that the camera had been up for a couple months and had taken numerous photos of Hollingsworth and his guests, as well as fish and wildlife officers coming and going. Hollingsworth said the batteries were all but dead when he pulled the camera. He put it in his gun safe, where it stayed all spring and summer without Hollingsworth hearing anything about it.

“I didn’t think that I’d done anything wrong,” he said of removing the camera. He added that his attorney even, “called the government to ask about the camera, and they wouldn’t confirm or deny it.”

Then, when the 2018 dove season opened in September, officers with both the TWRA and USFWS showed up to check Hollingsworth’s field. He was hunting there with several buddies, and says he became agitated, cursed at the officers, and told them he was being harassed. Hollingsworth claims they handcuffed him and threatened to take him to jail. But in fact, they didn’t write a citation to anyone that day.

About a month later, Hollingsworth was at home and had just finished breakfast when he heard a knock at the door. He assumed it was a friend of his, because they had plans to work on a duck blind. Instead, he saw Special Agent Lock outside. At first, he thought Lock was alone and had come to talk to him about the dove field. But he soon realized that wasn’t the case. Multiple officers—Hollingsworth estimated 10 to 12—surrounded his house. “(They had) bullet-proof vests on,” Hollingsworth says. “They had extra magazines on their vests, some of them had First-Aid kits, they had pistols, shotguns, assault rifles. I mean decked out.”

Hollingsworth told them to leave because he had nothing to say, but he said Lock informed him that they had a search warrant and would break the door down if Hollingsworth didn’t open it. After seeing the warrant, Hollingsworth opened the door.

“They grabbed me, put me outside in the swing,” he said. “They asked me, ‘You want to do this the easy way or the hard way? We’re here for the camera you stole.’”

The officers found the camera and left. A few weeks later, Hollingsworth was contacted by USFWS agents and told that he was being charged with multiple wildlife violations, along with theft of government property—the trail camera. He took a plea deal on one of the charges in exchange for dropping the others, and he lost his hunting license for three years.

Frustrated, Hollingsworth wanted to push back. His attorney had questioned the legality of the hidden camera on the farm and suggested Hollingsworth file suit, which he eventually did. But the case was thrown out of federal district court. By that point, legal bills were stacking up. “I don’t have the money to fight the government,” Hollingsworth said. “Most people don’t. They’re starting several car lengths ahead.”

But then the Institute for Justice, which describes itself as a “non-profit, public-interest law firm,” took interest in the case. “We saw that (the Hunter Hollingsworth) case had just been dismissed by federal district court,” said Josh Windham, attorney for the IJ. “After we started looking into Hunter’s situation, we learned that a neighbor of his just down the road, Terry Rainwaters, had a similar experience around the same time.”

Rainwaters’s son, also named Hunter, had found two trail cameras, suspended from fishing line, monitoring a gravel access road through the family property and bordering property that Rainwaters leases. One of the cameras had a view of the back of a tenant’s house on the property. “At this point, we’re sufficiently creeped out and interested in what’s going on, and so we do some more digging,” Windham said. “We learn from Terry and Hunter Hollingswoth that it’s not just the cameras. They’re the tip of the iceberg. There’s a long history of state wildlife officers entering their property without consent, without a warrant, and just spending hours wandering around, looking for potential violations of the state’s hunting laws.”

Rainwaters joined Hollingsworth in the case, and the IJ filed suit against the TWRA, and individually against TWRA Executive Director Bobby Wilson, former Executive Director Ed Carter, and Officer Hoofman. They ultimately won. In March of 2022, a three-judge panel declared the warrantless searches unconstitutional and awarded $1 “in nominal damages for constitutional injury,” which defendant Carter was ordered to pay.

Though the TWRA appealed the decision, Tennessee wildlife officers are now required to obtain a search warrant before entering private property. It’s a decision that’s been celebrated as a private-property-rights victory by many. Meanwhile, the Institute for Justice is currently working on similar cases involving hunting clubs in Pennsylvania, which claim they’ve been harassed by warrantless searches from wildlife officers.

Open Fields in the Crosshairs

Much of the coverage of the case has framed Hunter Hollingsworth as something of a folk hero—the private-property owner who sued the game wardens and prevailed in court. The odds would’ve seemed decidedly stacked in the government’s favor, too, thanks to the protection of the Open Fields Doctrine, which has its roots in a 1924 prohibition case. That case ruled that the special protection accorded by the Fourth Amendment to the people in their “persons, houses, papers, and effects” didn’t extend to “open fields.” More simply put: For almost a century, game wardens in most states have operated to protect publicly own wildlife on wild lands—public and private—without a warrant because those lands are considered “open fields.”

Josh Windham and the Institute for Justice didn’t challenge Open Fields in this case, but instead argued that the Tennessee state constitution prohibited the warrantless searches. Still, Windham believes the Open Fields Doctrine is “archaic, partly because it was established long before things like cellular trail cameras and drones existed.” The firm’s ultimate goal, he said, would be to bring a federal case challenging the constitutionality of the Open Fields Doctrine. That could change the way game wardens everywhere can operate—and could in fact have ripple effects to the North American Model of Conservation.

So, is Hunter Hollingsworth a hero? Were fish and wildlife officers harassing him over a personal vendetta? Of course, it’s not that simple. After days of poring over court records and time spent talking to him face to face, we learned that Hunter Hollingsworth has a long history of poaching, including during that very duck season when he found the camera. Wardens were watching him for a reason.

Read Next: Are Game Wardens Watching You? — Part 2: The Poacher with a Past.