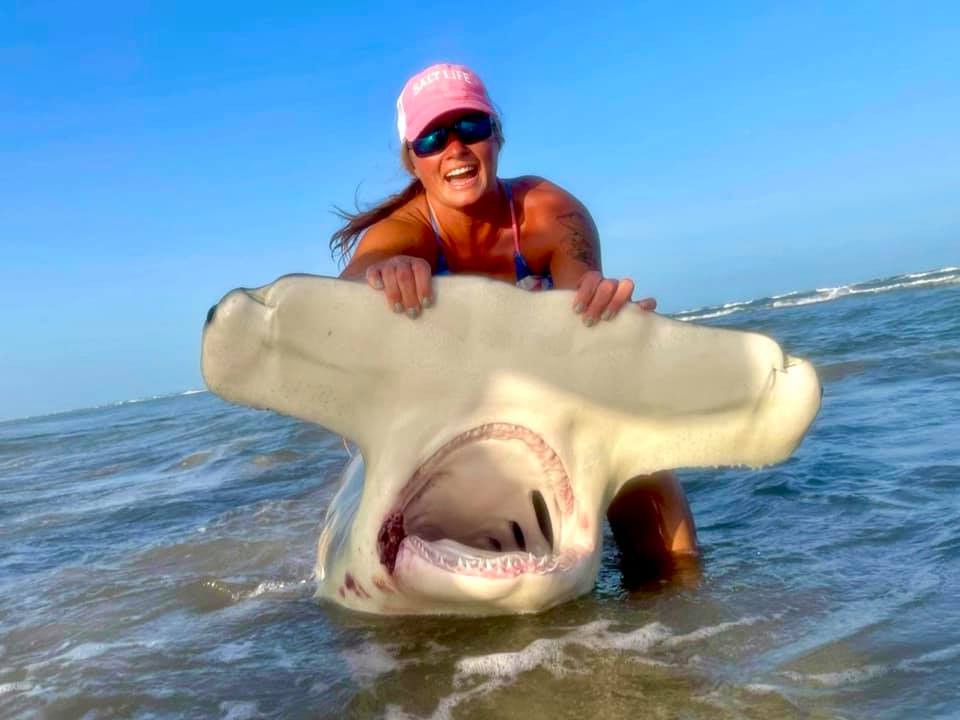 Look at the size of that mouth. Jen Merchant
SHARE

Corpus Christi fishing guide and conservationist Jen Merchant caught her personal best hammerhead shark on North Padre Island, TX, during Labor Day Weekend while fishing from the top of a pickup truck parked in the sand. Merchant was soaking a pan-sized frozen cownose stingray for bait when she hooked into the massive shark.

She fought the 11.5-foot hammerhead for 45 minutes in an effort that left her sore for days. “I was stoked,” she told MySA. “I’ve been trying to get one over ten feet for a while. It’s definitely satisfying to achieve my personal best.”

Merchant and her team—which includes her husband Tim Merchant and friend Dustin Hickey—were participating in the Texas Shark Rodeo, a catch-photo-release shark-fishing tournament in which anglers tag sharks and collect data that can be used to support conservation efforts. More than 8,000 sharks have been caught as part of the tournament since 2014. As the team collected a DNA sample and inserted a GPS tracking tag near the shark’s dorsal fin, they noticed multiple hooks embedded in the shark’s mouth, including one that was “rubbing his jaw raw,” according to Merchant.

“I bet this fish was totally relieved that we were able to get this hook out and that he was able to swim away without that being there to hinder him anymore,” she said in a Youtube video detailing the catch. Merchant posed for several quick photos with the hammerhead before she and her team walked the shark out into deeper water so that it could swim away. “My favorite part of catching a fish like this is letting it go,” she added. “We’re all excited. We’re all happy. It’s just the best feeling.”

Merchant, an East Texas native, has been fishing along the Texas coast for 11 years. She takes pride in promoting catch and release and keeping beaches clean. She teaches fishing lessons for beginners and also leads more advanced anglers on guided surf fishing tours for redfish, tarpon, mackerel, and, of course, sharks.

Hammerheads can top out at about 15 feet long. With eyes and nostrils at the tips of their oddly-shaped heads, they are excellent hunters. Hammerheads prefer a diet of stingrays, which they can eat whole in one bite. They have rarely been known to attack humans.