Watch Three Men Save a Pet Dog from 12-Foot Anaconda

In this edition of The Rewind, a world-renowned herpetologist breaks down a harrowing 2018 encounter between a massive constrictor snake and a small dog 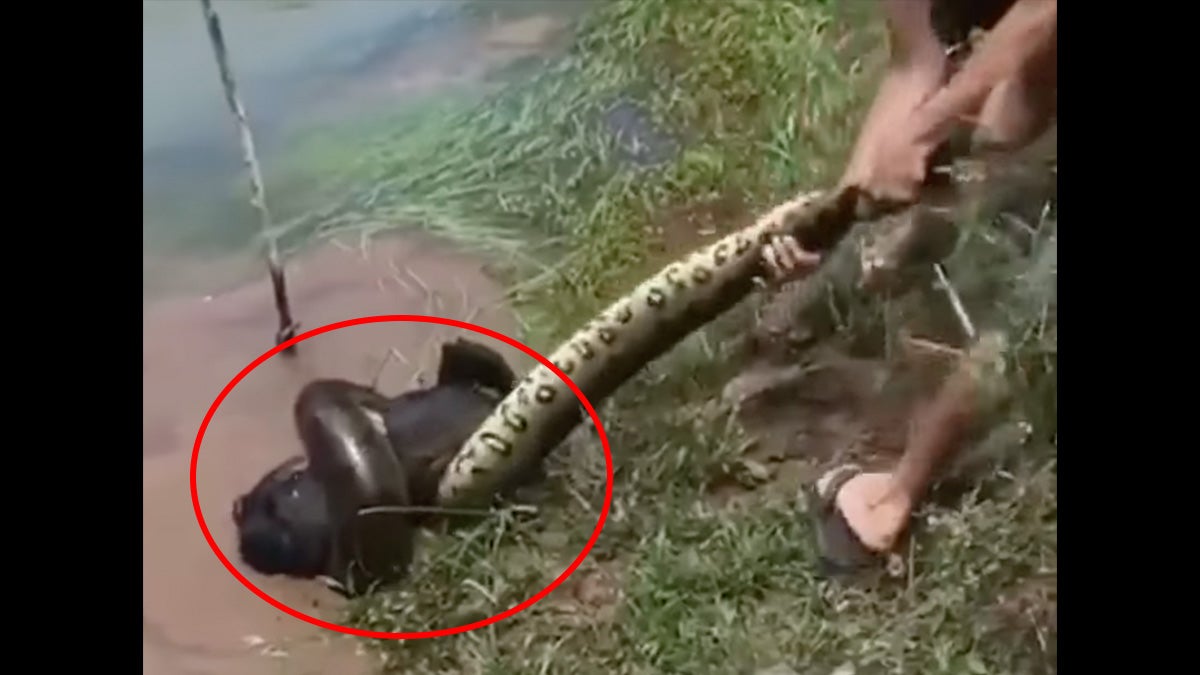 What would you do if your dog ended up in the grips of the world’s largest snake? Three men featured in an epic Nature’s Brutal Instagram video faced just that scenario in 2018. At the beginning of the video, a man reaches toward the muddy edge of a small stream in the Brazilian Amazon and rotates a massive form in the water. He grabs a tail and pulls as another man rushes to his side and helps. The long spotted underbelly of a huge snake emerges—an anaconda.

Snake expert Dr. Jesús Rivas, a biology professor at New Mexico Highlands University, tells F&S it is a female green anaconda. “Only females grow that big,” he explains, noting that the snake appears to be 14 feet long. “As for mass, I would say she was 82 to 88 pounds. She was not very fat.”

As the men in the video pull the giant snake out of the water, the snake partially uncoils, and the back end of a small dog flops to the ground. A third man joins and helps the other two drag the snake away from the water.

Can Humans and Anacondas Coexist?

Rivas says that it is possible for humans to live with anacondas, but the enormous species of snakes “need pristine habitat with lots of wild game.” Problems arise when there are too many people and anacondas in the same place. “First, people kill the game— the deer, peccary, and capybara—that anacondas naturally prey on. Then they kill the anacondas themselves,” he says, adding that anacondas would not normally prey on domestic animals.

After the men in the video drag the snake for about 25 yards, one of the men attempts to pry the small canine free. Unable to do so, he grabs a metal pole and beats the snake with it. After three strikes, another coil unfolds, and the anaconda almost doubles in length—but it still holds the dog in its jaws. After another blow to the head, the anaconda finally releases it. The dog jumps up and appears to be fine despite the harrowing ordeal.

“As a dog lover, I can relate to the feelings of the people,” says Rivas. “As an anaconda lover, I am thankful that they did not use a machete. In most cases, the anaconda is killed with the machete that everyone has nearby.” In contrast, Rivas says the snake in the video likely survived the incident, suffering some broken ribs at most.

Anacondas are currently not considered a threatened species. However, according to Rivas, anaconda habitats are increasingly being encroached upon by humans. “If human development continues undeterred and people keep raising beef, growing soy and corn for ethanol, and extracting gold and petroleum, anacondas, like the entire Amazon, will one day be threatened,” he says.

The green anaconda, which lives in the tropical regions of South America, is the largest member of the boa family and is considered by some scientists to be the largest snake in the world. According to National Geographic, it can reach 30 feet in length and 550 pounds, with a 40-inch girth.

The big snakes hunt by ambush, often camouflaging in murky waters, then using the element of surprise to snatch their prey with their mouths. They typically wrap their bodies around their victims, then drag them underwater to drown them, before swallowing their quarry whole.