The Rewind: Giant Wels Catfish Beach Themselves While Hunting Pigeons 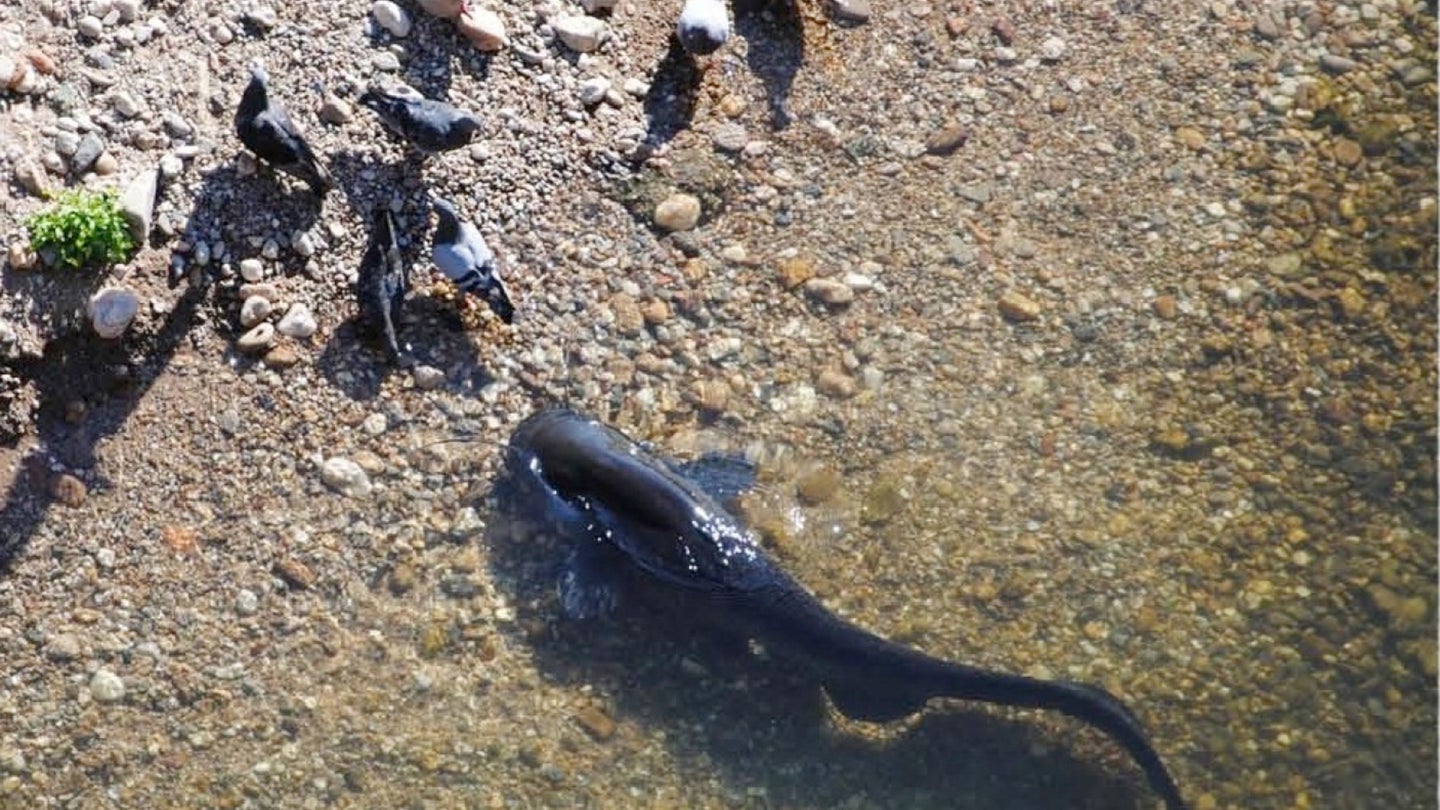 Frederic Santoul had been researching wels catfish for nearly a decade when he got a phone call in 2011 from an angler who fishes the Tarn River in southern France. As an assistant professor of biology and ecology at Paul Sabatier University in Toulouse, Santoul often works with anglers, who help collect stomach contents and additional data that Santoul uses to study the ecological impact of the large species of catfish. But this time, the fisherman’s field report bordered on the unbelievable.

“He told me, ‘Something strange is happening in the town of Albi,’” Santoul says. “It seemed that some catfish were foraging on pigeons.”

Albi is home to many wild pigeons that take advantage of the shallow gravel bars on the Tarn River. Wels catfish were queuing up at sunrise to snatch pigeons off these tiny islands, sometimes beaching themselves in the process.

Wels Catfish Are an Invasive Species in Western Europe

Wels catfish are native to eastern Europe. The species is thought to have been introduced to western European waterways by anglers in the 1970s and ‘80s. They are now found throughout France, Italy, and Spain. Wels can grow to 10 feet long and weigh more than 300 pounds. Females lay as many as 25,000 eggs when they spawn. Members of the species can live for decades, and some scientists believe the warmer waters of western European rivers may allow them to spawn more often than they do in their native range. Understanding the catfish’s impact on anadromous fish such as salmon, lampreys, and allis shad had long been the focus of Santoul’s research—until he found out they also hunted pigeons.

Following the angler’s report, Santoul spent a summer in Albi videotaping the wels as they practiced the “amazing adaptation” of feeding on pigeons. He observed the fish lurking in the shallows with their dorsal fins and backs protruding above the surface of the clear water, waiting for pigeons to arrive. As the birds jostled for position, the catfish moved in, opening their gaping mouths to engulf their prey, sometimes driving their bodies far out of the water to snatch birds off the gravel bars.

“The first time we saw this, we said it was exactly the same beaching behavior that is well known in the killer whales,” Santoul says. “It’s incredible.” One element makes the maneuver even more dangerous for catfish than for orcas, who nab seal pups on the beach at Patagonia’s Valdes Peninsula, before catching waves back into the ocean. “Killer whales breathe oxygen from the air,” he notes. “Catfish need oxygen from the water. So it’s more dangerous for catfish because if they stay [on land] too long, it can be fatal.”

Santoul co-authored and published a paper in the science journal PLOS-One in 2012 called “Freshwater Killer Whales: Beaching Behavior of an Alien Fish to Hunt Land Birds.” In 24 surveys, researchers observed one to nine wels swimming near a gravel bar where pigeons gathered. They filmed 54 beaching attacks, noting that in 40 percent of those attacks, the fish drove more than half their body onto land. In one case, a wels catfish beached its entire body. That attack was unsuccessful, but Santoul found that 28 percent of attacks ended in success—a kill rate similar to that of terrestrial predators.

Close examination of the footage suggests the catfish use their barbels—the whisker-like appendages of muscle and nerves near their mouths—to detect their prey. Pigeons that did not move were not attacked, even when the catfish were only inches away. For that reason, bigger flocks of pigeons seem to increase the wels’ chance of success.

“When there are only one or two birds, it’s really difficult for the catfish,” he says. “When there are 20 or 30,  it can be really dangerous for the pigeons, because there is competition among them to get to the water.” While the pigeons crowd each other to reach the best drinking and bathing spots, the fish are more tactical.

“In some places, you can observe up to five or six fish in the same place, and there is a kind of strategy interaction,” Santoul says. “The base position is for the biggest catfish of the group, while the younger fish are close by waiting. When the bigger fish catches a pigeon, a younger fish takes its place. It certainly seems they are learning these behaviors step by step.”

The researchers gathered further data on wels catfish by taking fin clips from fish caught by anglers and muscle samples collected by scuba divers wielding spearguns equipped with biopsy-tipped spears. Using a technique called stable isotope analysis, researchers were able to determine how much of each fish’s diet consisted of pigeon. They found that for some wels, 50 to 60 percent of their diets came from the birds, while others didn’t feed on them at all.

“You have to imagine that sometimes they stay in one spot, waiting, for 10 hours, and there are no pigeons,” Santoul explains. That they use the tactic despite the energy required to constantly fight the current and maintain their prime hunting spots says something about the payoff. “I remember one morning, the same catfish caught three pigeons.”

Santoul observed that only catfish in a certain size range—roughly 3 to 6 feet long—seemed to use the beaching tactic. No fish longer than 6 feet has been observed chasing pigeons onto land. “When and why do they decide to stop using this behavior?” wonders Santoul. “We have never seen a dead catfish on the beach. It seems they learn and understand that, perhaps, [when they get larger,] they are no longer successful or it is too risky and they stop.”

Santoul and his team were the first scientists to document this behavior. Beaching has since been observed in Italy, Spain, and other parts of France—but never in the wels’ native range in eastern Europe. Santoul initially thought that the invasive fish fed on pigeons because they were struggling to compete with larger catfish for dwindling populations of native fish, but he later abandoned the hypothesis. Instead, he says it’s simply a matter of opportunistic feeding. “They are able to forage on any kind of prey,” Santoul says. “In this case it’s pigeon, but it can also be crayfish, moray eels, or salmon. The plasticity of this species is one reason for their success invading western Europe.”

Read Next: Grizzly Bear Kills Bull Elk As It Swims Across a River

He adds that pigeons are particularly vulnerable targets. The birds have evolved to be wary of predatory raptors but seem oblivious so far to the dangers that lurk at the water’s edge. “They take care about birds, but they don’t care about what happens in the water,” Santoul says. “That makes them a good target for catfish—for the moment.”