Why Do Some Bucks Get Locked Up While Fighting? 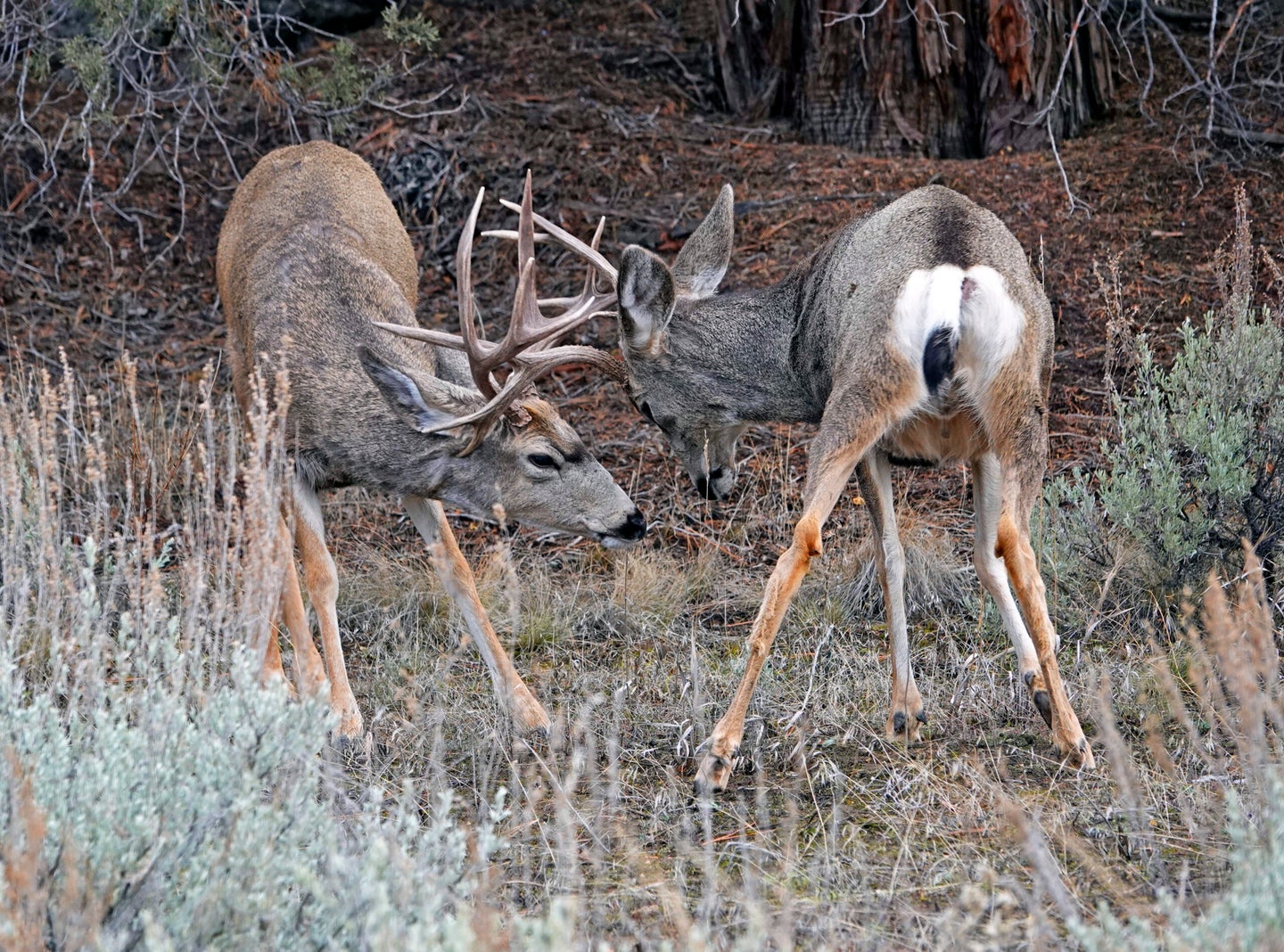 Muley and whitetail bucks are known to get locked up while fighting. Buddy Mays via Getty Images
SHARE

Bucks fight during the fall rut. It’s fun to see in the field, but it’s nothing unusual. What is unusual, however, is seeing bucks—or even elk bulls—getting their antlers completely locked together while fighting and not being able to free themselves. This year, we’ve reported on several wild instances of deer getting locked up while fighting. Intrigued by the apparent rash of locked-up bucks, we spoke with a deer expert to elucidate the phenomenon.

When Do Bucks Get Locked Up?

According to Alan Cain, Whitetail Deer Program Leader for the Texas Parks & Wildlife Department, deer can start getting locked up once they lose their velvet. But the rut is when things start to get really serious. “As bucks shed their velvet in the summer, their testosterone starts to go up. They start sparring, often to establish dominance. That’s just testing the waters, so to speak,” he says. “As you get closer to the rut, testosterone levels have peaked and the urge to breed is high. Bucks are going to spar and really fight more frequently, especially when a doe in estrous is nearby.”

Even so, Cain says that most fights don’t result in locked-up bucks, which he calls “a pretty rare occurrence.” Instead, most deer escape the encounters relatively unscathed. “Most of the time these fights—even when they’re intense—last a couple of minutes and that’s it. There’s a clear winner and loser,” he says. “But then you get some of these bucks that go at it for 4, 5, 10 minutes and longer, they can become locked up.”

What Happens When Bucks Get Locked Up?

With their antlers stuck together, Cain says there are several common outcomes. “When they lock up, sometimes they struggle for a while and break loose. Other times, they stay locked up,” he says. “After battling for a while, the bucks get tired and weak. They’re going to go downhill really quickly.”

Unless a hunter or wildlife professional intervenes, what happens next can be pretty brutal. Often one or both bucks perish. “The most likely scenario is deer die from exhaustion and not being able to forage,” he says. “It could also be that one of them gets gored while fighting. It also depends on the area, but in places like south Texas where we have a healthy coyote population, predation could be the primary mortality source…I’ve seen bucks locked up and seen coyotes around them attack one or both bucks. You’ll see the hindquarters eaten out of the bucks.”

Even so, Cain says the instances of bucks getting locked up is rare. To his knowledge, there haven’t been any scientific studies about the level of mortality caused by the phenomenon, though it surely pales in comparison to factors like predation, hunter-harvest, and starvation. “The urge to fight is an innate biological response,” explains Cain. “At the end of the day, there’s not many occurrences where you have deer that lock up, though the internet can make it seem like it’s everywhere.”

Which Bucks Are Most Likely to Get Locked Up?

It’s possible for most male ungulates, including mule and whitetail deer, to get locked up. Cain says that most deer that get locked up in the U.S. are likely whitetail deer, just because their overall population is so high. There aren’t any studies breaking down the prevalence of the occurrence based on species.

“The larger the deer’s antlers, especially if they’ve got long beams or lots of abnormal points, the higher probability of getting locked up. There are just more places for those antlers to come in contact with each other. The most common occurrence I see is when a beam gets caught behind one of the other bucks’ beams.”

What Should You Do if You Come Across Locked-Up Bucks?

Each fall, there are stories of people rescuing one or two deer that have gotten locked up by sawing or prying apart their antlers. That said, Cain emphasizes the importance of exercising caution in these situations. “The best course of action to take if you come across locked-up bucks is to leave them alone and let nature take its course,” he says. “I wouldn’t want people to go up and try to get the deer untangled or cut an antler because you’re liable to get hurt.”