Four Ways to Cook Perfect Game and Fish Over a Flame

Few elements of the outdoors are so naturally paired. Here are four delicious ways to cook game and fish, using... 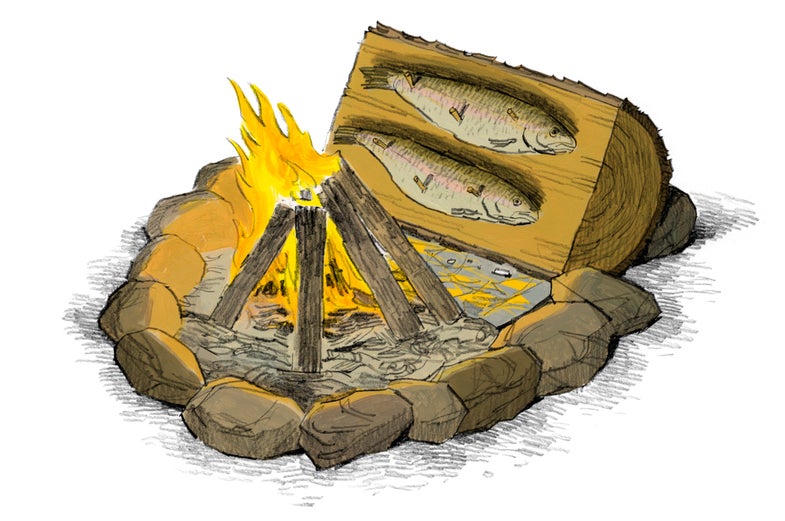 Few elements of the outdoors are so naturally paired. Here are four delicious ways to cook game and fish, using little more than what Mother Nature provides.

1. VENISON STEAKS ON A ROCK

Don’t bother with the weight of a fry pan. Instead, grease a flat rock with oil and slap on some whitetail medallions

Before there were porcelain-coated grill grates, ceramic infrared bottom burners, and electronic ignition, there were ­smoking-​​hot rocks with hunks of wild game on them. Cooking medallions of ­venison backstrap (a.k.a. loin) on hot slabs of once-­molten earth is still an outstanding way to channel your erstwhile Cro-Magnon without ignoring your postmodern foodie affectations.

Start by building a hot fire to produce a deep bed of coals. While the wood is cooking, find a flat rock that’s less than 2 inches thick. Avoid delicate shales and sandstones, and stay away from stream rocks; saturated rocks can explode in a fire. Wash the rock surface and place it at the edge of the coals for 15 minutes to preheat; heating it gradually will lessen the chances of it cracking and splitting. Move the rock to a shallow nest scooped into the coals (1).

Once the rock is hot enough that a drop of water sizzles and vaporizes, brush on a film of flavored olive oil, such as chipotle, then add backstrap medallions and 1⁄4-inch-thick slices of onion. Season with cracked black pepper. Cook the venison and onions for 2 to 3 minutes. Using tongs, remove them to a plate. Turn the rock over, brush away the ashes, and drizzle with more flavored olive oil. Place the medallions and onions on the fresh, hot surface (2), cooked side up, and top each medallion with an oil-packed sun-dried tomato. Cook another 2 minutes. Stack an onion slice on the meat and sun-dried tomato, and dig in.

Tip: Slice your backstrap evenly into 1⁄2- to 3⁄4-inch medallions (so they cook at the same rate), and pat the meat dry before heating to guarantee a good sear.

After you’ve downed a bird, find a sturdy stick, build a strong tepee fire, and cook

My hunting partners and I watched in amazement as our Athabascan Chipewyan guide cooked a whole duck on a stick. The bird self-basted in its own dripping fat, which scorched in the fire and sent seasoning plumes of smoke around the meat. It is not required that you wear a moosehide hat sewn by your mother while cooking a duck this way, but it doesn’t hurt.

Butterfly the duck through the breast, not the back. To do this, insert a stout knife—my guide brought to bear an ancient 8-inch Old Hickory blade—along one side of the breastbone keel, cutting all the way to the backbone (1).

Loosen up the bones and flesh by working the duck back and forth between your hands, like trying to break a stick. Place on a flat surface and press with the palm of your hand (2). Skewer the duck by running the stick in and out of the breast meat on one side of the keel, and then on the other.

Anchor the stick in the ground at a 45-degree angle to the fire, 6 inches to a foot away from the heat source. Cook breast side to the fire first, and rotate once (3). Grunting seems to be useful when trying to figure out when to remove the duck from the fire. Cooking time: About 20 minutes.

Tip: While you prep the duck, have your buddy gather wood for the tepee fire.

Grab your ax and Split a log. Then, get ready for the best fish dinner of your life

The modern variant of planked fish involves a store-bought cedar board and a ­stainless-steel backyard grill. It wasn’t always so. Last year on a kayak camping expedition along the Alaska coast, I came as close as a man can get to traditional planked salmon: freshly caught silvers laid by a fire on chunks of cedar ripped from a storm-­tossed driftwood log.

You don’t have to go quite as epic to experience a memorable meal of planked fish. Freshly caught local trout and panfish are small and thin enough to cook quickly, white enough to soak in the flavors of smoke, and fatty enough to stay moist in the heat of an open flame. Best of all you don’t even need a carefully squared plank of wood.

First, split an 18- to 24-inch-long, 8- to 12-​inch-diameter log in half. (Cedar is a good wood choice; stay away from pine, however, as its resin is too pungent.) Whittle a dozen or so 2-inch wooden pegs, making one end of each sharp. Lightly oil the flat surface of the log round and lay out the whole fish (scaled and gutted) or the ­fillets skin-side down (1). With the point of a knife, poke through the fish to mark the log where the pegs should be, remove the fish, then drill starter holes for the pegs. Replace the fish and tap the pegs into place.

Season your catch with salt, pepper, and butter, or a spice rub, or insert ginger slivers and sprinkle with teriyaki sauce. Build a tepee fire so the flames will rise at least to the level of the fish. Position the log round beside the fire, using rocks for support (2). Roll out a strip of aluminum foil in front of the log to reflect heat and aid cooking, but also to catch pieces of fish that might slip off the pegs—where you can snatch them up for a quick snack. Cooking time: 10 to 15 minutes, or until the meat flakes.

Tip: If you plan to cook fillets, place them on the log skin-side down. Large fish should be planked vertically.

Just when you think rabbit can’t be better, we stuff it with figs and wrap it in bacon

The idea of roasting whole small game on a horizontal campfire rotisserie is as classic as a Fred Flintstone cartoon, and about as easy to pull off as throwing an atlatl. The inconsistent diameter of a rabbit on a skewer makes it easy to turn the loins into asphalt while trying to get the legs cooked. The trick is to stuff the rabbit with a moist fruit (in this recipe, figs) mixture that pairs well with the mild white meat, wrap it with bacon to keep it from drying out, and forget about rotating the horizontal skewer with a constant motion. Instead, use this ingenious trick to lock the rotisserie in place for minutes at a time.

First, stir together a dozen fresh figs, a teaspoon of dried thyme, and 2 tablespoons of olive oil (try one flavored with wild mushroom and sage). Stuff the body cavity with the fig-and-herb mixture, then tie it up with three to four wraps of kitchen twine (1).

Now run the skewer through the rear cavity along the inside of the backbone and out through the neck. Make a rotisserie of forked sticks on opposite sides of a fire or a stack of hot briquettes, and place the skewer in the forks (3).

Roast the rabbit about 10 minutes, rotate 180 degrees, then lock the skewer in place with shoelace bows of kitchen twine tied tightly around the forked sticks. Cook for another 10 minutes. Next, rotate 90 degrees and cook for 7 to 8 minutes, then rotate 180 degrees and cook for another 7 to 8 minutes. The rabbit is ready when a kitchen thermometer inserted into the fat part of the hind leg reaches 160 degrees, or when you just can’t resist the smell of bacon, figs, and rabbit any longer.

Tip: Aside from the obvious advantage (the flavor!), wrapping the rabbit with bacon keeps the meat from drying out.