Our 10 Favorite Customized Zippos for Hunters and Fishermen 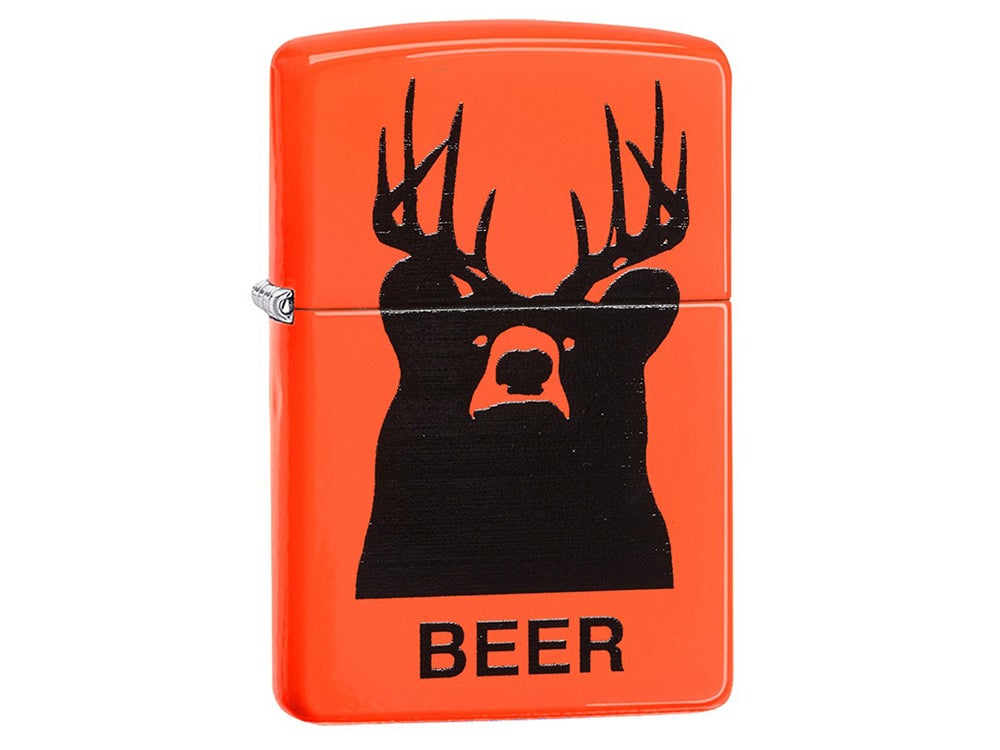 The Zippo lighter is an American icon. It was born in the shadow of the Great Depression. It’s passed around by soldiers in World War II, the Korean War, and Vietnam. Concertgoers have brandished the lighters at venues worldwide, hoping for “one more song!” And outdoorsmen have used Zippos at hunting and fishing camps across the U.S. Named after the famous “zip” sound it makes upon igniting, the Zippo’s roots run deep in Bradford, Pennsylvania, but with over 500 million lighters produced since 1933, you can find one of these flint-wheeled, wick-burning torches all over the world. While the durability, reliability, and shape of the Zippo is universal, the artwork on the lighter is what makes each one different—and what makes collecting these lighters so much fun. Not surprisingly, there are a ton of hunting- and fishing-themed Zippos available. If you’re looking for a special gift for a fellow outdoorsman, or simply a new lighter of your own, here are a handful of our favorite Zippos fashioned specifically for hunters and anglers.

Nearly every hunting camp I’ve been lucky enough to join kickstarts the celebration the night before opening day—and when that alarm clock sounds off well before sunrise, you can bet there are a handful of hunters still feeling the effects of the night before. That’s why a black bear with antlers doesn’t seem especially off to me. I’m pretty sure I’ve seen the real deal a time or two—sometimes two of them side-by-side, depending on how late the night before stretched.

There are some hunters and anglers that are simply devout to specific products and brands. Visit their homes, and you’ll see tin artwork repurposed from old advertisements, and t-shirts, hats, and other items branded with their favorite names. Remington just happens to be one of those names with a cult following. I’m not sure what the elk would score, but the typesetting on the logo is a spot match.

What better way to celebrate America’s most popular big-game animal than with a red, white, and blue silhouette of a European mounted buck?

Yes, the illustration of a snarling grizzly bear is a little over the top and cartoonish, but it might be the perfect fit for someone who guards their possessions with fervor. It just screams, “If you touch my Zippo, we’re gonna to have issues.”

While I’ve never known any waterfowl hunters who enjoy a smoke in the field, I have known dozens who enjoy a fine cigar after a hunt. If that sounds like you or one of your hunting buddies, the design on this Zippo might strike a chord.

A whitetail-themed Zippo is a great gift for the hunter in your life, but if you want to make it even more unique and personal, Zippo will add a free custom laser engraving for up to five lines.

I’ve been an angler for as long as I can remember, and I’ve never seen a largemouth leap from the water to engulf a flying red-winged blackbird—but I’m also not one to question artistic license. So I say, “To each his own.”

Just when you think Zippo has created lighters themed after every facet of the outdoors, they sneak in another unique design like this rifle target as a nod to the skills practiced by long-range shooters.

Whether you hunt big game, waterfowl, or upland birds, you have to admit there’s something mesmerizing about a sunrise. The waterfowl etching on this Zippo is a nod to that awesome moment, and just might be the most colorful scene I’ve ever spotted on a lighter—or, at least, an unlit lighter.

Last but certainly not least, I present you with what should be the traditional, designated fire-starter in any hunting camp. If someone in your clan wants to argue about how to light up the wood stove or logs in the fireplace, all you need to do is flash the face of this lighter like a police badge.