When turkeys show up at your deer stand, change tactics and go get your Thanksgiving bird 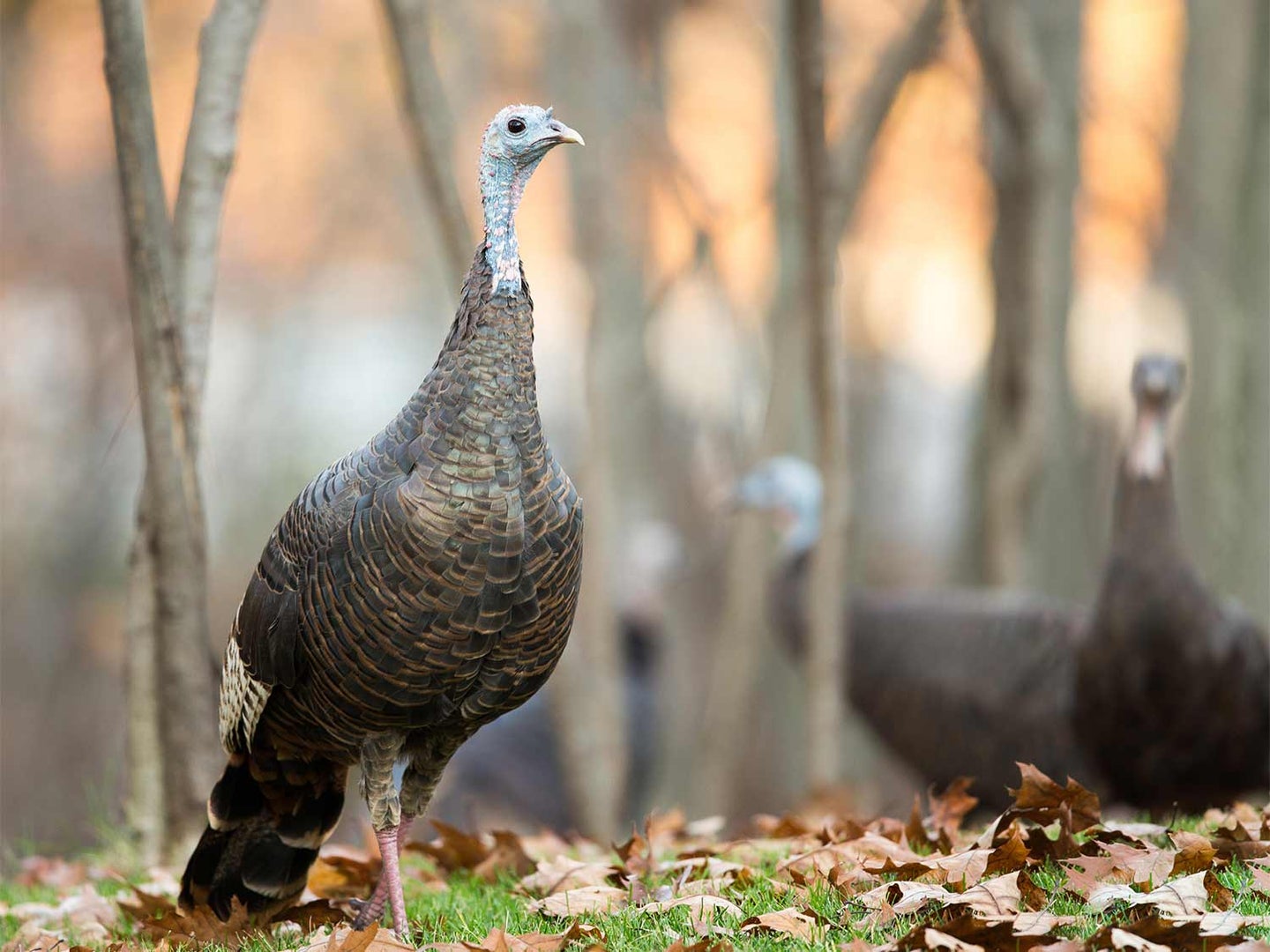 People are always saying that small-game hunting is good prep for deer hunting. Well, it can work the other way too. I can’t tell you how many times I’ve come to the end of a long, slow treestand vigil and thought, I’m coming back here to hunt squirrels.

And it works for turkeys as well.

Last night, I set up within bow range of a chestnut oak that was raining acorns onto leaf litter scattered with fresh deer poo. I love this time of year, when most of the trees have dropped their leaves, but not the oaks. It makes it so easy to find the mast trees and figure out which ones are producing those acorns that—for mysterious reasons—the deer seem to want more than others. Under the canopy of this oak, along the bank of a little creek, were firm, cap-less nuts, some half-chewed; the poo, greenish and still-wet; and two rubs, newly peeled.

It was a slow hunt, deer-wise, until the very end, when a shooter buck splashed through the creek and pushed through a screen of beech saplings to the base of the oak tree. At 20 yards, he snapped his head up and pegged me. It couldn’t have been hard; I was half-way down the tree, descending with my climbing stand. I could still see the buck pretty well, but it was after legal light, which is sunset in New York.

He blew and spun and crashed back through the creek and over the hill. I figured the spot was pretty much ruined for deer hunting for a while—but I was coming back in the morning. Just before the buck showed, I’d watched about 25 turkeys—all hens and poults—cross into the green field behind me and fly up into the leafy crown of another nearby oak.

Fall turkey and archery deer seasons overlap in most states, and a treestand is a fine place from which to spot the birds. You’re already elevated, and you’ve likely got a binocular harnessed to your chest. Plus, the early and late prime times of deer movement happen to be when you’re most likely to see turkeys too. And the earlier or later, the better. It means you’re close to the birds’ roost—and the roost is the key for deer hunters who want to fill a turkey tag.

Here’s the thing: You can hunt fall turkeys all day and all week if you want. You can pattern flocks on food or terrain, then slip into their favorite haunts and call them to you with subtle clucks and purrs. Or you can scatter the flock and pull them back in with kee-kee runs and yelps. Or you can hunt them with dogs. But if you’re a hardcore deer hunter, you’re probably not willing to trade treestand time to do any of that. What you need is a quick, simple, high-odds turkey hunt. And that’s where the roost comes in.

The ideal scenario is to watch or hear the birds fly up from your treestand. That way, you know exactly where they’ll be, and you only have to miss one morning of deer hunting. Otherwise—if you see the birds early or late enough that you can assume the roost is nearby—spend one evening glassing to pinpoint where the birds fly up, and come back to hunt them the next morning. Here the step-by-step game plan:

Watch the birds and note exactly which tree or trees they fly into, and exactly where on the ground they were standing when they flew up. Odds are, they’ll fly down right to or very near the same spot.

Give yourself at least a half hour more than what you think you need to walk in and set up. The key here is to slip in super-close to the roost. You want it to be full-dark when you do, and you want to be able to take your time and be as quiet as possible.

If possible, set up within gun range of the spot where the birds flew up. Otherwise, get as close as you can without bumping the roosted birds. You might be surprised by how close you can get. I’ve found that if it’s dark and I go slow and crawl the last 10 or 20 yards, I can usually get within 50 yards of the roost, and sometimes closer.

4. Keep Quiet Until the Birds Fly Down

Wait. Don’t make a sound until the first few birds fly down. If they fly in your direction, you probably won’t have to call at all. If they don’t, go ahead and cluck or yelp softly. This can bring the other birds on the ground closer or make the ones still in the tree fly to you—or both.

If all the birds fly down out of gun range, start with clucks and soft yelps. If that pulls them closer, just keep it up. If not, switch to kee-kee runs and yelps. (See below for how to make a kee-kee run on a turkey call.) The birds are still assembling just off the roost, and the sound of a lost poult can pull a hen into range.

6. Sit Still and Wait for Your Shot

Be patient. Turkeys tend to mill and loiter around the roost in the morning. If that’s what they’re doing, stay put and call intermittently. It could still happen. Even if they do fly right to you or you call them into your lap, don’t be in too much of a hurry to shoot. Watching birds pitch down and assemble on nice fall morning is a sight to see. Enjoy it for a bit.

A Bonus Turkey for Thanksgiving

I snuck within 60 yards of the roost and within 30 yards of the spot in the green field where I’d watched the birds fly up the night before. The first three hens sailed out of the oak and landed on the opposite corner of the field, out of range. I clucked a couple times and yelped softly and the next two birds flew right to me. Then, by ones and twos, every other bird in the tree did the same. Pretty soon I had the whole flock milling around in front of me: the hens herding the poults, and the poults bobbing around, still a little clueless. Although fall poults look nearly as big as grown hens, they only weigh about half as much, and they’re especially good eating.

I watched the show for a bit and then lowered my cheek on the buttstock. There were a couple of hens at around 40 yards—a makeable shot with my 20-gauge loaded with Winchester Long Beard. But there were also several poults only a chip shot away. As I mulled it over, I remembered that my wife and I are hosting Thanksgiving this year and that the 25-pound domestic bird we always get, which barely fits in our oven, is enough for the meal but never enough for leftovers. We don’t need another turkey. That would be too much. What we need is another half-turkey. A nice, tender one. So, I picked out one of the clueless half-turkeys right in front of me and brought it home for Thanksgiving.

How to Make a Kee-Kee Run

If you’ve only hunted turkeys in the spring, you may have never learned how to make a kee-kee run on a turkey call. So, here’s what you need to know.

In the fall, poults will make a series of high-pitched whistles whenever they get separated from the flock. Hens make the call too, in order to locate and guide lost poults, and generally to assemble the flock. The rough translation is: “I’m over here, where are you?” That’s why producing the sound on a call can draw fall birds in. If you scatter a flock, you’ll hear almost nonstop kee-kees. But turkeys may do it any time the flock needs to come together, such as immediately after fly-down.

On a mouth call, the first thing you have to do it pick a call that makes it easy for you to produce a clean, high, whistle. Some people prefer an easy-blowing single or double-reed batwing call. Others like a ghost-cut call, which is designed for kee-ing. Try different cuts and reed configurations until it clicks. Once you’ve got the high note down, it’s easy: just make a run of three or four whistles in a row. Do it repeatedly, sometimes ending the run in a yelp or two. Here’s a YouTube video of my friend and World Champion turkey caller, Mitchell Johnson of Dead End Game Calls, showing how it’s done.