8 Delicious Edible Berries You Can Find in the Wild

Other than blueberries and blackberries, here some easily-identifiable berries to forage for in the woods 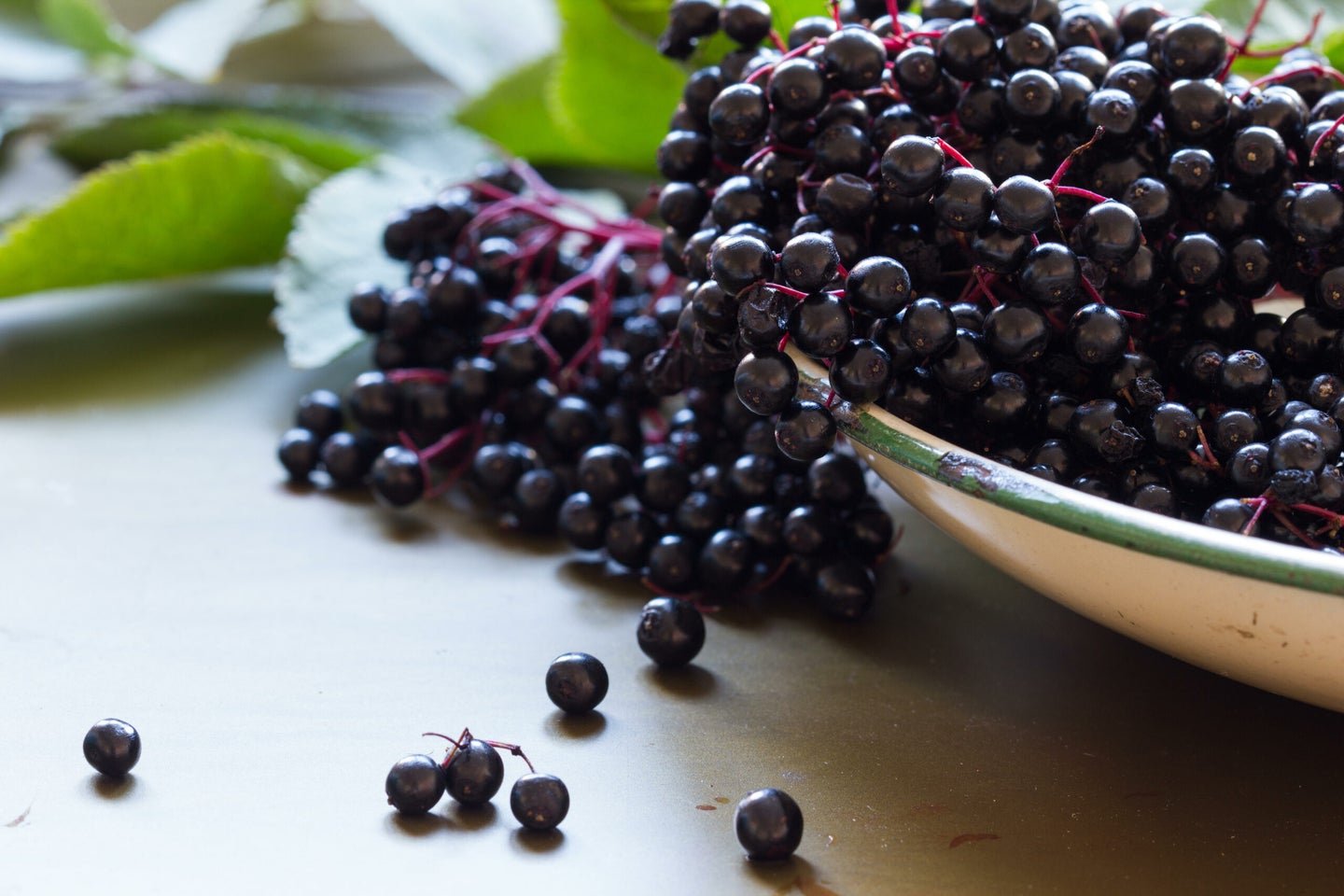 Wild berries are a great introduction to foraging. Do you know about foraging? According to the latest research, many of the fruits and vegetables available in the supermarket once grew wild and unsupervised—and people used to go out of doors to harvest and eat them. Turns out, you can still do this, and berries are an easy way to get started.

When berries are around, there tend to be lots of them, and the odds of getting sick from eating wild berries are fairly slim. That, however, doesn’t mean I don’t still have to cover my butt, so: As a general rule, avoid white, yellow, or green berries, which are more likely to be poisonous, and never eat any plant unless you can identify it with complete certainty and know when and how it’s safe to eat. Here is a list of berries that are harmful or poisonous:

With that out of the way, below is a list of eight delicious wild berries. I’ve left blackberries, raspberries, and blueberries off the list, assuming you already know about those. If not, you can get them at the supermarket.

This edible was invented by Elton John in 1972 for the song, “Elderberry Wine.” Prior to that, it did not exist. Actually, it did, as a shrub 3 to 13 feet tall with showy white flower clusters. Thing is, many people ignore it because the raw berries are often too rank and tart for direct consumption. But it’s quite versatile in other ways. The large white flower clusters, dipped in batter and fried, make superior fritters. When the berries are dried in the sun, they lose their bitterness and store well. They can also be reconstituted in boiling water for use in muffins and pie fillings. The juice is combined with that of other fruits to make jelly. It is found in damp, rich soil such as streambanks and roadside ditches from Manitoba to Nova Scotia and as far south as Texas and Georgia. Like most wild berries, elderberries are nutritionally dense, full of vitamins C and B6. The plant has a long history of use in medicine as an immune system booster.

Warning: Do not eat the unripe fruit, stems, leaves, or roots, which can cause vomiting and nausea, both of which are said to be unpleasant.

“Huckleberry” refers to a wide variety of plants. There is a lot of confusion about this. For example, huckleberry and blueberry are not of the same genus. But foraging expert Samuel Thayer makes a convincing case for how Vaccinium (huckleberry) and Gaylussacia (blueberry) have nevertheless long been treated as a single type of berry in this country. This explains why you find mentions of huckleberry in the folklore of the Deep South, where true Vaccinum is not found.

On the other hand, you might not want to tell a Westerner that his beloved mountain huckleberry is just a sour blueberry. As a shrub, the plants may be low or high. They frequently grow beneath taller trees in forests, bogs, and lake basins. Farther north, blueberries are found above the Arctic Circle. Regardless of genus, they are among our most sought-after wild fruits. You already know how to “prepare” blueberries and huckleberries. Eat them, put them in pancakes and muffins, dry them, make them into syrup or jam. Generally, they have the highest level of antioxidants of almost anything you can eat.

Numerous species growing on low, erect, or sprawling shrubs 3 to 6 feet tall with maple-like leaves and five-petaled flowers. The flowers vary from greenish-white to purple, giving way to nearly round, juicy, many-seeded fruit, which may be yellow, red and purple, or black in color. The fruit is found between June and September. Different species are found in different habitats, which range from openings in the woods and fields to swamps to rocky areas. Gooseberries and currants vary in flavor, too, from tart to sweet. Generally, sweet is preferred. The fruit is eaten fresh or dried and used in pies, jams, syrups, and wines. Like just about all wild berries, they’re a nutritional powerhouse and contain antioxidants and other chemicals which have been shown to have health benefits and anti-cancer properties. I just wish it grew hair.

Read Next: Wild Foods To Help You Stock The Pantry

A slender, patch-forming understory tree often found along waterways or well-drained, fertile bottomlands and hilly uplands. Pawpaw is native to 26 states, from Iowa to New Jersey and Texas to Florida. Your first pawpaw will blow your mind, not just because it’s the biggest indigenous edible fruit in the U.S. but because it tastes so darn tropical. The taste has been compared to mango, banana, and papaya. You’ve never had anything quite like it. The trees tend to grow in stands, and the fruit is often harvested by gently shaking the slender trunk in late summer when the fruit ripens. Pawpaws may weigh over a pound and are shaped like big green kidneys. The skin of the fruit changes from green to dark yellow as they ripen, but if you wait for them to be fully ripe, the critters will get them before you do. Let them ripen at home for a couple of days if needed. The flesh is yellow, creamy, and delicious. It also contains a good number of flat brown seeds, which are easy to spit out.

According to the Dayton Daily News, “Chilled pawpaw was a favorite dessert of George Washington.” Thomas Jefferson planted the tree. Lewis and Clark at times subsisted on them in their journey. There were plans to market the fruit commercially, but the thing about pawpaw is that it doesn’t travel. It bruises easily, spoils easily, and does not freeze well. In my experience, it doesn’t bake well, although many guides extol cooked pawpaw and its use in breads and cakes. Foxes, possums, coons, and squirrels are big fans, so you have to hustle. I eat them right where they fall and take a few home to eat in the next couple of days. To me, they’re a sacrament of late summer, just before archery deer season opens. Consider yourself blessed when you find them because the trees are highly weather-dependent and can’t be counted on to produce.

Not chokecherry, although many people persist in calling it that. And chokeberry is a terrible name for a fruit—not that chokecherry isn’t—because chokeberries are quite versatile. Nonetheless, the raw berries are quite astringent, even if nearly all edible plant guides say that they can be eaten “like blueberries.” I’d advise against this. Chokeberry is a medium-sized shrub, native to eastern North America, that rarely exceeds 7 feet. Berries ripen in the fall, and the larger ones tend to be sweeter than the smaller ones. “Sweet” being a relative term, of course. The best thing to do with chokeberry is to juice the berries, which makes them more palatable. Aronia (the genus name) juice is often sold as such in health food stores, as studies have shown the juice to help prevent cancer and improve cardiovascular health and liver damage, among others. It’s a great fruit to use to make jelly or jam.

There are about 20 plants in this genus, and one or more is found throughout the country, although they tend to thrive in northern habitats and at altitude. In some places, serviceberries can be harvested from July to September, due to different species ripening at different times. Serviceberries are great because a single bush or tree often yields a lot and you can stand in one place and feed your face. Typically a clump-forming big bush or small tree. Ripe berries are dark purple, sweet, juicy, and soft. When you get into a good patch, you can pick a gallon an hour. One tree sometimes yields 5 gallons of berries. If you can hold off eating them, they dry and can well. With lemon juice added to make the taste more tart, they make superb pies, jams, and jellies. I’m not entirely sure why tart fruit makes the best pies, just that it does. In recent years, serviceberry has become a prominent landscaping tree. Some of my best trees are in the parking lots of banks. Medical buildings can also be prime spots.

Muscadines (Vitis rotundifolia) are the fruit of a grapevine species native to the U.S. from Florida to Delaware and as far west as east Texas and Oklahoma. The plant is a high-climbing vine with forked tendrils. It favors thickets and wood edges. Muscadines flower in early spring, forming clusters of small greenish-yellow flowers. The berries ripen between August and October and vary in color from amber to purple to black. Young muscadine leaves are also edible, but they should be cooked in hot water until soft before adding to things like salads. The berries are said to be similar to plums, but muskier. The thick skins turn some people off and have hampered their acceptance as a commercial crop, but they are popular with homeowners. They can be eaten fresh, make an excellent juice grape, and are commonly used in jams, jellies, and preserves. The thick skins of pressed muscadine grapes—the technical term is pomace—is used in fertilizers and animal feed.

There are native and introduced species of mulberry in the U.S. The tree is extremely hardy, and branches of the tree used as stakes have been known to take root and thrive. There is probably a mulberry tree within 100 yards of you if you live in an urban environment. They do well in the wastelands of alleys, for example. The berry comes in both red (more common) and white varieties. They’ve long been cultivated throughout the Middle East, North Africa, the Indian subcontinent, and in southern Europe and were well known to the ancient Greeks. The fast-growing tree may be as tall as 70 feet and 3 feet in diameter. The fruit, shaped like a big blackberry and hanging from branches, is pink or red at first, darkening to purple when ripe. They are delicious and sweet, but you never see them in stores because the fruit is soft and fragile. They most often ripen in June. The easiest way to pick mulberries in quantity is to speak a tarp beneath a tree and shake the branches. The fruit can be dried, made into jelly, or juiced and drunk. They are fantastically healthy—high in vitamins C and K, dietary fiber, riboflavin, manganese, and potassium. There is also a white mulberry, which is said to be even sweeter than the red variety. Personally, I can’t tell the difference with my eyes closed.