Last month during ICAST I got two days to fish for permit, a popular saltwater game fish that you mostly... 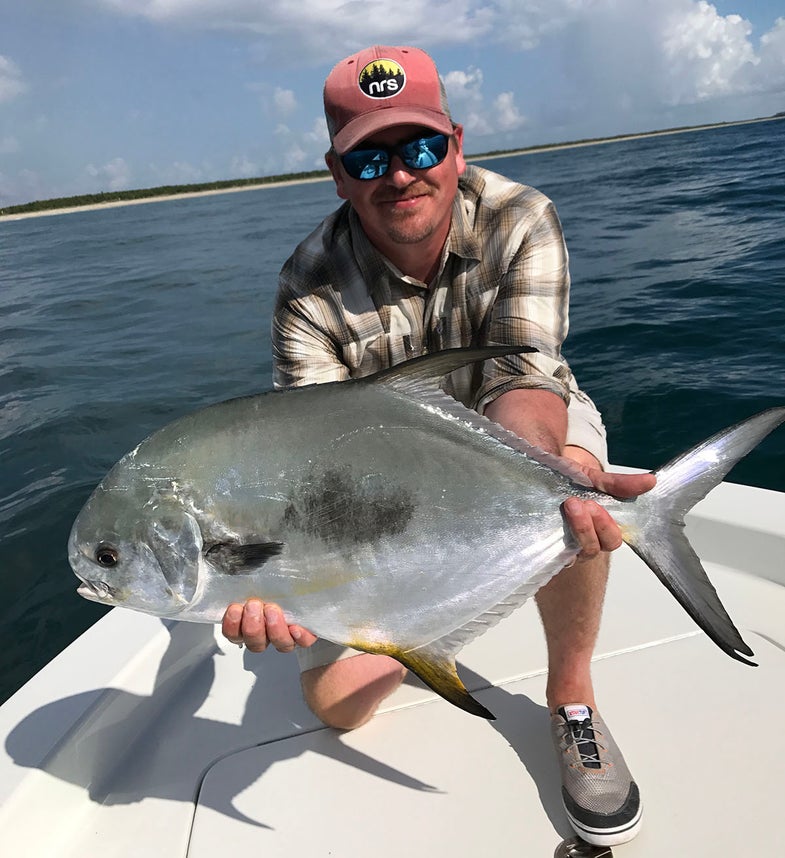 Pieces of Eight: The permit bite out of Fort Pierce is best from late spring through early October.. Eric Jackson
SHARE

Last month during ICAST I got two days to fish for permit, a popular saltwater game fish that you mostly see in fly fishing magazines. We were fishing with Carter Andrews, who hosts a TV show on the Outdoor Channel. ICAST this year was in Orlando, Florida, so we fished out of Fort Pierce, a two-hour drive southeast on the Atlantic side of the peninsula.

Permit grow to four feet long, weigh up to 50 pounds, and can live more than 30 years. The fly guys get them on the flats, but they school up along reefs as well. They are shallow water fish, fast and spooky and not very easy to catch.

Carter Andrews was lead guide on this adventure. He’s from Jackson, Wyoming, a big man with a big personality, plus long hair, flat feet, and a permanent raccoon tan. He was leading two industry fishing trips, one day for Nissan, the next for YETI, and had wrangled a group of local captains to help take us out and catch something.

Andrews spends his winters in Panama, guiding big-water trips for black and blue marlin and managing a fleet of pacific big-game boats. He was recently profiled by YETI in the following film.

Our guide’s name on day one was Brian Williamson, who owns Vero Tackle and Marina and has been fishing the area for more than 30 years. His permit technique was to fish small crabs on light tackle, pinching off their claws and hooking them through the horn on the lightest jigs you could stay in contact with in the swirling currents at the spot we were fishing, a well-known bait magnet south of the Fort Pierce Inlet where the bite is good year round.

These currents create boils on the surface, lenses of smooth water that magnify any fish beneath the surface. Schools of spadefish were hovering on their edges, flocks of rays flew past, and occasional sharks and barracudas would slide through the middle of a boil. You could get good shots at lots of different species at this spot, Brian told us. Big jacks, kingfish, cobia, even sometimes sailfish. One guy fishing in the boat next to us caught a giant African Pompano, something most guides there hadn’t seen in 20 years.

Permit eat light but pull hard, with flat, deep bodies that give them plenty of leverage in current. They’ll scream your drag with a long run, plane out to hold ground, then scream it again with another. They’re not an easy fish to whip on light tackle.

This made the sharks a problem, mostly blacktips and spinners, along with one huge goliath grouper that started stalking our boat. Fight too long and something big was going to notice. “If you think there’s something chasing him, open the bail and let him run,” Williamson told us. “Give him a chance to get out of there.” Feeding a predator permit is like baiting bear with prime rib. “If I lose one or two fish to goliaths or sharks, usually I’m going to stop fishing for that species, or change location and see if I can find some other fish. It just really kind of makes no sense to hurt the fish stocks that way.”

The largest permit I saw caught was pushing three feet long, a giant silver dollar with a yellow belly, a blue back, and a black splash of ink behind its pectoral fin. The largest I saw hooked was even bigger. We had it at the boat and had just readied the net when a 300-pound bull shark appeared like a ghost out of nowhere. It lunged at the fish and ate it in one bite, right at the rail.

It being ICAST, both days were sponsored events, timed to when all the fishing writers and video crews gather to cover the convention. Nissan took us out on the first day (Steve Parrett, who runs their PR team, was the guy who caught the African Pompano).

The new Nissan Titan HD just launched this summer. Nissan makes its trucks in Tennessee and has designed them to appeal to people in the outdoors market, aiming squarely at RAM with a Cummins diesel model and emphasis on tow performance. Standard features on their 1500 series include sway bars and an overbuilt transmission designed for 3500 series vehicles.