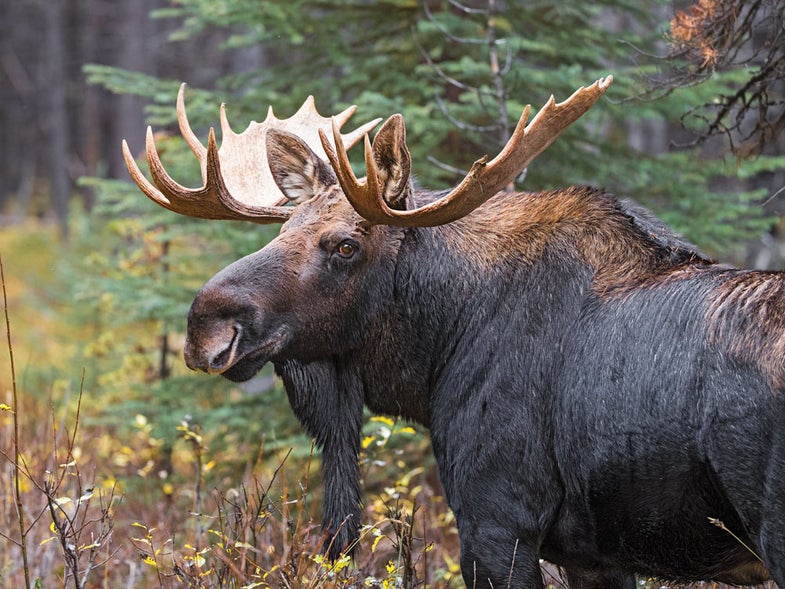 Devin McInnis wanted to drive his Jeep across the icy beaver pond. “It’s 2 miles up that trail on the other side to the cutover where I think the moose are,” he said. But it was 30 miles in the other direction to the nearest help—his mother’s house. I envisioned bubbles as the Jeep’s roof was engulfed in the brown-water abyss.

“I’m good with parking here and walking, buddy,” I said.

We’d seen plenty of tracks here the day before, but the ones we’d cut in the last 45 minutes of light were sharply defined and punctuated by black spatter from the mud underneath the snow; McInnis and I knew the moose that made them wasn’t far off. “The rut’s over, but we still might get a bull to check out a call,” he said. We followed the tracks a couple hundred yards into the timber, and I stood next to a tree with my rifle while McInnis made a long estrous-cow call: Mmmwwaaaahhhh.

I wanted to hear a branch break, to see something black and massive lumber out of the bush. But the North Woods were just silent, still, and cold. McInnis was undeterred. “We need to be here at daylight tomorrow,” he said. “I bet he’s in that cutover.”

Northwest Alberta is bleak and beautiful—a place where wolves and bears and beavers live alongside tough Canucks like McInnis. The countryside is a mix of dark Canadian bush and rolling cropfields, and it’s teeming with whitetails, mule deer, elk, and Canada moose—including some good bulls.

Getting here is an easy day of travel from about anywhere in the States, and there’s nothing really complicated about planning the hunt. But this isn’t a trip you can do yourself. Alberta requires nonresidents to hunt with a guide for big game. Moose tags aren’t over the counter, either, but since many outfitters are allotted a quota of tags each year, you don’t have to apply for a license.

Moose hunts here average $5,000 to $7,000, depending on what part of the season you hunt. Unless you’ve been pricing moose hunts lately, that doesn’t sound cheap. But if chasing a bull moose in the northern wilds is your idea of a dream hunt, I’m not sure there’s a better value to be found.

McInnis and I picked our way across the pond dam on foot. We reached the trail on the other side and immediately cut fresh tracks. “Cow and a calf,” he whispered. He lit a cigarette and watched the smoke billow and roll back into our faces. “Wind’s good.”

Ten minutes later, the two moose that made the prints erupted from the brush along the trail shoulder. They weren’t visible for more than a few seconds before vanishing again into the bush, their black hides perfect camouflage in such a dark place. We continued along the trail, and the sign became more abundant—and not all of it was from cows. I noticed saplings big as my wrist broken off at chin height. McInnis said there was an intersection with another trail ahead, and he wanted to call before we got to it. We shuffled to a stop, and he scarcely had made a full cow call before we heard the crack of antler on a tree.

Without a word, we hustled forward for a clear view down the second trail. I caught a flash of antler moving through the trees to our right, and within seconds a bull moose trotted into plain view in the trail, 180 yards away. There was no time to kneel for a rest. I shouldered my rifle, dropped the crosshair on the bull’s chest, and fired. The moose wheeled around, and I fired a second shot over his back. Instead of disappearing into the trees, the bull just stopped. I took a breath, settled the crosshair, and fired a third shot that hit him in the lungs, but it wasn’t needed. The bull was already collapsing from the first bullet.

When you’re accustomed to whitetails, walking up on something the size of a moose is intimidating. You’ve seen the tracks and sign—but not until its full form is there in front of you can you grasp the size of this animal that seems ghostlike in the bush. You think to yourself, Only in a place this wild.

We walked up on the bull, and McInnis slapped me on the shoulder. “That’s a pretty good bull, eh!” he said. Then he lit a cigarette and held it in his smile.

The bull’s rack measured 42 inches, a good average for the area and outstanding to a guy who’d planned on shooting the first legal bull he saw. We took some pictures, and I quickly realized this isn’t an animal you can just move around for a better angle. As the adrenaline settled, we began discussing the beaver pond again. I assumed we’d be hauling quarters out on our backs. But McInnis had another idea: He would get his mother to help. “She’s got an Argo and a quad,” he said. “I think we can get them across the pond and right here to him. It’ll take about four hours to go get them, though.” I told him I’d stay and start skinning. With that, he turned and left.

I made the first cut on the point of the shoulder and parted the thick hide down the back of the front leg. I broke two disposable knife blades and strained a butt muscle removing that first quarter, which weighed as much as a whitetail doe. But slowly, I took the moose apart. A shoulder, then a ham. Massive ball-and-socket joints. A 5-foot backstrap. I took a break, lying flat in the snow to relieve my muscles from the stooping and straining. That’s when I noticed the ravens, circling and cawing overhead. Quiet as the North Woods seem, a kill is no secret. I got back to work.

I wedged a 10-inch log under the spine, grabbed the opposite back leg by the ankle, and started rocking to flip him over. I don’t know that I’ve ever asked any more of my muscles. I was screaming expletives when the moose finally gained enough momentum to roll. It hit with a thud, and I fell flat on my back—wheezing, dripping sweat, and caked in blood and mud. I peeled off all but a long-underwear shirt and continued cutting. As I was finishing the other front shoulder, the final quarter, I heard machines in the distance.

McInnis’s mother, Nora Huggard, a petite lady, led the way with a chain saw bungeed to the quad’s front rack. McInnis drove the amphibious Argo behind her. She walked toward me and grabbed the front leg to help. “Don’t miss the neck meat,” she said. “It’s a good roast.”

We carefully wrapped the meat in gamebags, hoisted them into the Argo’s tiny bed, and took off. McInnis hit the beaver pond at full throttle, and the load nearly swamped us. With an inch of freeboard in the rear and the front wheels kicking spray, I sprawled myself across the hood to keep the machine from sinking while McInnis got out and slogged through waist-deep water to secure the winch cable to a spruce. I worked the winch switch with one hand and the steering bar with the other. We came to a stop next to the Jeep’s tracks on the other side.

Balanced on her knees on the quad’s gas tank, Nora plowed into the pond. McInnis was screaming, “Give it hell, Ma!” and hell is precisely what she gave. The back wheels disappeared under the murky water, but the front ones spun on the surface like paddle wheels. Steam boiled off the engine when she came to a stop on the other side, but she was almost perfectly dry.

“Honey, you’re soaked,” she said to her son. He lit a cigarette, and I could tell it was a struggle for her not to get after him. She was, after all, his mother.

From me, for the help, Nora would accept nothing more than a moose roast and a hug.

It was dark by the time we returned to camp—10 hours since I had pulled the trigger. As they say about moose hunting, the work doesn’t begin until after the shot. That night, before bed, I took one last look at the quarters hanging from hooks in the side shed and admired the bull’s paddles. What a trophy. I took some aspirin, but couldn’t sleep off the day’s pain. Sometimes, I’d rather hurt than sleep.

I used a Winchester XPR Hunter Vias in .300 WSM on my moose hunt. It retails for $600, shot sub-MOA out of the box, and fed smooth as silk. It was covered in mud after our Argo adventure, but I sprayed it off with a hose at camp, oiled it a bit, and took it coyote hunting the next day.