Eight Shotgun Drills to Master in the Off-Season

This off-season, you’re going to become the best wingshot you’ve ever been. These eight shooting drills will have you knocking... 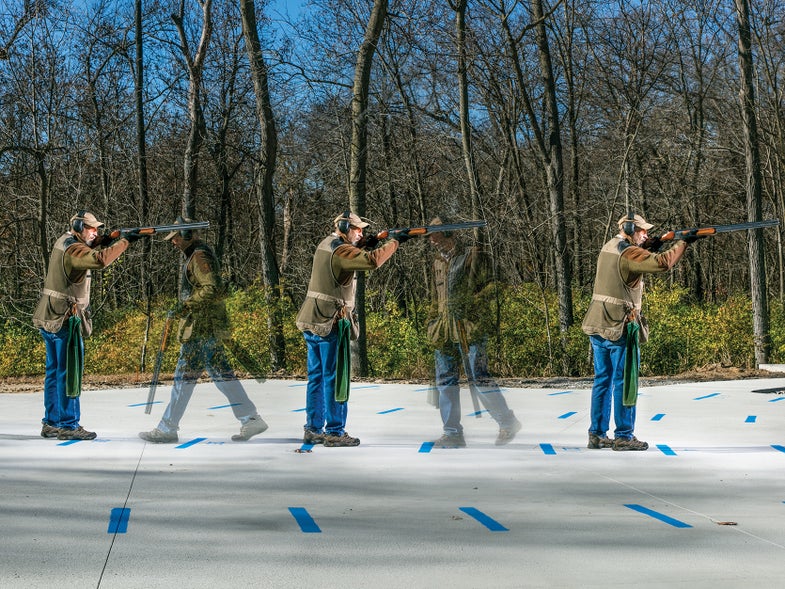 This off-season, you’re going to become the best wingshot you’ve ever been. These eight shooting drills will have you knocking down doubles come fall. Also, be sure to check out F&S’s off-season rifle drills.

Drill No. 1: Race to the Target

The Goal: Stop thinking and shoot! Taking too much time on flushing birds can cause you to measure the lead—and miss. Shooting too soon means whiffs or blown-up birds. Racing to the target helps you find your timing.

The Rundown: Stand side by side with a buddy on the 16-yard line of a trap field or behind an electric trap. Load one shell each. When you’re both ready, have the puller throw a going-away bird. Your job is simple: Shoot the target before your friend does. With your mind occupied on beating your buddy, you react to the target instead of overthinking it. After a few rounds, you’ll find that you can shoot quickly and accurately without measuring. You’ll also learn that if you rush too much, you miss. Make it a race to 10.

Drill No. 2: Close Your Eyes

The Goal: Stop trying to line the bead up with the target, which causes you to stop the gun and miss behind. This drill will help you focus on and develop a feel for the bird.

The Rundown: Mount your shotgun, call for the bird, and swing with the flying target just as you normally would. Think about moving the gun in time with the bird. Now, just before you pull the trigger, shut both eyes. The puller tells you if you hit the target. Do this 10 times, and then switch it up for another 10: Call for the target with your eyes closed. Once you hear the trap release, open them back up, get on the target, and break it. Both parts of this exercise condition your body to react to the sight of the bird, while ignoring the bead or the gun barrel.

This is a great drill to do before a round of skeet or clays through summer.

The Goal: Perfect your follow-through and make more second shots. “Staying in the gun” is target-shooter talk for keeping your head on the stock and your eye on the target all the way through the shot. Shooting broken target chips is a fun way to master this and will translate to more doubles made in the field.

The Rundown: The target can be anything you want: incoming, outgoing, crossing. You load two shells, break the bird, and then pick out a big piece of the broken target and shoot it. This makes you finish the first shot because you have to keep your eye on the bird to see it break in order to track the pieces. Do it until you can readily break the chips.

The Goal: React to a flush with a quick, perfect field mount. As you walk up to a dog on point, you need to be able to stop, set your feet, mount the gun, slide off the safety, and make a good shot—all in a second or two. This drill will make you a pro.

The Rundown: Start 10 yards behind a trap house (with the range operator’s permission) or your own electric trap. Hold your gun at port arms and begin walking toward the thrower. Meanwhile, the puller should fire the target without warning. You have to stop, mount your gun, and shoot the target. Be sure to push the muzzle of the gun toward the bird to keep the stock from hanging up on your clothes as you bring it to your face. The puller should purposely wrong-foot you on occasion, catching you when your right foot (for right-handed shooters) is forward. Do this until you can break 10×10.

Drill No. 5: Master the Crosser

The Goal: Routinely hit the most commonly missed shot. By fall, this drill will have you knocking down those doves that streak down the line of guns, and the ducks that swing along the edge of your decoy spread.

The Rundown: Go to the skeet field when you will have it to yourself and shoot the drill with the catchy name of 1-2-3-7-6-5. It’s a progressive drill that starts with the easiest crossing targets—incomers—and progresses to the tougher, longer leads.

Bonus: When you’ve got this down, focus on the long crosser by shooting station 4, and then repeatedly stepping back 10 feet (shown above) and shooting it again.

You can do a lot to hone your shotgunning skills without ever pulling the trigger. Here are three quick drills you can do anytime.