Close Call: Mauled by a Grizzly

This September, elk hunter Tom Sommer, 57, was mauled by a grizzly bear near Ennis, Mont. 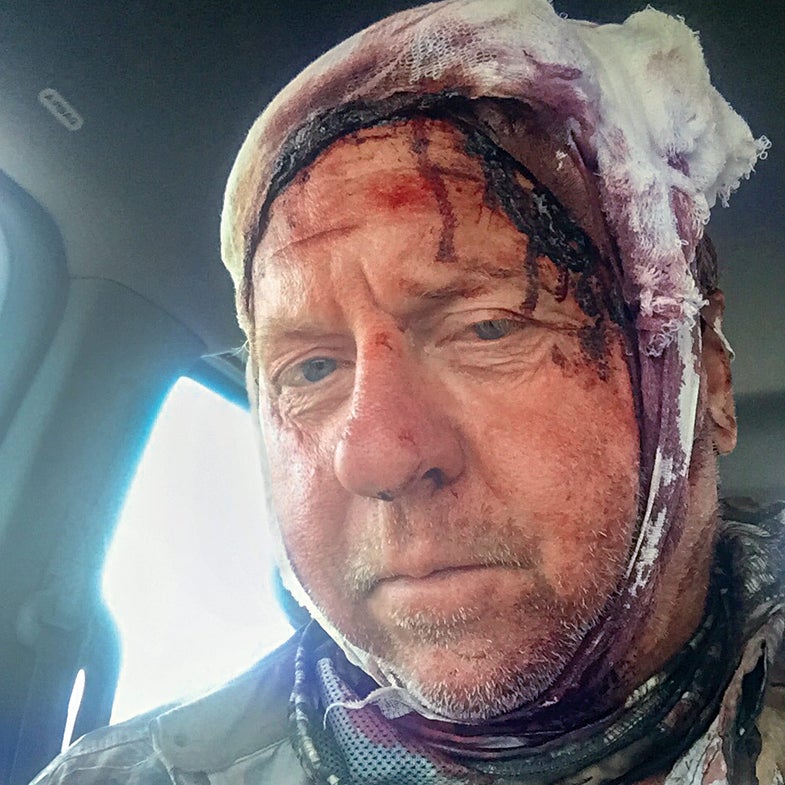 In all the years I’d hunted that area, I’d never seen grizzly tracks before. My buddy Dan and I were bowhunting back in the mountains and noticed them during the first day or two of our trip. But we didn’t think too much of it. The third morning, we left our mules at camp and walked about a mile to where we’d heard an elk bugling the day before. After a while, we decided to sneak into some really thick timber. We were maybe 2 feet apart when Dan stopped and whispered that there was a grizzly bear 20 yards away. I raised up my arms and yelled, “Hey, we’re over here!” thinking the bear would move away. Instead, it charged right at us. It jumped over piles of brush like an Olympic hurdler, and I could see its long claws as it closed the gap between us.

It’s a bluff charge, I thought. But Dan and I had both gotten our bear spray out. Dan clicked off the safety and shot a stream of spray right toward the bear. But the griz hit the edge of the stream, veered around it, and then set its sights on me. I tried to fire my bear spray, but the safety was engaged, and I didn’t have time to click it off. The bear was coming right at me. I ran around a tree twice, dodging the bear, which bought me enough time to grab my .44-caliber handgun. I turned to fire at the griz, but it was too late. He rolled me like a paper bag.

He bit my thigh and then went for my head. I could hear his teeth raking across my scalp. I thought the lights would go out any second. But I tried to get the bear off me. I couldn’t see out of my left eye because of all the blood, but my right eye was maybe 4 inches from his neck. I still had my handgun and brought it up to fire. But the bear pinned down my arm, so I couldn’t get a shot. This isn’t good, I thought. But suddenly, I felt the bear release my head and lift its chest off mine. Then it darted away. Dan had run right up to the bear while it was on top of me and sprayed it in the eye with bear spray.

My face was a mess, and for a second I was afraid that my left eye was gone, but Dan said it wasn’t. Luckily, he had blood coagulant in his pack and poured it on me. We used some cheesecloth to wrap my head and then cut off a piece of my shirt and used it to wipe my face. We knew we had to get out of there, so we headed back to camp as soon as we could. I couldn’t hike the full mile, so Dan went ahead, fetched our mules, and came back for me. We rode the 5 miles to the truck, only to find it had a dead battery. So we jumped it, then drove 50 miles to the nearest hospital. I didn’t feel any pain from the lacerations because my adrenaline was pumping so fast. The bear attacked at about 8 a.m., and it was 2 p.m. before we reached the hospital, where I got more than 90 stitches in my head.

I don’t begrudge the bear at all. He was just doing what bears do. At the end of the day, I’m happy I was attacked instead of Dan, since I was the one who alerted the bear to our presence and had been leading us through the woods. I like to think I took the hit pretty well, too, all things considered. —As told to Joe Albert