The Essential Gear for a Wall-Tent Hunting Camp

You don’t need much to set up a comfortable—and cheap—camp for a D.I.Y. western big-game hunt 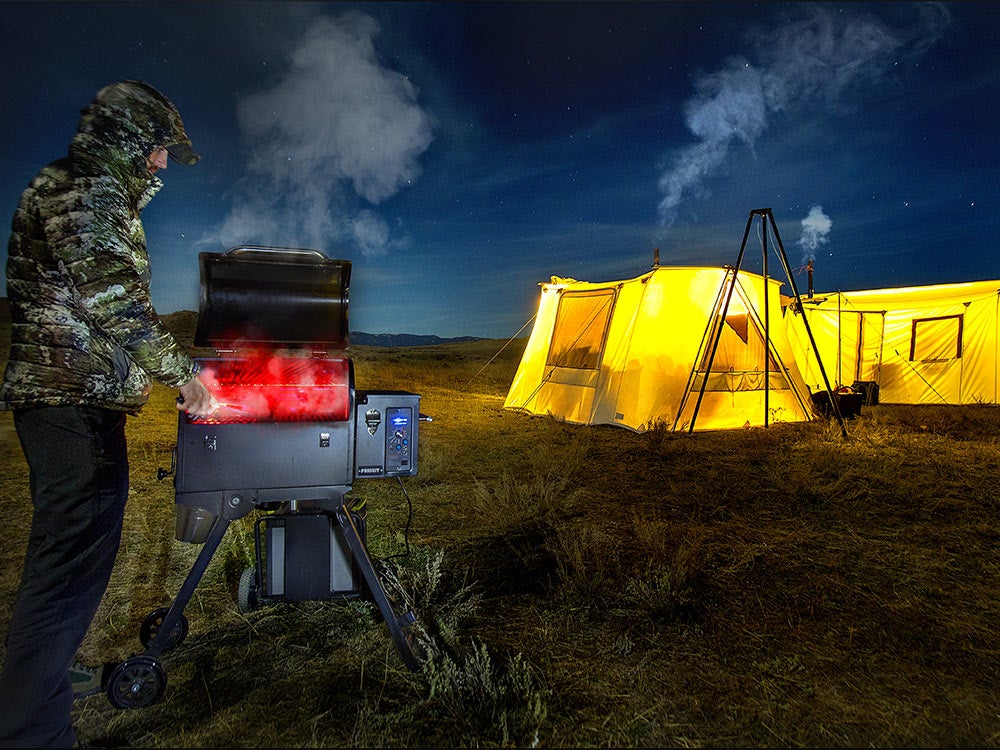 With the right gear—and a bit of know-how—you can hunt Western big game on the cheap. This past October I did exactly that, hunting pronghorn antelope, outside Kaycee, Wyoming, during rifle season. We camped near our trucks on private land, paying a little for the privilege, and had a few thousand acres all to ourselves. Seven of us had tags over two units—and seven good bucks were taken. Here’s the gear we used that helped make it such a successful hunt.

Designed in 1961, Springbar tents gained much love from Boy Scouts, car campers, and horse-pack hunters. The reason is simple: They beat the hell out of standard canvas wall tents. Springbars are easy to set up and the snow rating is high enough for a late-season elk. During my week in Wyoming, I broke one down, set it up, and broke it down again in about 15 minutes. At 74-pounds, you’re obviously not going to backpack these into country, but on a pack trip or in a car camp, they’re ideal.

We ran this stove in the early mornings and late evenings inside our mess tent. It’s 304 stainless, so it won’t rust or corrode, and the 1,500-cubic-inch firebox can swallow standard-sized 18-inch cordwood. Options include a large water tank for on-tap boiling water, and a pipe oven that I’m told cooks wicked pizza. (The top of the stove makes a great cooking surface, too.) There’s an air vent on the front, and a damper in the first section of 3.5-inch pipe. This thing cranks heat.

Camping for me usually means sleeping on a ground pad inside a backpacking tent, or on an air-mattress in the bed of my truck. So, when I got to Wyoming and found an Easy Cot setup with my name on it, I was a bit skeptical. That all said, this cot was comfortable as can be. It should be obvious that a camp cot is a vast improvement over sleeping on the ground, but what I didn’t expect was just how much better a cot is than an air mattress. Don’t believe me? Just look at the online reviews.

Unlike most traditional mummy bags, the KSB 0 from Klymit has baffles that stretch so you can bend a knee or two instead of being bound in place like King Tut. The bag also has a lock system that snugs the bag down for shorter sleepers. The full length is 6 feet 8 inches, there are inside pockets—perfect for a phone and headlamp—and the whole thing weighs a modest 3.7 pounds.

Shortly before our October hunt, Camp Chef announced a new tailgate-size pellet grill, the Pursuit. Paired with a Camp Chef Explorer 2 Burner gas stove, the little grill handled most of the cooking for our large camp. Brooks Hansen, who works for Camp Chef, ran the kitchen and turned out some killer meals—the best of which was the reverse-seared pronghorn backstrap with a berry-bourbon sauce (see video below.) The Pursuit breaks down to a small package on wheels—about the size of a roller-board bag you’d check on an airline. With more than 500 inches of cooking surface, it can feed a big group. This cooking setup was ideal for our camp.

The best meal all week at camp was this reverse-seared pronghorn backstrap with a berry-bourbon sauce.

Everyone in our camp ran Savage rifles with Bushnell optics and shot Federal ammo. The first morning out—on the first stalk of the week—I snuck around a water tank, and found myself 280 yards from a good bedded buck. My 115-grain Nosler Partition caught the outside edge of the old buck’s scapula, deflected north, hit both lungs, and exited high out the backstrap, clipping the spine. It was the first of three kills made over the week with my .25-06—everyone wanting to shoot her. Seven goats fell to Federal bullets on this trip—the remainder of which were killed with Nosler AccuBonds. At home I shot the Partitions and AccuBonds from the three-goat .25-06 off a shooting bench at 300 yards. Both printed groups a shade larger than two inches. Accuracy and quick, clean kills. What more can you ask for?

For this wide-open prairie country, we ran the 10x42s in a chest harness while stalking, with the bigger guns—Bushnell’s 15x56s—reserved for longer glassing sessions. I was taken with the big binos, which were clear as a bell, even in low-light conditions. They’re smaller in the hand and noticeably lighter than my European-made 15x56s that I normally take West—and they cost about half as much. These binos are pretty much out of stock everywhere, which should tell you something of their performance.

Temperatures on our hunt ranged from near freezing early in the mornings, to nearly 70 degrees one afternoon. Still, I hunted and hiked all day, across that temperature spectrum, in basically three layers: a cotton t-shirt, the Core Heavy Hoody from Sitka, and a down vest. Many of my buddies ding Sitka for the investment-banker price tags, and I get that, but they can’t point me to anything less expensive that works half as well. The Core Hoody is fitted and “body mapped” with strategic lofted-fleece insulation in spots that tend to shed heat. The backside of the shirt is long, too, so it stays tucked in on those cold mornings, and didn’t ride up under my pack when I untucked it on the warmer afternoons. It also has Polygiene Odor Control in the fabric, so even after five days of wearing it all day long, it didn’t stink.

I’m great at losing sunglasses. I usually find them, broken, after I’ve sat down on them. This keeps my penny-pinching self either squinting or in Foster Grants. But before my Wyoming hunt, a buddy sent me this pair of Revision sunglasses. They look cool, fit well, and have a Croakie-like retention line built right into the frame. Even I can’t lose them. Best of all, the polarized and coated glass is mil-spec shatter resistant, so they make first-rate shooting shades. They worked great on the antelope stalk, but really earned their keep after I tagged out, and settled behind an AR at the nearby prairie dog town.

How do you get a boned-out pronghorn home and fresh when you live 2,000 miles away? With this cooler. On the last night in camp, everyone chipped in to butcher and vacuum-seal the pronghorn into freezer cuts. Each goat fit perfectly inside these soft-sided OtterBox Troopers. I took mine on the plane as a carry-on. Just for kicks, I weighed it at the airline counter—48 pounds. So, I could have checked it, but instead I felt like the manliest man in Denver International, walking to my gate with a backpack full of wild meat from my first-ever pronghorn, a little pepper in my step from successful hunt.