Get Ready for the Fall’s Best Trout and Salmon Fishing 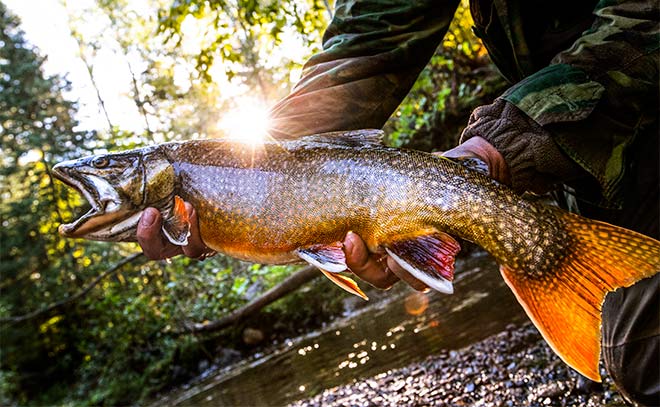 The Yellow Conehead Woolly Bugger whistles by my ear and plunks in the river on the far side of a white plume. At the end of the swing, it glides into the slack water around my feet. A crimson blur flashes toward it—a brook trout trying to chase an intruder from the eddy. But then the trout sees me and vanishes into the clear flows of Maine’s Kennebec River.

Another 15 minutes of casting and turtle-hunching in the wind. Should I switch flies? I wonder, stripping in the conehead. Suddenly, a salmon is in the air, skittering across the rapids. My line snaps through the guides. I connect the dots—bingo!

Ten minutes later, a 20-inch landlocked salmon comes to net, glittering and strong. I know the fish resulted from my fly ending up in its path almost incidentally, but the early-​­morning salmon gives me a charge nonetheless. Luck and patience are big parts of fishing the fall migration, no doubt.

During this time of year, cooling temperatures and rising water levels activate the largest brook trout, landlocked salmon, and brown trout, drawing them upstream to procreate. Since food is not the point of the journey, bright streamers, like a yellow conehead, make a good choice for brookies or salmon. Other top patterns on the Kennebec include the Montreal Whore, the White Marabou, and the Mickey Finn Marabou. A similar streamer formula holds true for brown trout, though they prefer colors and imi­tations of creatures found in nature, such as leeches, sculpins, and juvenile trout. In each case, weight matters. You want your streamer to get down there, walk into the bar, and pick a fight.

Hours later and a mile downstream, my friend Jim and I loll on a sunny ledge eating sandwiches. The shoreline glows with yellows and oranges, rendering the river violet blue in contrast. As pleasant as it is, Jim likes this spot for other reasons—among them the cartwheeling, 5-pound salmon he landed while teetering on the ledge a few years ago.

But he hasn’t forgotten about the ones that got away, either. “I wouldn’t have minded landing that big brookie I had on last year,” Jim says. “She took my conehead into her little cave and wouldn’t come out.”

Jim isn’t the only one who has lost out. Several years ago, two pools upriver, our friend Shawn tussled with a big brookie for more than 20 minutes before it snapped the tippet on a headshake. A year before that, Jim’s English buddy Charles was grinning as he played his first ever American salmon, albeit a small one, until a huge brook trout floated up and snatched it away. Landing fish can be just as hard as hooking them at this time of year, but that’s part of the appeal.

After story hour, Jim grabs his vest and rod and heads downriver. “I’ll be back so we can hike out in the light,” he says over his shoulder, “and avoid getting stomped by a moose.”

I creak to my feet and start roll casting a pair of No. 14 and 18 beadheads out along a foam line, still mulling stories of big fish landed and lost.

Over the years I’ve learned that the smallest nymphs often account for the biggest fish, especially as autumn wears on. Beadhead Princes or Hare’s Ears, weighted stoneflies and, in particular, No. 16 to 18 Pheasant Tails ­dead-​­drifted in the right place seem to offer fall spawners a quick bite without their needing to stop or chase. Sometimes on the East Outlet, I use an indicator, a yellow conehead, and a No. 18 Pheasant Tail on a 5X dropper—an odd concoction, sure. But fall is like that. Dan Legere of Maine Guide Fly Shop (maine​guide​fly​shop.com), a top regional outfitter, has floated the East Outlet some 1,500 times, and I’ve heard him say, “In the fall, it may take 10 different flies to catch 10 different fish.” After all, fall spawners don’t know what they want; food is a peripheral concern.

RELATED: The Best Plan B When Fishing Goes South

Since autumn salmon and trout stay on the move, anglers must do the same to find them. The fish end up in resting places and favor side cover, such as fallen trees and ledges. They also tend to move at low light, and this is surely the case on the river now, with the black boulders casting shadows over the flow. Roll casting along the ledge, I glance upstream and watch as Jim, 200 yards ahead, plays a fish. My yellow indicator, meanwhile, bobs through the current like an abandoned life raft.

I hike 50 yards upriver and butt-slide down to a toe-scrunching ledge overlooking a run. I balance myself and start drifting my nymph rig. Just as I lift the rod to cast again, a fish is there. It bores into the deep water beneath the ledge, pulling in slow, heavy tugs. I extend my rod to get the fish into the open river, but that’s not happening. I raise the rod tip high. But just as suddenly as the fish was on, it’s off, and the weight releases into nothing. In a sense, I follow suit, deflating, and stare at the tippet floating in front of me. With the angling season in its twilight, I won’t have many more chances at a brook trout like that. Jim and I will soon hike out for the last time until spring. The fish, meanwhile, will continue upriver, another one lost for next year’s story hour.

The modified Conehead Woolly Bugger is a surefire pattern for spawning fall trout, thanks to its weighted tungsten cone, chenille body, and marabou tail. You can tie up a Bugger sans hackle or clip the hackle off a standard Woolly Bugger in a pinch. So unencumbered, the fly zigs and zags near the bottom in provocative motions. Stick with olive, red, white, and yellow, in sizes 4 through 8. With a floating line, cast upstream and slightly across. Retrieve so the fly moves a little faster than the current and taps the rocks along the bottom. You can also fish a conehead with a strike indicator, twitching it as it floats. —W.R.

This story ran in the September 2017 issue with the headline “Fall in Line.”