First Confirmed Cougar Sighting in Lower Michigan in 100-Plus Years

This week the Michigan DNR confirmed the first mountain lion sighting in the Lower Peninsula since the big cat went... 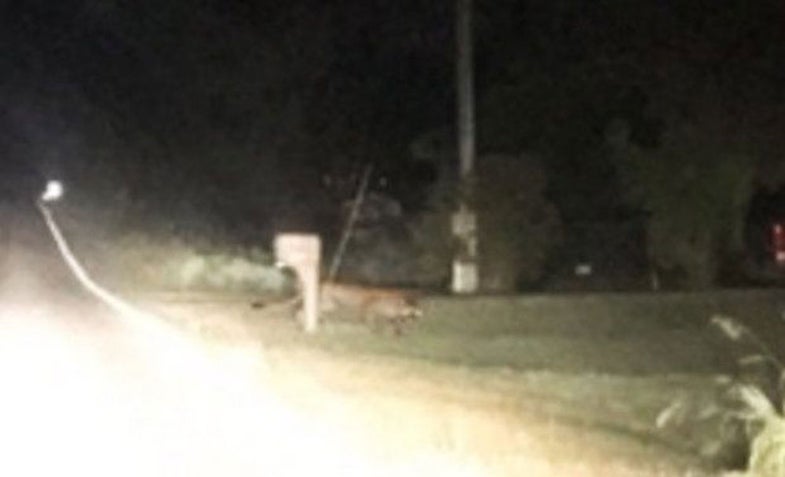 This week the Michigan DNR confirmed the first mountain lion sighting in the Lower Peninsula since the big cat went extinct from the state, around the turn of the century. On June 21, a resident of Haslett, Mich., snapped a photo of the lion near the Rose Lake State Wildlife Area, though the DNR has not released the exact location of where the picture was taken.

For decades rumors of mountain lion sightings circulated the Lower Peninsula, but until this week, none had been confirmed outside the Upper Peninsula. The new photo, seen above, shows the cougar attempting to cross a road, illuminated by the headlights of the photographer’s vehicle.

Since 2008, the DNR has confirmed 36 cougar sightings in the U.P., according to MLive.com, but officials maintain that there are no breeding populations in Michigan. According to the DNR, mountain lions went extinct from the state in the early 1900s, with the last one killed in the U.P. in 1906.

Past DNA testing revealed that mountain lions now in Michigan migrated from Western states. It is not uncommon for mountain lion populations to appear in new areas; in recent years, officials have confirmed sightings in Tennessee, Kentucky, Illinois, and Missouri, among others.

With an increasing number of sightings in the U.P., it was only a matter of time before one was confirmed in Lower Michigan. Though the big cats may be hanging around, whether they will stay in Lower Michigan remains to be seen.