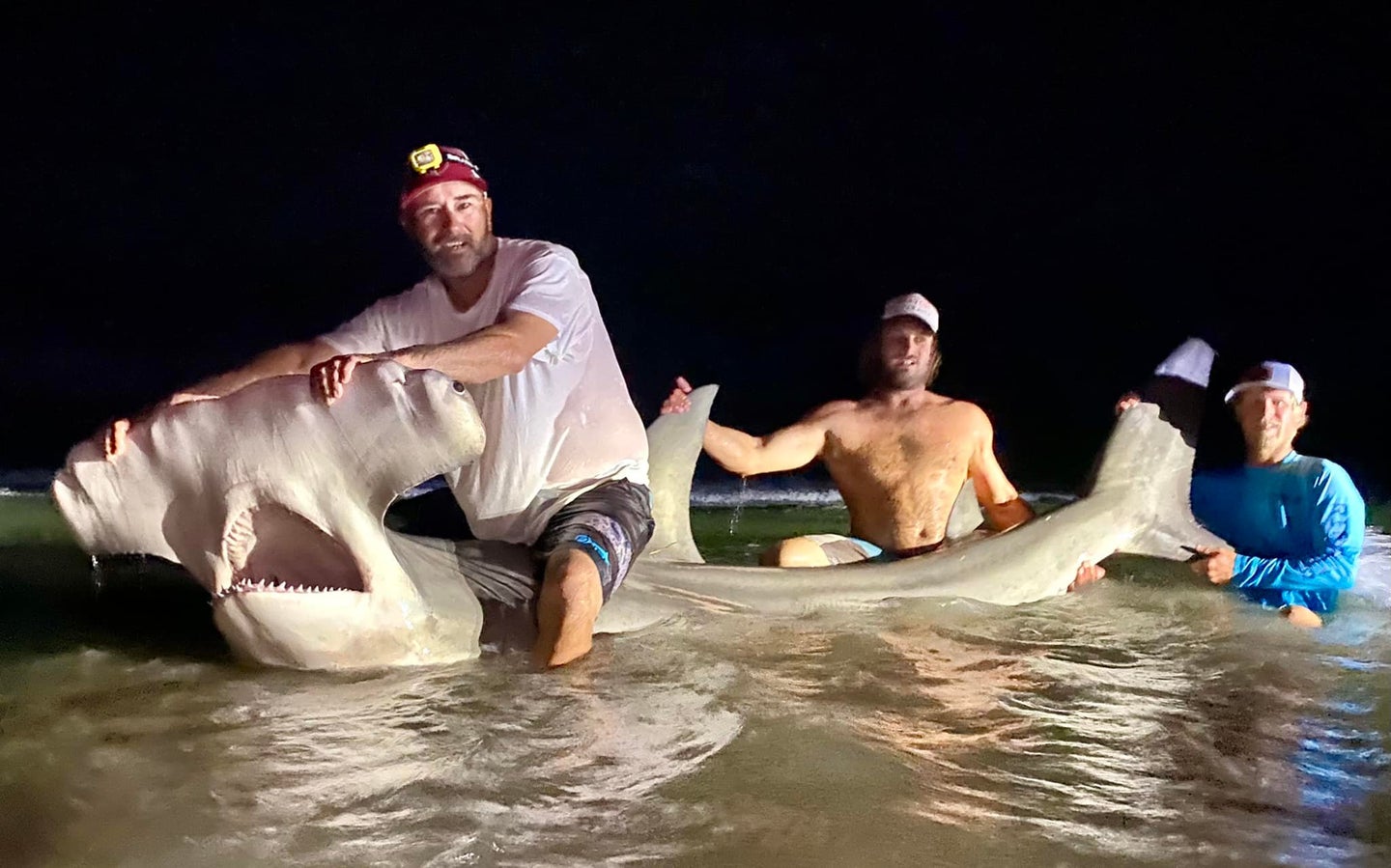 Texas shark angler Jimmy Limon was fishing a bait setup he’d dropped nearly 700 yards offshore when he hooked into the shark of a lifetime. Accompanied by a crew of three friends, Limon fought and landed a 13-foot, 3-inch hammerhead shark sometime in the night on Friday, August 26. “I had around 70+ pounds of drag right from the start,” Limon said in a Facebook post. “…this fish was foul hooked in her [pectoral] fin.”

During its initial run, Limon says the hammerhead took line far out to sea until he only had about 100 yards left on his spool. Eventually, he got the hard-fighting hammer turned around and began battling it back to his spot on the beach. And after a full hour going toe-to-toe with the shark, he finally brought the shark ashore.

It wasn’t Limon’s first time battling a massive hammerhead. “Last year I lost one of this magnitude,” he said. “When this fish took off, it was definitely scary.” Limon says he’d intended to release the hammerhead, but the battle proved too rigorous for the giant shark. “We swam with her for almost an hour with no luck bringing her back, sad to say I have never killed any shark intentionally and this was unfortunate,” Limon said.

In Texas, there are a handful of shark species that are protected and off limits for harvest, but hammerheads are considered an “allowable species” by Texas Parks & Wildlife. The daily bag limit for hammerheads is one fish per day, and any shark that’s retained must measure at least 99 inches in length. According to the comments on his Facebook post, Limon and his angling partners harvested what meat they could from his catch. In the past, Limon has participated in the Texas Shark Rodeo—an annual shark fishing tournament that asks participants to tag and collect DNA samples from the sharks they catch before releasing them back into the ocean. Data gathered during the statewide event is used in scientific studies and helps further the conservation of Texas’ native shark species, according to the tournament website.

Limon’s impressive catch is most likely a great hammerhead, the largest of all hammerhead species. The current International Game Fish Association (IGFA) world record great hammerhead was caught off the coast of Florida in 2006 by Buck Dennis. That shark weighed in at 1,280 pounds. Last fall, Field & Stream profiled another land-based shark fisherman who caught a 13.5-foot hammerhead off the coast of North Carolina. You can read more about that fish here.