Fishing with Cranor's Guide Service, Eric Underhill caught the boat-record brown in a snowstorm by bottom-bouncing a minnow rig 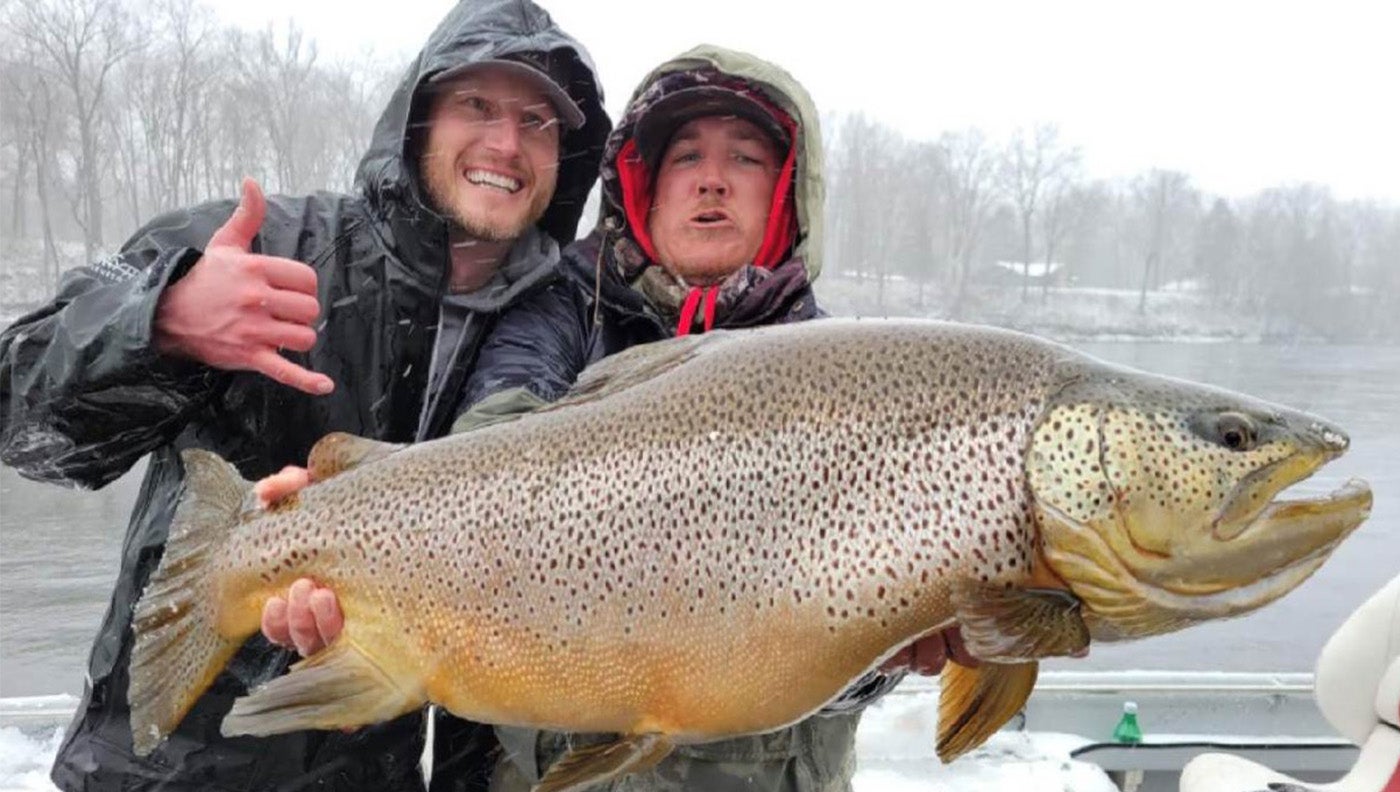 When Eric Underhill, from Colorado Spring, CO, showed up at Arkansas’ famous White River last week to fish with a colleague, his biggest trout ever was a 7-pound rainbow, which is a heck of a fish. On Friday, he beat that by a little over 18 pounds—in a snowstorm.

“I’d heard about the White and had always been intrigued by it,” says the 39-year-old angler, who was fishing with Cranor’s Guide Service. “I was hoping to get into some browns, maybe in the 3- to 5-pound range. Did I expect to catch a 25-pound brown? Never.”

But, as he found out, “never” sometimes happens. Thursday had been a beautiful day with highs in the 60s. Then a snowstorm blew in. “Friday was miserable,” Underhill says. “Bitter cold. We could barely feel our fingers. It was in the 20s, but with the wind, it felt like about 15.” He, a friend, and Cranor’s guide Craig Yowell went fishing anyway. Yowell says that the conditions were ideal, with a low and falling barometer and some of the darkest daylight skies seen all year. After having caught and released 3- and 4-pound browns, they went looking for rainbows in another part of the river before lunch, bouncing minnow rigs off the bottom of the swift river. But they got something else.

Minutes before the big brown bit, Underhill had asked Yowell about the biggest fish he or a client had ever caught. Yowell told him that in 13 years of guiding, his was a 19.1-pound brown, and the biggest a client had caught was an 18-pounder. “I said, ‘Wow, those are hogs!’” Underhill says. That’s just when he got bit and his drag started burning. Underhill looked over at Yowell and told hime he had a monster on.

The fish took off upstream with a minnow in its mouth on 25-pound braid ending in an 8-pound fluorocarbon leader. The fight lasted 10 or 15 minutes, the big brown running upstream. Underhill credits his guide’s boat-handling and netting skills for the catch. “Craig feathered that throttle just right to hold me in place, and he kept the fish from diving into the trees,” he says. “And he kept the fish in the net and the net in the water until the trout started to revive.” They weighed the fish in the net twice, subtracted the weight of the net, and realized they’d just landed a 25-pound, 8-ounce fish.
“I turn 40 soon,” says Underhill. “I think I got my midlife-crisis present early.”