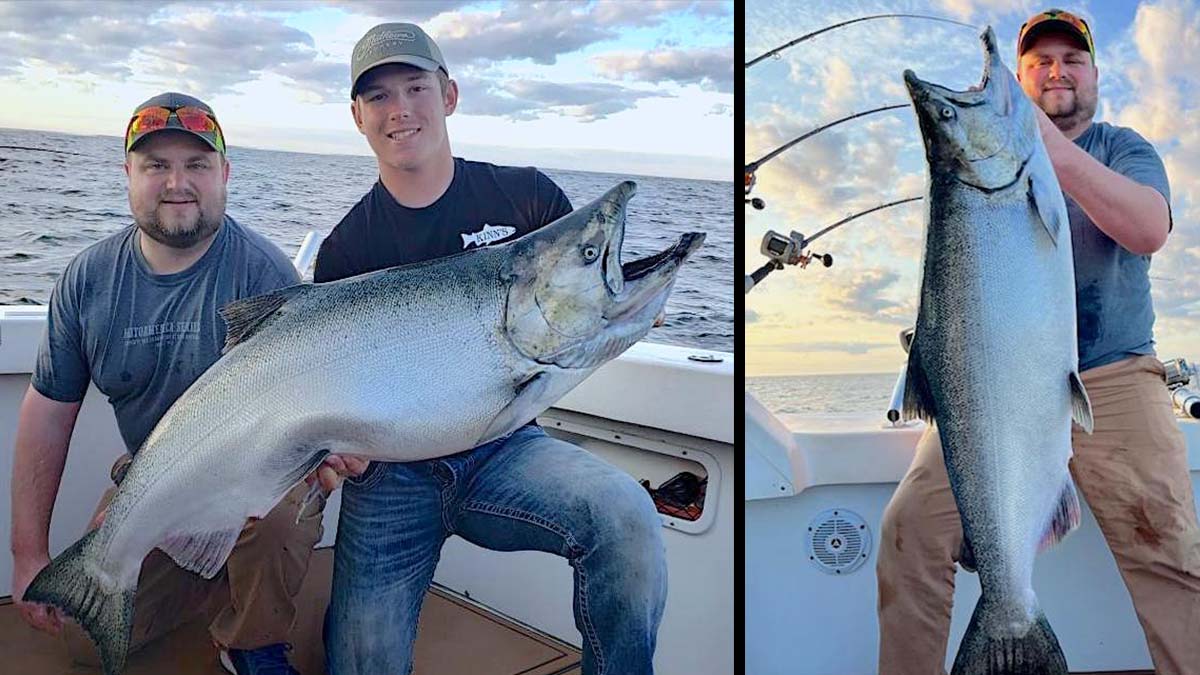 The salmon is the largest caught in Wisconsin since 1994. K/D Salmon Tournament via Facbook
SHARE

Brian Sollars, of East Bethel, Minnesota, was fishing aboard the Kinn’s Sportfishing boat “Midnight,” captained by Bill Classon, when he hooked the big salmon at 6:15 a.m. on July 31. The fish hit a Moonshine spoon trolled at about 50 feet in 160 feet of water 4 miles offshore. Sollars initially thought he’d snagged some of the canal grass that floats down from Sturgeon Bay, according to a Facebook post from K/D Salmon Tournament.

“At first I didn’t feel anything. It was just heavy, and I told Bill and Carter that it must be weeds,” Sollars said. “But then it took off on a long run.” He was able to boat the fish in 15 minutes and netted it on his first attempt.

Catching a 40-pound chinook out of Lake Michigan is an exceptional feat. Sollars’s fish is the first salmon to top the elusive 40-pound mark on a Kinn’s Sportfishing boat. The charter company has run thousands of trips since its inception in 1969. The fish is also likely the heaviest chinook out of Wisconsin waters since the 44.92-pound state record was caught near Sturgeon Bay in 1994. According to the Milwaukee Journal Sentinel, Sollars’ catch is also “the heaviest trout or salmon caught in the Wisconsin waters of Lake Michigan and weighed on a certified scale since July 12, 2010, when Roger Hellen of Franksville caught a 41.5-pound brown trout off Wind Point in Racine County.”

Sollars was enjoying only his second Lake Michigan charter trip when he caught the lunker. It was his second hook-up of the day. The first one got away during the fight, and he’d worried the giant chinook would, too. “It almost spooled us,” Sollars told Door County Pulse. “I was hoping the fish would stop running at some point, and it did, and I was able to make some progress.”

Chinooks, also known as king salmon, have been stocked in Lake Michigan by the Wisconsin Department of Natural Resources and other state agencies since the 1960s. The lake record is a 47.86-pounder caught on August 7, 2021, near Ludington, Michigan.