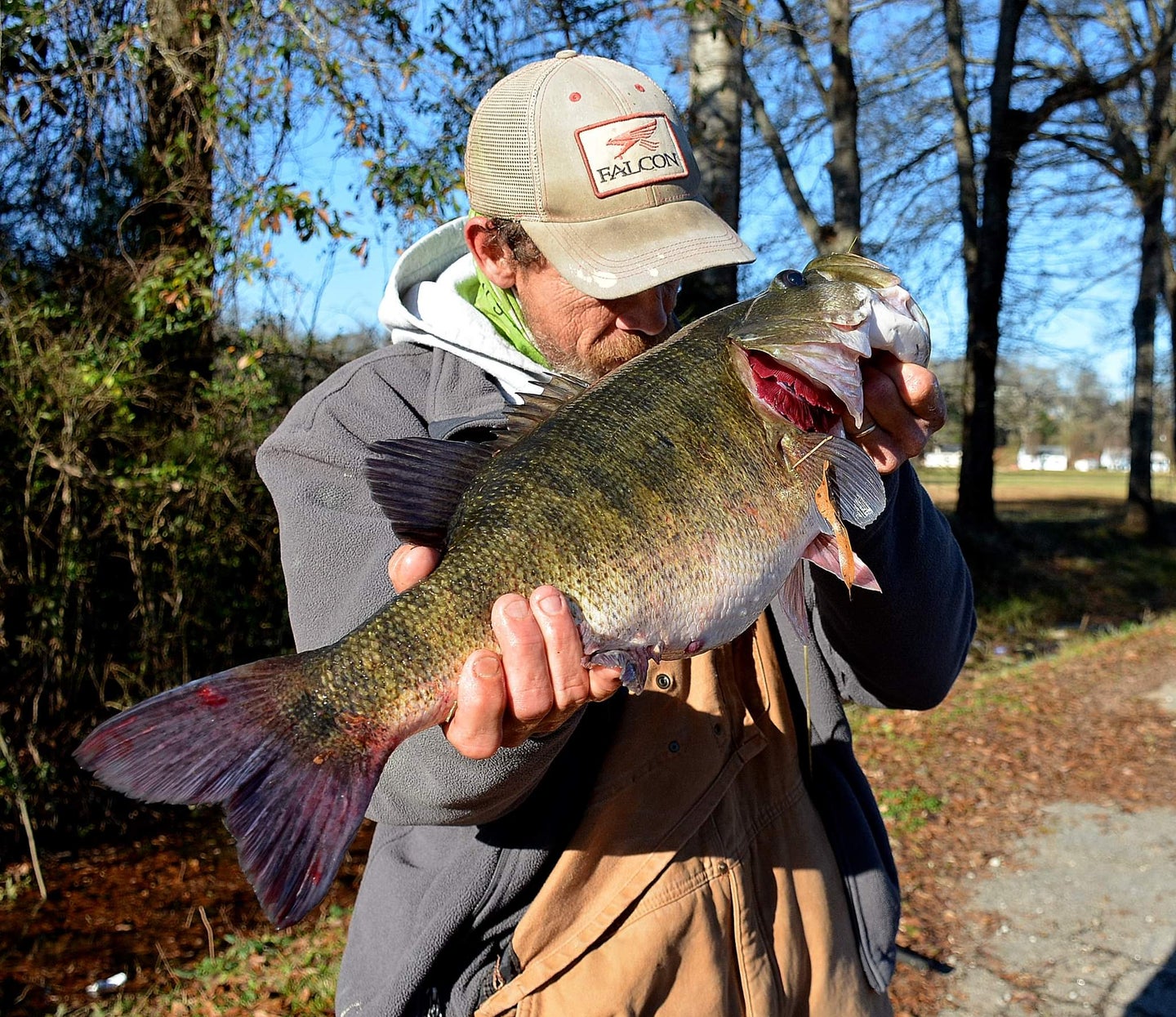 Alabama angler Joseph Matthew (Matt) McWhorter, 47, will likely be crowned the new Georgia shoal bass record holder after catching an 8-pound, 5-ounce fish on December 23rd from the Chattahoochee River near Columbus. A resident of nearby Lanett, Alabama, McWhorter regularly fishes Georgia waters and was out with friends James Filyaw and Jeremy Bagley when, on just his fifth cast of the morning, a big bass nailed his Yum umbrella-rig lure.

The anglers knew the fish was something special, but they couldn’t be certain just how big it was. “The battery was dead on the scale I keep in my bag,” McWhorter tells F&S. “I called my buddy Jody Simms, and he met us at the boat ramp with a small Berkely scale. We weighed it and knew it was close (to the record).”

McWhorter contacted the Georgia Department of Natural Resources, seeking official help to determine whether his bass was heavy enough to break the record. Eventually, an officer arrived from the Albany, Georgia, office with the needed paperwork, and they set out to a local supermarket where the fish could be weighed on certified USDA scales.

Georgia DNR’s Cpl. Eric Isom witnessed the weighing in of the 23-1/4-inch-long live bass. Afterward, McWhorter released the fish back into the river near where it was caught.

“I wanted to do everything I could to keep that fish alive. It was important to keep those genetics going. You rarely find these shoal bass bigger than 6 pounds,” McWhorter says. “I’m looking for someone to make me a replica mount of the fish.”

McWhorter says he fishes for shoal bass much the same way he would target smallmouths. In river systems managed for electrical power, the bite is often best when dams are releasing water, creating current. He says the water was just starting to rise when the fish bit, noting that the river can quickly come up 6 to 7 feet when water is being released through the dam for electricity generation. “It can be a dangerous situation for people who don’t know what they’re doing,” he adds.

Shoal bass were recently designated Georgia’s official State Native Riverine Sport Fish. The bass are native to the Apalachicola-Chattahoochee-Flint (ACF) river system and are also found in the Ocmulgee River. They cover a lot of water during their lifetimes, sometimes dozens, if not hundreds, of riverine miles. They depend on long, unobstructed segments of rivers and high-quality shoal habitats.

McWhorter says shoal bass have been a longtime passion for him. “I’ve dedicated a lot of time, usually covering 10 to 15 miles a weekend in my kayak fishing for these bass,” he says. His fish bested the currrent state shoal bass record, an 8-pound, 3-ounce fish caught in October 1977 on the Flint River by David Hubbard, by 2 ounces. With the official weight recorded and the paperwork complete, McWhorter says all that remains is delivering the documents to the DNR office in Albany. “I’m still on Cloud 9,” he says.