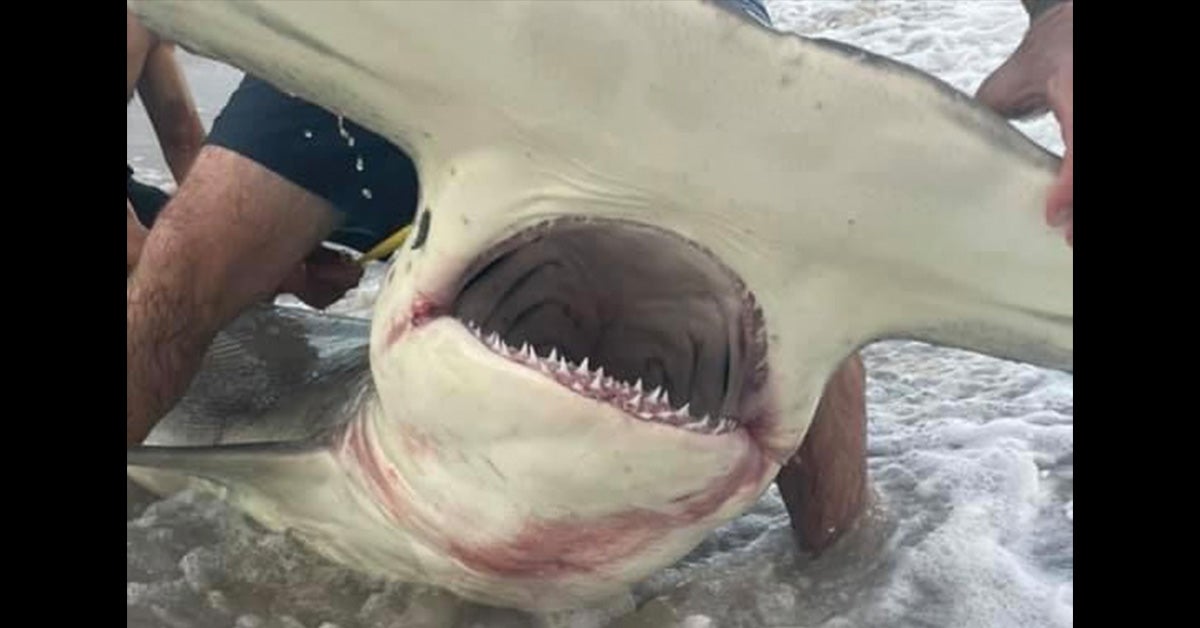 North Carolina angler Blake Cochran has only been targeting sharks for two years, and he’s already caught what he says is the “mystical unicorn” of the land-based shark fishing world: A massive hammerhead shark. Cochran, an emergency medical services training officer, landed the monster on August 21 while fishing with a group of buddies who call themselves the “Reel NC Outlaws.”

“There is no feeling in the world like being hooked to a 700-pound fish from shore. It is literally like being attached to a car that you can’t slow down no matter how much pressure you apply,” Cochran told ABC25 WPBF. “It was an unbelievable experience of a lifetime.”

Landing the Beast was a Team Effort

Robert Murray kayaked a nearly 15-pound grouper head out 450 yards from shore to set the bait, despite capsizing several times while launching the kayak. Chris McCusker and Jeremy Bullard helped drag the shark onto the beach and then back into the water for the release. Eric Allain was the designated cameraman and documented the impressive catch with photos and videos, which he posted to YouTube.

“The camaraderie it takes to bag a shark of this size is a huge part of the sport,” Cochran tells F&S. “It took the work of a great team to move lines, swim baits, and get the shark in. The teamwork made for such a good time and is what allowed me to catch such an amazing animal.”

Cochran was using a heavy-duty rod and reel loaded with 200-pound test braid, along with other specialized leaders and oversized tackle specifically tailored to land-based shark fishing. Even with all of the equipment, Cochran says it all comes down to one thing: winning the fight.

“This sport is extreme,” he says. “We battled with this fish for 45 minutes. The entire time, your physical fitness is being tested. At that point, it is a fight of the fittest to see who will cave first, you or the shark.”

This time, Cochran won out against a “dream fish.” After snapping a couple of photos, he and his buddies immediately turned their attention to safely releasing the shark. In North Carolina, the take of hammerheads is regulated but permitted. Still, Cochran chose not to keep the monster. “Our number one priority when reeling in these beauties is the fish’s safety and keeping them healthy,” he says. “We take a moment to enjoy the fight and beauty in these creatures and then quickly, safely release them. We swim out with the sharks to around neck-deep water, ensuring the fish makes a fast, strong break back out to sea.”

Looking ahead, Cochran has his sights set on beaching other big sharks. He’d especially like to catch a giant tiger shark or a mako. But that doesn’t mean he and his buddies aren’t still reveling in the fact that they successfully landed a giant.

“We are still living on the high from that day with the hammer,” he says. “For us, this is more than a sport. It’s a chance to get away from the everyday and enjoy nature. To reel in a monster like this one, we put the time in and stayed on the beach for days sharing fires, smoked foods, and conversation. Land-based shark fishing truly is a lifestyle and no other sport comes close to it. “