Mark Steward-Brown recently returned from a fishing trip of a lifetime in Spain, which included landing an absolutely giant catfish 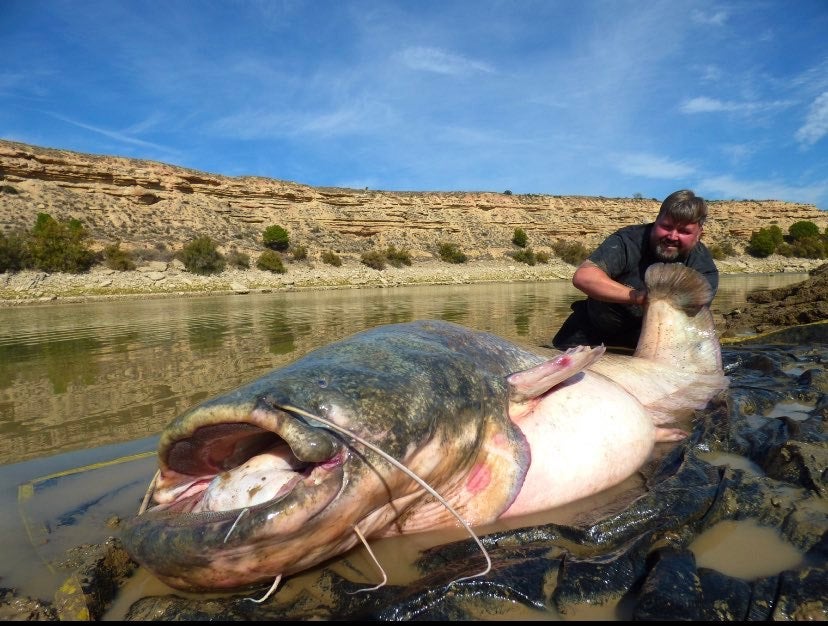 Mark Steward-Brown, an angler from Norfolk, England, went on an epic fishing trip earlier this month to the Ebro River in Spain. Before heading out, Steward-Brown’s personal best wels catfish was a 48-pounder. He caught four fish over 100 pounds on his first day in Spain. But it wasn’t until the third day of the trip that he says he landed an absolute monster—a 234-pound brute.

“The fight lasted 45 minutes,” Steward-Brown tells F&S. “It was full-on tug of war. I had to have the drag set very high to keep it away from the snags, but the initial run was still 50 or 60 meters upstream.”

Steward-Brown and his buddy Billy Malcolm Williamson were fishing with a local guide named Pontus Ingvarsson, who Steward-Brown credits for putting them onto such high-quality fish, especially because the river is so expansive that it takes a lot of expertise to target the correct areas. Steward-Brown had fished the Ebro, which is renowned for its big wels catfish, before in 2019 but hadn’t caught anything above the 50-pound mark. This time, the angler was using a European-style setup called a “hair rig” with a pre-made bait called “halibut pellets. Beyond catching the big wels, catfish, Steward-Brown and Williamson also hooked into some nice carp, which are a common game fish in Europe. They released all of their catches.

“I enjoy fishing for any species,” says Steward-Brown. “But to me, catfish fight harder than any other freshwater fish.”

Wels catfish are native to northern and eastern Europe. They’re known to live up to 50 years old and can reach lengths of over 9 feet. The IGFA all-tackle wels catfish was a 297-pound beast that was caught on Italy’s River Po in 2010. While the catfish that Steward-Brown caught on October 20 did not near world-record territory, it’s still an impressive specimen, and for most anglers, the catch of a lifetime.

“To catch such a big girl like that was a privilege,” says Steward-Brown. “It was truly a great fishing holiday.”