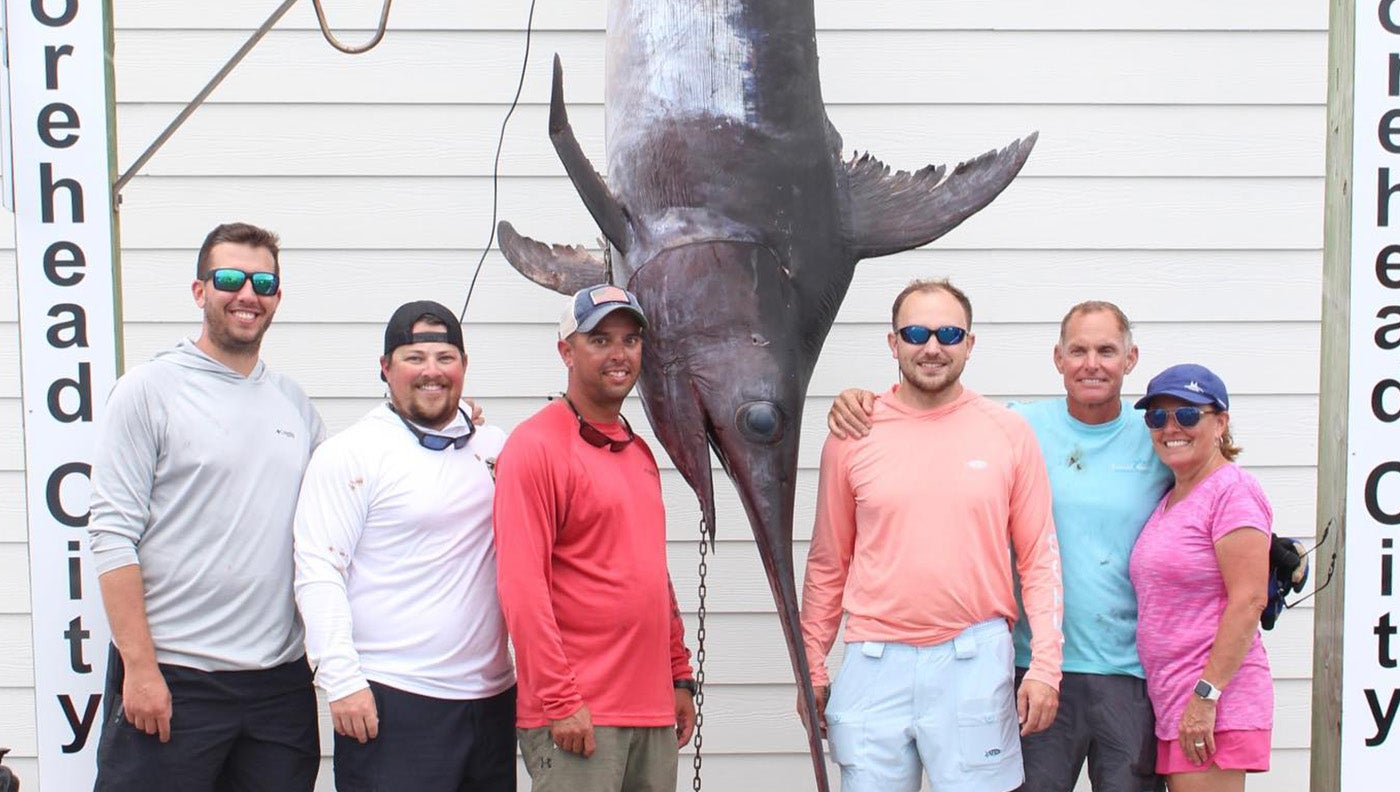 The North Carolina Department of Marine Fisheries has certified a new state record after a father-son fishing duo boated the largest swordfish ever recorded in Tarheel State history. Angler Brandon Carney was captaining his boat over 1,300 feet of open water on August 21 when his dad, Cary Carney, hooked into the record-setting sword while using an albacore belly for bait.

“It started out just like any other day,” Brandon Carney told Field & Stream. “We made our second drop around 10:30 in the morning, and there she was. As soon as Dad hooked into it I said, ‘I think we got a big one.’” As it turns out, “big” was a bit of an understatement. His father’s swordfish would eventually tip the scales at 504 pounds, 8 ounces. It taped out at over 12.5 feet long.

But before the duo could weigh and measure the monster, the Carneys had to get it into their boat. “We had an electric reel, but because [the fish] was peeling off so much line, it blew every fuse we had as soon as we engaged the electric,” Carney said. “We disconnected all power from it, and we were like, ‘Well, I guess we’re cranking this bad boy in.’”

The electrical failure actually allowed Cary Carney’s catch to qualify for the North Carolina state record, as fish caught on electric reels don’t typically make the books. And it made battling the behemoth a lot more interesting. The big swordfish regularly made blistering runs, sometimes descending down to over 2,000 feet beneath the surface. During the course of the fight, Carney says the fish dragged his boat upwards of 10 miles.

Also aboard the boat that day was Shelly Carney,  Josh Meakins, Justin Meakins, and Stephen Beaman. Once Cary finally fought the big bill into submission, the crew had to figure out how to hoist it into the boat. To do this, they tied a rope to its bill and used the vessel’s T-top as a pulley before flopping it onto the deck. “He came up and he was just done,” Brandon said. “He didn’t try to swipe us with his bill. He didn’t try to get away. He came up and was just toast.”

The fish bested the previous North Carolina state record, which was set in 1979, by a wide margin of 63 pounds. According to North Carolina Marine Fisheries, its fork length alone measured 104 inches while its girth was 53 inches. The fish was weighed on a certified scale at EJW Outdoors in Morehead City.

While Carney says that both he and his father were shocked by the sheer size of the swordfish once it finally breached the surface, he’s been even more impressed by the number of meals the 504-pounder has provided. “We did not waste any of the meat,” he said. “We had it on ice. We weighed it and put it back on ice and then immediately cut it up. I think 30 people is a conservative estimate of how many people we’ve shared it with. All of our neighbors and all of our friends have eaten some of it. It’s remarkable.”