How to Catch Fish in Low and Clear Water

Follow these expert tips on how to catch—and safely release—smallies, stripers, and more in the late-summer heat 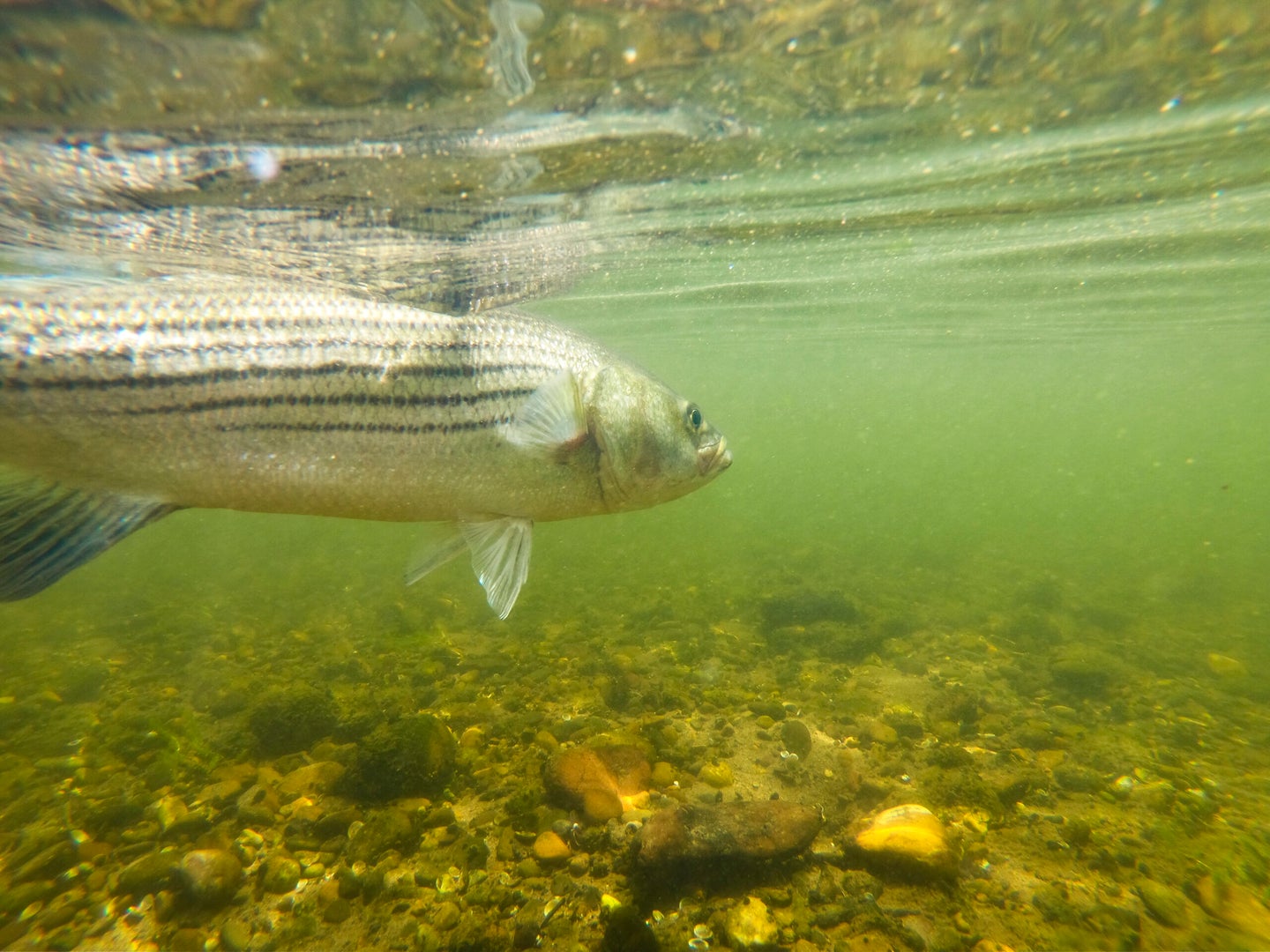 A summer schoolie striper from the low, clear Delaware River gets ready to kick away after a fast fight and plenty of revival time. Joe Cermele
SHARE

First, a disclaimer: You can’t talk about fishing in low, clear river and stream conditions without discussing whether you should be fishing in them at all. Some species are highly sensitive to high water temperatures. This is especially true of trout and walleyes. Serious muskie anglers often take a break when water temperatures rise above 75 degree for fear of fatally stressing the fish. If your main targets are species that thrive in cooler water, giving them a rest during the hottest months is a smart move. But there are also plenty of species that can take the heat, and late-summer conditions can put a lot of heat on you to fool them. If the rock bass and bluegills in the local creek are giving you fits, or the smallmouths in what was a fast-flowing river a few months ago are now driving you nuts, these tips will help.

Stained water is a blessing whenever current is involved. A hungry fish in moving water is often forced to react quickly, because it knows the flow will carry the meal away if it waits too long to strike. In stained water, a fish can see your lure or fly, but it can’t scrutinize it as well, or for as long, as it can in crystal-clear water. This increased visibility is the biggest hurdle in low-water pursuits.

Ultra-clear water makes fish nervous and, therefore, overly cautious. Birds of prey can spot them more easily, which is the main reason why they’ll often only be willing to move for food if they’re absolutely sure that darting from wherever they’re tucked up is worth the effort. This means that a natural presentation, regardless of how you’re fishing or what you’re casting, becomes critical.

As an example, if the smallmouth bass in your local stream respond well to 6-inch flashy jerkbaits in June, you might have to switch to 3-inch weightless soft-plastic finesse baits in August. You’re still matching the baitfish they love, but later in the season, a large, aggressive, rattling jerkbait is more likely to spook them than get them fired up. Even the splash of a larger bait hitting the surface can get put the fish on guard. Scale down your lures and opt for baits that have a subtler action. Avoid gaudy or bright colors in these conditions, too. Instead, try muted tones like white, tan, or black.

Make Long Casts and Fish a Lot of Water

A benefit of low water is that it’s easier to figure out where the fish are holding. Deep holes and pockets are no-brainers, as are areas with enough flow to create a surface disturbance that makes fish harder to spot from above and increases oxygen levels. But what you don’t want to do is cast directly into these juicy spots.

Quite often, you’ve got one chance to get a fish in low, clear water to move—especially when you’re dealing with bigger, smarter targets. If you drop a strike indicator or popper right on their heads, there’s a strong chance the fish will spook or at least develop a sudden case of lockjaw. You need to make an effort to present your lure or fly naturally without being invasive.

One way to do this is by slightly overthrowing your targets. Take your time, think it through, and position yourself to make sure the first cast counts. This means keeping your distance, tucking under bank foliage, or doing whatever you have to do so the fish don’t see you first. If targeting a short river hole, cast long and upstream. You want the splashdown to happen well away from the key zone, and you want time to get the lure working before it reaches that zone, helping to sell the ruse of unfortunate forage naturally wandering into the wrong spot. If you don’t hook up after one or two attempts, move on. Bombarding a spot in low, clear conditions is rarely effective. You’re better off covering more water until you find a willing player.

Go Early and Stay Out Late

Given that enhanced visibility is such a hindrance in clear water, it makes sense that the fishing will be tougher at high noon than during low-light periods. But there are other benefits to a dawn patrol or late-night session. The biggest is arguably the health of the fish. Regardless of how hot it is during the day, a river or stream will usually cool—if only a degree or two—overnight. The cooler the water, the less stressed a fish will be after a fight, and the better its chance of survival will be. Plus, in many cases, fish are simply feeding more aggressively after dark in summer. With species like trout and river striped bass, I rarely target them except at night during the peak of the summer heat. Even if I catch an inadvertent striper while chunking catfish during the day, I want it off the hook as quickly as possible and I’ll spend extra time reviving it so it kicks away strong.

Health benefits aside, nighttime missions are just downright fun and add a whole new challenge to the game. Catching a smallmouth on a mouse fly at midnight, or having a striper smash a topwater lure at 4 a.m., helps hone your sense of feel and learn to rely on your ears instead of your eyes when fishing. You’d be amazed how fishing in the dark makes you a better angler when the sun is shining bright.